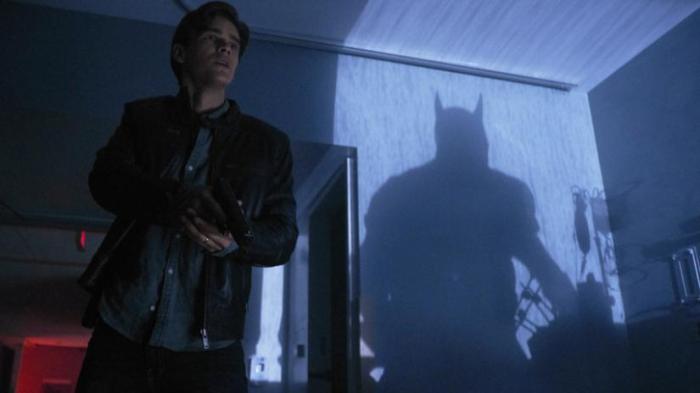 Dick confronts his past, and the most famous shadow in Gotham

The live-action Titans show gets to the end of their first season, ending on a few different cliffhangers. This is a season finale, so there will be spoilers below.  Last episode, Rachel was manipulated into bringing her father, Trigon, to Earth, which is bad news for just about everyone alive barring Trigon and Angela. Dick managed to get back to Angela’s house and rush in, piercing the barrier that cloaked the house and kept Kory and Donna out. That left Dick, Rachel, Gar, Angela, and the newly-arrived Trigon inside. Those aren’t great odds.

Instead of some kind of desperate fight, what we get is an entire episode of a very dark future for Dick Grayson and Gotham City. I’ve said many times before that when you see superheroes in the future, it’s never a good scene. Well, this one starts off decently and goes south quickly. We do get to see the majority of the cast as this goes on, as well as several other significant characters. Sadly, one of my personal favorites, and the best-portrayed in the series, is one of the ones who doesn’t show up.

A few years in the future, Dick is lounging in the pool and downing a beer when he gets interrupted by his son jumping in with him. Clowning around and chasing each other inside, Dick and young Johnny run into Dick’s wife, who turns out to be a very pregnant Dawn. They get a video chat from Rachel and Gar, who are apparently at college in Chicago together. I have no idea why this show keeps returning to Chicago. We know the domestic bliss isn’t going to last, and the change is preceded by a strange, glowing glitch we see several times throughout the episode. Little Johnny reports that someone is coming up the driveway.

The visitor proves to be a wheelchair-bound Jason Todd, bearing assorted dire news from Gotham. The Joker has killed Commissioner Gordon, Alfred apparently died some time ago, and Barbara is missing (first series mention of Batgirl). Batman has gone off the deep end, swearing vengeance, and Jason is worried that their mutual mentor means it. Jason implores Dick to return to Gotham and talk some sense into the Dark Knight. Bruce hasn’t been the same since Dick left, Jason reports Alfred, Barbara, and even Superman having said (first series mention of Superman), and Jason thinks Dick is the only one who can get through to the Batman. Over making dinner, Dawn and Dick debate what he should do.

To no surprise at all, the next scene is Dick taking a cab from Gotham airport. The cabbie provides some colorful commentary about the decline of the city, and, to Dick’s question, makes a hotel recommendation… in another city. The drive through the city looks like something out a post apocalypse movie. Gotham is worse than any version of it I’ve ever seen. His check-in at the hotel isn’t much better. Dick is already wondering why he’s here, and then the tv shows the sparkly distortion again, as the new Police Commissioner announces Gotham is now anti-vigilante. Each one of the after-effects from these sparkles seems to be designed to make things worse for Dick. After more sparkles, his next door neighbors go from loud sex to louder violence, and Dick calls the cops. Things sound worse, and Dick takes direct action, narrowly avoiding an unpleasant incident with the cops. When Dick gives some of his background, one of the cops asks, “Who the hell comes back to Gotham?” That right there should tell you how bad things are.

While talking with the cops, Dick hears a special “mask call” and goes to the scene. If nothing else, Batman is a man of his word, and he’s taken action about the Joker. Dick has some words with Captain Finney, lead investigator. Finney is also who we saw when Trigon came through to answer Rachel’s call, and is played by Seamus Deaver, best known as Detective Ryan on Castle. Dick makes a few suggestions, he and the captain chat, and he pleads with Dick to stay and help, since he seems to know something about Batman. Things change slightly when everyone is surprised to learn Batman wasn’t wholly successful.

Dick goes to Wayne Manor (also known as the X-Men’s headquarters and Luthor mansion) to try and talk to Bruce. The darkened, empty Manor is creepier than usual, and the access to the Cave won’t open all the way. Dick makes his plea to his mentor and finally walks away. We see that someone is watching him via monitors. Next up is the hospital, where Dick follows up on the earlier chaos, and runs into Kory. She’s now an FBI agent, is hiding her past from the Bureau, and even makes an X-Files joke. Their debate about what Dick should do is interrupted when the sparkle effect hits again and Batman comes back to finish his earlier attempt, and leaves, ignoring Dick. A frustrated Dick goes back to the hotel and takes more direct, brutal action with his abusive neighbor.

At wits’ end, Dick calls home. The chat with Dawn doesn’t go smoothly, and gets worse when he learns Hank is there. Dick isn’t going home yet, because Batman can’t be saved anymore, but has to be stopped. This gets reinforced when Kory calls and summons him to another familiar place. Arkham is a slaughterhouse, and Two-Face, Scarface and the Ventriloquist, and many other inmates, and even staff, are among the dead.

Finally convinced Batman is irredeemable, Dick goes to Captain Finney with Batman’s secret. After some disbelief, they work out an operation to take down the Bat, raiding the Manor and the Cave. This goes about as well as you’d expect a fight between overconfident cops and a Batman gone to the dark side to go. Kory tries to help, but Bats has a lot of toys, including some captured weaponry from foes. Apparently in this world, a Mr. Freeze gun beats starbolts. Dick rushes in, wading through the rubble. Once he gets past what appears to be Kory’s body, he finds Batman pinned under debris. Dick gives in to the dark impulses that have been plaguing him all season (utterly out of character for any other version of the hero I’ve seen). The episode ends back in the real world with an ugly scene involving Rachel, Dick, and Trigon. There’s an after-credit scene that hints at new characters that are sort of part of the more modern Titans teams, but not the classic ones.

What I liked: This version of the DC Universe (definitely not either the CW or Expanded/Movie one) keeps growing with nods to new important characters in this episode. It was good to see Seamus Dever again. It was disturbing to see, but the fight in the cave was some of the best action I’ve seen on the series. I’m not wild about the Dick/Dawn pairing, but their home scene was well done. The X-Files reference was entertaining. The end scene hinted at interesting things to come.

What I didn’t: I just don’t like this version of Dick Grayson. I know I’ve said that several times, but I don’t. This feels utterly alien to the character who has been my personal favorite for decades. I don’t get why Donna was the only recurring character they excluded from this weird nightmare. I don’t really like the fall of a great hero.

I have some mixed feelings about this as a finale, but it might have been the best of the season. I’ll go 3 out of 5. Titans has already been renewed for Season Two, the only of DC’s live action shows so far that has been.