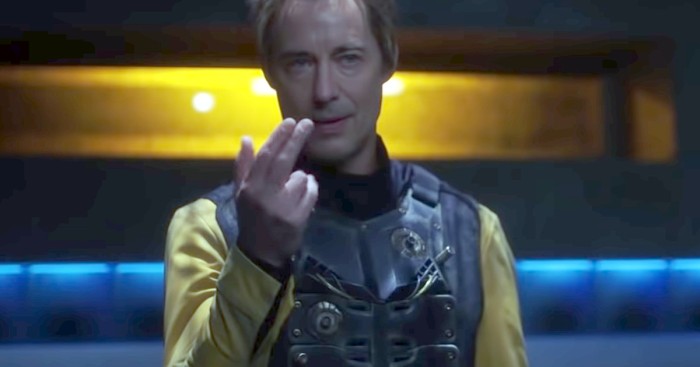 Last episode, the team learned Nora’s big secret. This episode deals with the fallout, and gives us some insight about how things happened. Essentially, it’s the secret origin of Nora West. Honestly, it’s an episode where the cast ends up in one of two categories: not looking so good, or essentially window dressing, with one sole exception in my opinion. But “Godspeed” does answer a lot of questions. The episode was also directed by Danielle Panabaker, Caitlin Snow/Killer Frost herself. There are all sorts of callbacks to early episodes of the show, and the DC Universe in general.

It opens with the team still shocked about learning that Nora’s been reporting to Eobard Thawne this whole time. Nora herself is sitting in a cell in the Pipeline, imprisoned by Barry as soon as he learned about her alliance. Iris and Barry are already disagreeing over what to do about her while most of the others look on. Sherloque Wells offers some suggestions, and many of the characters turn on him. I agree with his observation that their anger is misplaced. Iris has been after him for most of the season to essentially leave Nora alone, she certainly wouldn’t have listened to his suspicions. And I’m not sure most of the rest of the team would have, either. Sherloque isn’t exactly one of the more likable Wells. Wellses? However you choose to say it. Ralph, the often-overlooked detective (both here and in the Justice League), makes the suggestion to consult Nora’s journal, which is the body of the episode this week.

In 2049, Nora is a CSI tech like her father who babbles more like Felicity. She arrives at a crime scene, late, and sets to work under the watchful eye of Detective Frankie Curtis. The truck that was robbed is from Dayton Labs (Steve Dayton is Doom Patrol member Mento, and adopted father of Gar Logan, Changeling of the Teen Titans (Sorry, still hate the reversion to the Beast Boy name)). The robbery happened with no one seeing the thief, but there’s some kind of high-tech camera in the truck that makes Nora squeal with tech-nerd glee.

At the CCPD CSI Lab (Barry’s old lab, refitted for the future), Nora talks with her best friend/lab buddy Lia (Lia Nelson is the Flash of Earth 9/the Tangent Universe) about the crime. Nora is convinced it’s a speedster stealing things, but Lia counters that A) Nora is obsessed with speedsters and B) there haven’t been speedsters in Central City, maybe all of Earth 1, for decades. We know Barry disappears, but what happened to Wally? Lia also references Iris calling Nora “excessive,” (hence the eventual codename), and points out she’s got a murder board about the Cicada case, much like Barry’s in season one for hunting Reverse Flash. The super-camera confirms that it was, in fact, a speedster-thief.

Nora returns to her favorite haunt, the Flash Museum, ducks a call from her mom, and studies the Reverse-Flash exhibit. She passes a museum patron who gets just enough screen time for us to know he’ll be significant later, and then the museum curator Dexter Myles (Robert Picardo, AKA Voyager’s EMH) announced the museum is about to close and Nora needs to call her mom. Talk about parental embarrassment. Nora, suitably harassed, calls Iris back for a chat that doesn’t go well. Iris isn’t thrilled with Nora spending so much time at the Flash Museum, and Nora won’t talk about open CSI cases with Iris, who is probably still used to doing that with Barry and Team Flash. Iris is out of town covering a news story in Coast City, California home of Hal Jordan, Green Lantern. GL is one of the heroes that’s been teased several times throughout the Arrow-verse but never actually appeared.

Lia calls Nora to meet her for a clue, and they go to Ollins Chemicals, a really obscure company from an old Firestorm comic. The chemist there has a few ideas about the stolen chemicals, but can’t give them a definitive answer. As the two CSI’s leave, they see a blur of lightning, and Godspeed, the titular villain, shows up to steal more stuff. Godspeed is a minor villain from the Flash comics. Nora tries to stop the speedster, and gets blasted by lightning into a rack of chemicals (boy, that sounds familiar…). She comes to in the hospital with a concerned Lia standing over her, playing Poker Face (the same music Barry woke up to back in the pilot episode). Nora reassures Lia she feels oddly good, and Lia shows her a metal bit that was taken out of her shoulder by the ER staff. Nora gets a very Flash-familiar moment of discovering she has powers, and ends speeding into a truck outside where she crashed into laundry. Not only did this happen to Barry when he was first trying to get a handle on his powers, but the truck is labeled “Gambi and Sons,” which seems like a nod to the Black Lightning show.

Back at work, the pair test Nora’s new-found abilities, and run various possible codenames by each other. Lia does not have Cisco’s knack for that at all. When Nora hears about a bank robbery in progress in the radio, she gets a bad idea that Lia warns her about. Why CSI techs are listening to the police radio, I’m not sure. Nora speeds to the scene, shows she has no idea how to use her powers, accidently helps minor villains Bug and Byte escape, and does thousands of dollars worth of damage to various CCPD property. Not a great start for a new hero. Lia tries to reassure her shaken friend with the knowledge that the cops arrested the villains shortly after the debacle. Nora realizes the CCPD isn’t set up to capture someone like Godspeed, so she goes to the only person she knows of that can give her advice. While it’s a bad choice in the long run, it’s largely Iris’ fault for keeping secrets, since Nora didn’t know she had other allies to turn to for advice, maybe even actual help.

Nora journeys to Iron Heights, using her police credentials to get in to see Eobard Thawne, the Reverse Flash. The scene has a few different dynamics going, as it’s very reminiscent of Clarice Starling and Hannibal Lecter in Silence of the Lambs, and he uses Sherlock-like deductive powers to figure out she’s a new speedster. After she’s escorted out, (seriously, what is the point of a five minute visit?), we see Thawne’s treatment in the prison wouldn’t exactly meet ACLU standards. Nora goes back to talk to best friend Lia, who has bad news. Lia had identified the metal from Nora’s shoulder, and it wasn’t random shrapnel. The power damper was traced to STAR Labs, and Nora works out her mother has been lying to her for a long time.

Jitters has survived into 2049, as Lia and Nora go there to figure out how to handle this news. Nora figures out at least part of what the speedster is up to, and she and Lia go to Stagg Industries, comic book home of Metamorpho. They are trying to prevent the speedster, dubbed Godspeed at some point, from getting what he wants. Instead, Nora’s first villain battle goes horribly wrong with tragic results. Godspeed is voiced by BD Wong, whose roles include Professor Hugo Strange over on Gotham.

In the present, the team is shocked by the sudden twist in Nora’s story, and Iris comes to a resolution. She goes to the Pipeline and frees Nora, warning her not to make her regret this. Barry isn’t happy, but then, the couple isn’t consulting each other well at this point. Returning to Nora’s tale in the future, the fledgling speedster has an angry confrontation with her mother that goes really badly. Iris’ self-justifications come across badly, and Nora ends the discussion by speeding back to work. Detective Curtis offers Nora time off for her grief, but Nora wants to catch Godspeed no matter what. They have learned the villain is August Heart (the guy from the museum), who was kicked out of Mercury Labs (a part of seasons one and two of the show) for doing illegal experiments on people.

Back to the Flash Museum, Nora studies the Reverse-Flash exhibit and figures out the bad guy is making a version of Velocity 9, a speed drug from both this show and the comics. Nora returns to Iron Heights to plead with Thawne to help her once again. He refuses, and even calls the guards on her. She’s taken away, but not before seeing what’s happening to the prisoner, and his finally agreeing to help.

Now at Central City University, Nora creeps around while Thawne plays Oracle/Overwatch in her ear, talking her through superspeed breaking and entering. Godspeed pops up again, and they engage in a chase through the city. Nora panics and doesn’t follow Thawne’s advice at first. Finally, she gathers up her courage and leads Godspeed into an unlikely trap that looks like it might have killed the meta-villain, although we learn later he’s in custody (presumably in a hospital at the very least).

Nora’s surprises aren’t over. She once again pleads with Thawne to teach her, and he again refuses, but he does send her back to the Museum after asking how much she knows about The Flash. Following Thawne’s advice, she steals his Reverse-Flash ring from the exhibit, which apparently has no security at all, and uses it to enter the Time Vault. Inside, she finds special cases holding Flash Rings from Choi Industries (Ryan Choi is Ray Palmer’s successor as the Atom) and then activates Gideon in a scene similar to Barry’s first encountering the AI. She finds out Barry was the Flash, gets a message recorded for her during the Crisis (with Oliver yelling in the background as a battle rages on), and sees many familiar costumes hung up.

Her tale over, Nora tells Barry she just wanted to meet him and Thawne showed her how. Barry, anguished, asks how she could keep going back to Thawne even after learning all the madman had done to Barry and his family. Barry clears the room to berate his wayward daughter and then makes another snap decision. Telling her he can’t trust her, and can’t have anyone there he doesn’t trust, Barry rushes her back to her own time, and warns her he will know if she tries to come back. Barry then has an angry confrontation with Thawne, and we learn what the countdown in his cell means. For the record, I had guessed that a while ago.

What I liked: The nice nods to both show history and DC Comics lore were great. Nora’s origin at least makes a bit more sense now. I liked Lia, and wonder what happened to all the speedsters. Sherloque was right that he had only done what he was supposed to, and that the others really have no call to be mad at him. He’s the one I referenced in my opening as the exception to looking bad (Barry and Iris) or being glorified extras (everyone else). Danielle Panabaker did a fine job directing. I really enjoy the Flash Museum.

What I didn’t: The few characters that got to do things this episode had a lot of trouble justifying their actions, or will down the road. We never hear Nora explain why she kept going back to Thawne, future Iris did something unforgivable, Barry is making rash decisions without talking to people. The trap for Godspeed didn’t make a lot of sense, even in comic book science terms. I think emotional fallout from this episode is going to linger, in lots of not good ways.

Even with the questionable decisions, it was a pretty good episode. I’ll give it a 3.5 out of 5.