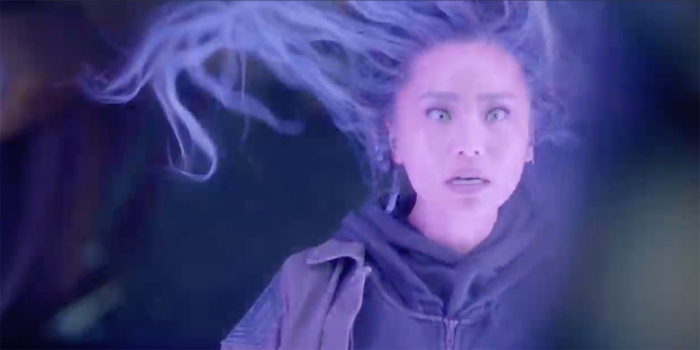 What do you mean they don’t know if we’re getting a third season?

Things are getting worse and worse for the good guys on “The Gifted.” They are getting near the end of the season, and so far, a new season hasn’t been confirmed. That to one side, this episode has a lot of character deaths, both background extras and some named ones we’ve had since the beginning. I’d have to say “calaMity” was well named.

The show opens four years ago, as Benedict Ryan does a radio show in a much smaller market than we’ve seen him in recently. The station clearly has technical and maintenance issues. After he gets done yelling at his producer, a familiar face shows up and offers him a deal, which is the start of an unusual alliance Lorna and Marcos discovered a while ago.

In the modern era, there’s another meeting, and Ryan gets some new information. His source is pointing him at a new target for the Purifiers. It bodes ill for some of the characters we’ve seen before, and it ends up echoing one of the more brutal storylines from the X-Men comics in the 80’s. I was surprised at a few of the things that happened here, although I saw some of them coming.

The Strucker family drama continues in their apartment. Lauren is sleeping, restlessly. Caitlin and Reed have a very intense discussion about some of the things he hasn’t told her. While I get her being upset, let’s face it, she’s not exactly wholly forthcoming a lot of the time. Add in her penchant for wandering off alone, or at least away from the group, and getting in trouble, and I’d say they’re even.

Esme reports to Reeva that their trap for Lauren didn’t work, and Reeva shrugs it off with the news that they have a spy in their midst. Reeva is convinced that Max not coming back means he’s been ambushed, and tells everyone there is a traitor. Heather, Max’s buddy, jumps on that bandwagon, saying he’d have come back, while Lorna, both realistically and self-servingly, points out he’s a drunk and might be sleeping off a bender. Things are tense in the Inner Circle.

Marcos and John are at their place, talking about the states of their respective love lives. Neither are happy about where their lovers have ended up, and they argue a bit over who has it worse. Marcos is actually looking pretty good for a guy who just got shot. Clarice/Blink gets into an argument with her fellow Morlocks about helping more mutants vs. resources and security. Blink is very impassioned about this. Ryan passes on his intel, giving Turner a pep-talk/propaganda rally about the Morlocks, which essentially boils down to “How dare they live their lives safe from us?”

At the Inner Circle, Lorna finally slips back to her room to call Marcos, only to find out cell service has been jammed. In the hallway, Andy is annoyed that the elevators have been disabled. Both confront Sage, who says she’s sorry but it’s not her decision. Wilson and Turner arm up their Purifiers, and Wilson appeals to Turner to be included in the mission. Eventually, reluctantly, Turner agrees.

The Struckers talk about Lauren’s condition, Spanish classes, and the dreaded music box’s effect on both Lauren and Reed. They talk about the darkness within each of them, and Caitlin finally comes clean about the trip to see her brother and the battle against Sentinel Services down there. Caitlin is also worried that there’s not a good option for treating Lauren.

In the tunnels, Blink and Erg’s awkward moment involving apologies and lack of shirts gets interrupted when Mason brings news of intruders in the tunnels. Erg leads his people through their usual preparations, and a new Morlock called Membrane uses his power to spy on Turner and company. Blink recognizes him and tells the others they need to get out. She also calls Marcos and tells him they’re going to need help evacuating the non-combatants, which unfortunately is most of the Morlock population. As Turner solves the riddle of some of the defenses, John is hurt that Clarice called Marcos instead of him.

Reeva tells the Inner Circle that Max is dead, and they will find out what happened. Esme says she hasn’t been able to find out anything yet from the cashier at the liquor store where Max’s car blew up (with help from Marcos), and Reeva tells the Frosts to push harder. Reed gets a call about the attack on the tunnels, and the Strucker family goes to help after a bit of disagreement over who is going. The Purifiers get a taste of Morlock power as they find the defenses aren’t just all smoke and mirrors.

Blink warns the kids she’s helping to pack light before bringing the first group to the alley meeting point via her power. John tells her to call him next time, and he’ll always come for her. The Purifiers, losing men without even having seen a Morlock yet, debate what to do next. Lorna goes to Reeva’s office and asks how long they’re all going to be locked down. One of the Frosts comes in, kicks Lorna out, and tells Reeva they know who the spy is. Reeva handles this with her usual patience and understanding, decreasing the cast by one. Andy brings the news to a friend, and seems perfectly fine with the summary execution. That kid is messed up.

The Struckers have a family meeting en route to the rally point, and both Reed and Lauren decide to stop taking the X-gene suppressor. Caitlin is worried about this. Erg and the others get over-confident and fall prey to a Purifier trick. It was a decent one, I have to give them points for that. A team of Morlocks is killed and the last of the defenses are pretty much gone as the Purifiers stalk forward. Blink pushes her evacuation efforts faster. John warns the cops are on the way, and Blink admits she was wrong about something she said to John a while back before going to get more refugees.

The Purifiers breech the last of the defenses, and there’s a pitched battle with losses on both sides. Erg makes a huge difference before Turner figures out exactly how his power works and shifts tactics. Most of the remaining Morlocks die. Blink stages a last-minute getaway, but someone doesn’t make it through the portal and is apparently mortally wounded before we lose sight of them. Caitlin makes her own break for freedom when she finds that, despite that fact the serum was “wearing off” earlier, Lauren’s powers aren’t back yet. Turner leads the group through what’s left of the Morlock home, and sees something that makes him doubt their mission just a bit.

What I liked: I really am getting to loathe Turner, but he’s a smart fighter. The Morlocks would have won easily if it wasn’t for him. I applaud Lauren’s decision about the meds, and at least understand Reed’s. Caitlin and Turner both keep showing the value of skill and determination, even when surrounded by superpowers. I was glad John put aside his hurt enough to both help Blink and assure her of his devotion. I’m glad Caitlin finally ‘fessed up about Atlanta.

What I didn’t: The Mutant Underground keeps suffering loss after loss, and they seem to be steadily losing ground. Marcos recovered remarkably quickly from his bullet wound for a guy with no healing powers. Andy seems to have taken up residence on the Dark Side and I don’t see a way back for him. I’m not sure about this reenactment of the big Mutant Massacre storyline from the X-Men.

I’ll give it a 3 out of 5. With the end of the season, and possibly series, rapidly approaching, I’m not sure how thing are going to shake out here, but it isn’t looking great for the good guys.