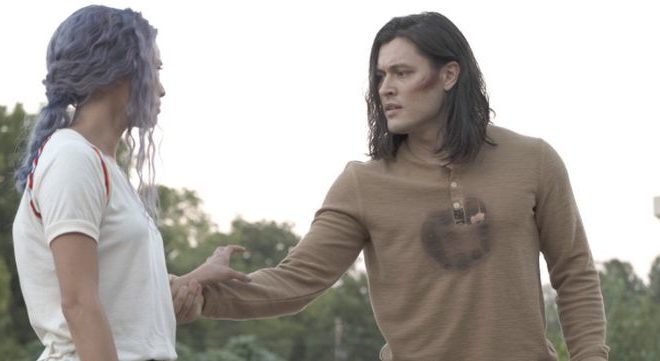 Hey! I LIKED this shirt!

The Gifted continue their run as “least lucky superhero team” as their season continues with “hoMe.” This week’s opening flashback is set 14 years ago in Gainesville, Florida, and we get to see some of Clarice’s early teen years. It’s not a pretty picture. Back in the present, she wakes up to find John doesn’t really understand the concept of bed rest. She does prove very persuasive, though.

Lorna and Marcos argue about her going back to the Inner Circle. Marcos is disturbed by Reeva’s meeting with Benedict Ryan (I bet Ryan and Supergirl’s Lockwood would get on very well). Lorna insists that she has to stay put as the only source of information on whatever attack the Inner Circle is planning. Lorna apparently doesn’t get on well with Underground leader Evangeline, but will try and help regardless. Marcos eventually reluctantly agrees, not that he really had a lot of choice in the matter.

Evangeline meets with our heroes, and is cautiously hopeful about Polaris/Lorna’s most recent shift in allegiance. Evangeline is going to call a meeting of all the Underground leaders, and wants Erg to attend for the Morlocks. Clarice is sure he won’t come, but Evangeline reveals some previously unknown history between her and the Morlock leader.

Lorna, back at the Inner Circle, goes down to the training room where Max and his fellow new recruits are breaking up dummies. After she demonstrates her own power, she tries again to get some information from him about what he’s up to, and the others hush him up, leaving her annoyed. Caitlin shows she’s been working out, but is surprised when Reed tells her he’s been keeping track. He’s worried about Evangeline getting them enough help, but Caitlin, continued her obsessed demeanor of late, wants to do more, and hits on the brilliant idea of going to her brother Danny for help. Danny, who already turned on them once before and believes they are dead. Good plan, Cait. Caitlin decides to go see him in person, and Lauren wants to come along. Reed is outnumbered and wisely cedes the field.

Laruen goes back to fiddling with her music box and translating the papers she found hidden in it. First she learns more of Andreas’ plan, then gets another vision in really unsubtle coloring as she once again confronts Andy. They argue, then fight, and she kicks his ass this time. A surprised Andy wakes up back at the Inner Circle, finding a bloody nose and then a room full of Frosts. He tells them about the dream encounters he’s been having, and they say it’s not safe for Lauren to be out there anymore. No, that doesn’t sound ominous at all. The Frosts leave, argue amongst themselves, and two out of three of them decide on an ultimatum.

John, Clarice, and Marcos meet up with a very grumpy Erg. He agrees to come along, but is clearly not happy about it. Marcos calls in a status update to Reed. Reed messes around with the infamous music box (I think the damn thing is cursed) and gets a flashback from his childhood. Fighting free of the vision, he knocks the box to the floor and finds Lauren’s hidden papers. Caitlin and Lauren stake out Danny’s church, chat about Caitlin’s new hair color, and give Danny a big surprise.

Erg relates his version of his and Evangeline’s history, and paints a ruthless picture of the Underground leader, revealing a few surprises. John tries to rally Erg to the cause, but the Morlock will have no part of it. This leads into another flashback from the same night for young Clarice. Danny brings Caitlin to her grave and talks about the funeral. They disagree about music, and she asks for his help. He’s about as happy as both Reed and I figured he would be, less so when he learns about Andy’s involvement in the coming trouble.

The Frosts give some last minute instructions to Max and his group about hitting the targets only. Max is his usual cocky self, and the Frosts put him back in his place a bit. Lorna tries again to find out what’s going on, and gets enough of a clue to call Marcos with a hurried warning. John, Marcos, Erg, and Clarice rush off in their old SUV. If only they had some way to get places faster… wouldn’t that be nice, Clarice? I’d think she at least knew one place closer than where they were.

Andy has a chat with Lorna about the idea of recruiting Lauren, whether she likes it or not. Lorna doubts even the Frosts can make someone believe in a cause if they don’t. Reed gets a bit further in Andreas’ papers, and has a bad reaction on several levels. Lorna tries to pump Sage for info about the hit team, fails, and has a pointed conversation with one of the Frosts instead. The Frost, I’m fairly sure it’s Esme but who can tell, warns Lorna to stop meddling with Andy.

John and company get to the site of the meeting in time to see the ruin of the building being dealt with by fire companies, and several body bags. John wants to rush in, but Clarice talks him down. Erg takes a very much, “Well, that’s that,” attitude, and won’t listen to John’s pleas for help. John and Erg argue and John gets a demonstration of Erg’s powers, pissing off Marcos, although what he thinks he’s going to do I’m not sure. Clarice argues for calm.

Lauren and Caitlin wait for Danny and talk about Caitlin’s wild youth. Lauren tells Caitlin about her and Andy’s latest clash, and Caitlin encourages Lauren to keep getting stronger with her powers. Danny arrives, pissed off, and babbles a bit before finally revealing he’s wearing a wire. Apparently, the Inner Circle has some sway at DHS. Lauren helps them get away with a truly impressive display of power that’s going to move her well up on the Most Wanted list. The Frosts visit Andy again and put on the hard sell about bringing Lauren, and his parents, in to the Inner Circle.

John is taking a few moments to recover, but he’s not done having a crappy day. Clarice explains how Erg’s power works, finishes the flashback we’ve been seeing of her younger days, and decides she can’t handle John’s commitment to what she views as a lost cause. Caitlin and Lauren drive homeward, talking about their close call and agreeing to hide the details from Reed, because making relationships under stress already bear the load of secrets is a great plan, right?

Marcos and Lorna meet up to discuss their failure to save the day, each feeling down about how everything is going. I don’t blame them. So far, the Underground is in dead last in a four way race, and things keep getting worse for them. Erg does his best to console Blink. Personally, I think he has designs on her. Caitlin and Reed catch up, each keeping secrets from the other. John just sits there, overwhelmed by the day. Andy finally agrees to let the Frosts “help” convince Lauren to come to the dark side, and the episode ends on an eerie similarity between the siblings.

What I liked: Lorna is wising up, albeit a bit too late. I don’t much like Erg, but I get his point of view. I admire John sticking by his beliefs in the face of everything. Lauren is becoming quite a powerhouse.
What I didn’t: Caitlin is obsessive and willfully blind. That’s a bad combination normally; in these circumstances, she’s going to get someone killed. Of all the couples doing the splits, I really think Reed (and the Underground) would be better off without Caitlin. I get that the heroes can’t win all the time, but if they never win, it’s not really a lot of fun to watch. They better pull off some kind of miracle by the end of the season or there’s not going to BE an Underground left. I’m not going to be watching a show about the unstoppable, never-failing, Inner Circle and their merry band of murderers.