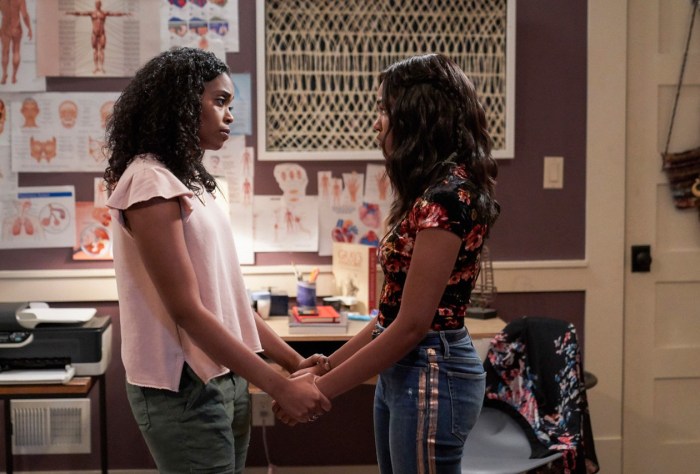 Sister bonding moment amid the chaos

The overly long titles continue in season two of Black Lightning, with “The Book of Consequences: Chapter Four: Translucent Freak.” The episode opens with what seems to be a big event, possibly Prom Night, for Jennifer. She comes down stairs, Jefferson is snapping pictures, everyone is thrilled. Then an uninvited guest shows up and things turn ugly, with Jennifer displaying both fighting skills and a control of her powers we haven’t seen before. Eventually, we learn this isn’t what it seems, and Jennifer laments her lack of progress.

Tobias Whale is in interrogation, playing the wounded victim, and annoying the hell out of Deputy Chief Henderson. They bicker back and forth, and we learn that either Tobias or the writers don’t know what translucent actually means. Henderson goes see Miss Montez, who I believe is the DA, and finds out things don’t look great for the prosecution.

Jefferson has another uncomfortable get together with Gambi when he finds out what Anissa has been up to, and that Gambi helped her. Gambi makes some good points on his own as they argue. Once he gets home, Jefferson argues a lot with Anissa. Things go badly, and he hits the parental nuclear option of “As long as you live in my house…” which has the predictable comeback from Anissa. Later, as Anissa packs, she and Jennifer have a teary parting scene. The good will is interrupted when Anissa finds out Jennifer has been texting with Khalil, which no one but Jennifer thinks is a good idea.

Trying to work out how they got here, Lynn wonders if the paid so much attention to Jennifer they ignored Anissa’s own issues with her developing powers. They commiserate over the difficulties they are both having, and then Jefferson gets a call from Henderson. Jefferson goes to Henderson’s office to hear the latest bad news. Jefferson shares a secret from the past, and Henderson has a bitter, if understandable, reaction. They aren’t making much progress towards rebuilding their friendship.

Gambi’s work at his shop gets interrupted when he gets an alarm, and goes to check on Kara Fowdy. Gambi tells her some things she needs to know but doesn’t want to hear, and she’s not happy to hear it. At Garfield, things keep getting worse for Jefferson. His looking depressed at his classroom desk gets interrupted when a fight breaks out in the hallway. He goes to deal with it in his usual manner, but gets a sharp reminder that he’s not in charge anymore. He tries to argue with Principal Lowry, and Lowry isn’t listening. Pierce really can’t win on any front this week.

Anissa goes to Gambi’s, and he agrees to take her in (shades of Nora moving in with the Wests on Flash). At the ASA facility, Dr. Jace runs her own experiment on one of the pod kids, which shows how much she doesn’t care and how bad off most of those kids are. Lynn isn’t pleased. Jefferson gets home and has an argument with Jennifer over events with Anissa, just to round out his week.

At the police station, Tobias meets with Steven Conners, a gangster we’ve seen before. After some sparring about white people as saviors, they agree that they need to take out the mysterious powered woman who has been stealing from their operations. Obviously, this isn’t looking good for Anissa. Back at the Pierce house, Jennifer has another incident with her powers after almost messaging Khalil. Jefferson and Lynn compare notes on their bad days. Anissa comes in and wants to talk with Jefferson. She shares information from Gambi that the clinic she’s been fighting to save is about to be attacked. They plot with Gambi over how to defend the place, and who might be coming to attack it.

At the ASA morgue, Dr. Jace examines the poor pod kid she essentially killed. Lynn comes in and they argue, and we find out that Jace is smarter than is good for the main characters and is getting close to an important secret. Black Lightning and Thunder stand guard over the clinic and Gambi gives them a heads up the attack is coming. Black Lightning spots an important clue, and the heroes spring into action. Gambi tries to help, but is starting to show his age, plus is up against a really talented foe. Black Lightning and Thunder use their powers to save the clinic and everyone in it.

Jefferson goes through trial preparation with Miss Montez, and shows he is so not ready. At Gambi’s once again, Jefferson gets hit the negative side effects of the older man protecting him all those years ago. Jefferson goes home, and he and Lynn bring Jennifer down out of the first good mood we’ve seen her in for weeks. They have made a decision about her, and she’s very not happy about it. I can see both sides on that one, honestly.

Gambi has a final scene with Fowdy, and she gives him some, but not all, of the information he wanted. Tobias leaves the police station in triumph after his maneuverings have set him free. Jennifer has snuck out and goes to have a meeting that isn’t a good idea for anyone. Jefferson watches the news at home and he’s so upset his power is leaking out in new and different ways. The show ends with Tobias getting a welcome home party of sorts.

What I liked: Gambi is very dedicated to doing the right thing, even if it puts him at odds with his friend/foster son. I like that Jefferson and Anissa managed to put aside their differences to do the right thing for the clinic. I’m glad Anissa stood up for herself with Jefferson.

What I didn’t: Jefferson is having crap thrown at him from all sides. It’s amazing the man hasn’t broken down under the pressure yet. I feel really bad for him. Dr. Jace seems to be generic sociopathic scientist. Tobias is a smirking font of hate who so desperately needs to get taken down a peg or three. Jennifer is a really self-centered brat, even if she got dealt a bad blow this episode.

The Pierce clan is really due for a break. I’m giving this a 3 out of 5 and hoping things get better for them soon.