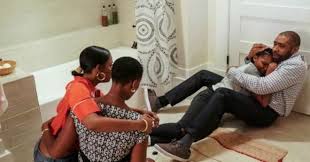 Family meeting… in the bathroom. Sure, why not?

Black Lightning really impressed me with its first season. Now they’re back, and they’ve returned with both the quality and the really long titles. The second season opens with “The Book of Consequences: Chapter One: Rise of the Green Light Babies.” Wasting no time, the show opens with another could-be-from-the-news scene of a kid on green light having a bad run-in with the police. The kid in the news story, Issa Williams, becomes a symbol for Reverend Holt and his congregation. For his part, the first section of the title looks bad for Jefferson as he meets with Dr. Napier Frank, a long-time friend and member of the board at Garfield High School. Following up on all the events of last season at the school, the board is expressing some doubts about Jefferson Pierce, Principal.

Lynn is having her own problems, being grilled by ASA Agent Percy O’Dell. He’s not going to be a close family friend, put it that way. They talk a lot about the pods with the Green Light kids in them, Lynn’s connection to them, and some of O’Dell’s personal dislikes. She doesn’t like what O’Dell tells her, and doesn’t take it lying down. Then again, there’s not a lot a research scientist can do against a shadowy government agency. There’s interesting news on the home front as Jennifer’s powers develop a new wrinkle.

In a parking garage, two women work out their differences. Kara Fowdy, former Vice Principal and ASA spotter agent gets ambushed by Tobias Whale’s righthand thug Syonide. It’s an impressive fight and they’re both very good at what they do. It ends with a great one liner and a literal twist on an old fashion phrase.

At the Pierce home, Jefferson and Lynn do what they seem to be best at: argue, especially about powers. She’s very worried about Jennifer and her new abilities, and not impressed with Jefferson’s offer to train their daughter. Lynn’s suggestion getting Jennifer a therapist doesn’t sit well with Jefferson, and he does raise some reasonable objections. They argue more, then talk about his problems at work, and then argue about her work instead. Can’t imagine why those two split up back when.

Gambi is at work in his tailor shop, staying out of trouble for once, when he gets unexpected company. Fowdy, in the aftermath of her garage fight, comes by. She knows a lot more than she should, and has an unusual proposition for the spy-turned-tailor. These two would be a very, very, dangerous team if they can get past the not trusting and maybe trying to kill each other.

Jefferson is arguing (he does that a lot) with Napier Frank, a long-time friend, fellow Olympian, and member of the board at Garfield High. Frank isn’t thrilled with Jefferson’s performance of late, and lets Jefferson know about some of the board’s concerns. They argue priorities, and it’s richly ironic that while Napier is bashing Jefferson, he’s also praising Black Lightning and Thunder. There’s a very important line about what Napier is trying to save, and what he isn’t.

Ben Crump preaches in Holt’s church, sharing some unpleasant news about how the government is treating their afflicted loved ones. He very carefully uses some words almost guaranteed to rile everyone up. Holt mentions the coming struggle, and that it’s going to be expensive. Jefferson and Anissa are there, listening and looking concerned. It’s a very realistic touch that sets up for something else down the road.

The Pierces’ leave and have some very heated words in reaction to the sermon or speech or whatever it was. Jefferson, oddly for a masked vigilante, favors letting the system take its course. Anissa doesn’t like this idea, and argues some hypotheticals to make him change his mind. Jefferson is also a lot more concerned with the lingering threat of Tobias Whale and his new protégé, Khalil. Jefferson’s focus is narrow and a bit disconcerting to hear.

Lynn and Jennifer argue about her powers and more importantly, her attitude about them. The argument goes badly, dredging up some painful moments from the season finale. That gets worse and it escalates past words, although I really do think that was by accident. They get a touching make up scene afterwards. They clearly care about each other, no matter how complicated everything else is getting.

Later on, Lynn and Jefferson argue more. She’s using more metaphors for having powers, and Jefferson rightly gets offended by the latest one. Their argument changes topics as Lynn tells Jefferson her future plans. I do get her points this time around, and Jefferson takes the exact wrong approach to try and make anything better. Neither of them are in a forgiving mood, and I have growing doubts about their future as a couple.

Elsewhere in Freedland, one of the cast takes matters into their own hands to address one of the problems mentioned earlier. While it was a good scene overall, I once again wince at someone trying to do something secret and illegal and not wearing gloves. With so many damn CSI shows out there, does anyone really not know about fingerprints by now? While this happens, Black Lightning has a surprising meeting with Acting Deputy Chief Henderson, who is far too perceptive for anyone’s own good.

The news covers more tragic developments with the Green Light plague, and Lynn comes back to talk more with Jefferson. At least this time they’re talking, not yelling. She is going to stick by her earlier plan, whether Jefferson approves or not. For his part, Jefferson sees a dark future ahead for the powered, at least in the Freedland area. He also tells Lynn about Henderson’s deductions, and she’s utterly shocked. Jefferson is worried about Henderson being in danger from what he now knows. Lynn suggests Jefferson consider a therapist, too, and makes another analogy about powers, although this one at least gets a laugh. Down the hall, we see what Anissa has been up to, which is equal measure good-hearted and amazingly stupid, especially with how she handles the aftermath.

Gambi brings Jefferson up to speed on his recent visitor, and Jefferson is stunned. He had no idea about Fowdy, and you can see how much this rattles him. When he finally moves past that, they talk about plans for the future and what they’re doing to track down Khalil. Speaking of, the young villain texts Jennifer, who decides not to forward the information to the police. Jennifer Pierce, at times, seem to be made of bad decisions. I get she’s a kid, but even so. She gets a shock when she finds out how her best friend Keisha feels about supers.

Reverend Holt’s sermon about consequences gets interrupted when a mysterious masked figure shows up. An alarming number of the congregation pulls weapons, but the newcomer shows their true intentions in an unmistakable way before slipping back out. There’s an even more disturbing development when something happens at the Blackbird Funeral Home involving Issa Williams, the kid we saw in the opening news story. There’s a lot of shock and the ASA agent on scene gets a different kind of surprise when he tries to take action.

Keisha and Jennifer see the viral video from the funeral home, and Keisha goes on a strange end of days rant that seemed to come from nowhere when she started it earlier in the episode. The stress gets to Jennifer, who starts to have an episode and locks herself in the bathroom, telling Keisha to go home. O’Dell and Lynn have another confrontation, and the man is smirking and annoying where Lynn is passionate and devoted.

At home, Jefferson goes to help Jennifer. It’s a very unique father/daughter moment with some great special effects and showing some interesting interplay of their powers. Later, Jefferson gets more bad news from Dr. Frank, and, parroting one of the doctor’s earlier lines, Jefferson makes a dramatic decision that’s going to affect the future of his family.

The show closes on a montage of scenes during a big thunderstorm. There’s some aftermath from the scene at the funeral home which is depressing. Lynn tries to work with the pods, figuring out how to help the kids in her charge. Fowdy tries to live up to her earlier promise to Gambi, and has a fight that, among other things, shows the IMDB page for this episode is wrong in how they list their credits.

What I liked: I missed the show and I’m glad they are back. The writing is as strong as last season so far, and they are doing a great job showing the consequences of what came before. There’s a lot of passion from most of the characters, although I grant some of it seems to be misdirected. Jefferson is a hero in or out of costume. While it’s going to complicate things, I’m glad they showed Henderson being as smart as he is.

What I didn’t: I really don’t like how Jefferson and Lynn tear at each other. They not only fight, they fight ugly. Jennifer really needs some better decision making. I don’t think Anissa’s new crusade is going to go well long term, and how she’s handling it is just stupid. Agent O’Dell seems more like a personification of uncaring bureaucracy than a character so far. The titles for these episodes are longer than some shows.

I’m glad the show is back, and they aren’t pulling any punches with the storylines. I’ll give this a 4 out of 5. Welcome back, Clan Pierce.

As a side note, the US government is currently taking the kids they very questionably snatched from their parents, and adopting them out. They took the kids from their families, and decided to do whatever they wanted. The story here is paralleling that nicely.