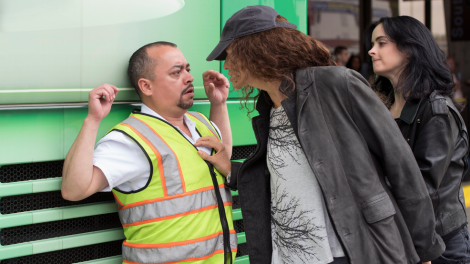 Now that she’s sort of got her mother back, Jessica needs to decide what to do with/about her in “Shark in the Bathtub, Monster in the Bed.” Her apartment is getting crowded. I wonder what Oscar would say about all this if he knew what was going on in there. I suspect a lot of this stuff isn’t on the lease.

Last episode ended with someone shooting at Jessica and her mom. This time, we see it was the ever-annoying Pryce Cheng, looking to avenge the death of his friend. Alisa reacts with her usual rage and bolts after him. Jessica tries to prevent her from adding another death to her tally, but it doesn’t go well. Cheng makes a run for it, but doesn’t get far. Jessica ends up in the odd position of having to protect Cheng from Alisa and not being able to go to the cops about any of this. The lady does live a complicated life.

After they argue about what to do with the would-be murderer, Alisa helps patch Jessica up and comments on them both being fast healers. They bicker about what to do next and Alisa shows a practical, if unusual, approach to wound care. They finally agree to go to bed, and Alisa has to talk Jessica through restraining her due to the night terrors.

Also bedded down for the night are Jeri and Inez, who are, at the moment, on much better terms than earlier in the series. They talk about Inez’s tattoos and possible travel plans. Jeri seems to be making an effort, but Inez isn’t buying it, for a lot of perfectly understandable reasons.

Jessica, looking weary, launches into another voiceover about keeping her mom and some odd sayings. Her ruminations get interrupted when Trish shows up. Trish is still buzzed from her inhaler high, and acting manic. Jessica tries to talk her down and things don’t go well, especially after Jessica figures out Trish is on something. Jessica wants to call Trish’s sponsor, but that line of talk gets interrupted when one of Jessica’s guests makes a noise in the other room. Trish assumes Jessica has a man over (which she kind of does) and Trish leaves. Before Jessica can chase her down, Alisa has an episode and Jessica has to deal with that. The poor woman is being pulled in way too many directions at once.

The next morning, Oscar notices Jessica has a broken window and goes to check on her. It’s a painful scene, since the man clearly cares for her and she’s at least interested in him, but has to keep too many secrets. Just in case things weren’t complicated enough, Oscar’s ex-wife Sonia comes storming down the hall, being a royal bitch. She ignores Oscar and Vido’s protests about Jessica being ok, and takes off again with Vido. Jessica tells Oscar to handle his family, she’ll handle hers, and they can talk later. That last is a big step for her, agreeing to talk to someone later and feeling strongly enough about them that she’s not just trying to get rid of them. Why do I get the feeling that Oscar is doomed?

Trish gets home and ignores a few texts from Jessica. Trish is a mess. She sees Griffin, her now-ex, and takes another hit from the inhaler to calm herself. But she can quit anytime, really. Jeri and Inez discuss fashion choices and are almost being a cute couple when Trish pops by and barges in, spewing questions. Jeri isn’t impressed and gets rid of her as quick as she can.

Alisa and Jessica check on Cheng, making sure he’s still alive. They share an unusual meal as Jessica makes sure there’s no fuss about Cheng being missing yet. Jessica lets herself wonder if she could actually manage to have her mother around and seems to like the idea. The conversation veers back to the fateful accident again, and Jessica reveals her guilt about it. Alisa is shocked and does her best to talk Jessica out of it. If nothing else, we (and Jessica herself) have learned a lot about her past this season. Eventually the talk jumps to Alisa’s opinions about how to deal with Cheng, which Jessica disagrees with strongly. Oscar calls with more bad news, and Jessica makes a decision that surprises both herself and Alisa.

Jeri picks up Shane the healer as he’s released from prison. At first, he wants nothing to do with her, but Jeri is persuasive, persistent, and ruthless. The healer explains to the lawyer what his talent takes out of him, and it’s a nasty cost. Shane eventually, reluctantly, agrees to go with her after getting some needed supplies.

Trish is back on the air with another puff piece, this one about gluten (Deadpool picked on that, too, in his recent movie). Trish is on a slow-but-speeding-up boil and finally loses it. She rants at her guest, berates her audience for not caring about, or acting on, important issues, and finally quits in a huff and storms out. I bet that clip goes viral, even if it’s audio only.

Jessica and Alisa meet up with Oscar and break into Sonia’s place to look for clues. Oscar notices some key stuff missing of Vido’s, Jessica finds out other things are gone, and Alisa shows some good common sense in her own search. Finally, they figure out Sonia has kidnapped Vido and taken off for the bus station. They get there just about too late, but Jessica and Alisa take some superhuman steps to prevent things from getting worse. Jessica even finds in her heart to show some compassion for Sonia. Jessica does care, no matter how she might deny or hide it.

Jeri finally get her session with Shane. There’s a lot of build up, and it’s really not clear, at least to me, what the result was. Trish is taking her frustrations out on a heavy bag when she gets a call with a very unexpected offer. She’s elated at first, and then makes a discovery I’ve been waiting for. I suspect she’s going to be a mess next episode, more than she is now.

Jessica, Alisa, Oscar, and Vido return home. Oscar is immensely grateful and makes an offer to Jessica. He also noticed some things during the rescue, and seems willing to keep her secrets. Jessica is verging on being actually happy with a life, so we know something bad is coming, especially since there are several episodes left to go.

Jessica and Alisa get in and argue more about the past. Jessica even offers some forgiveness for some of what’s happened. She’s making some real strides this season. Cheng finally wakes up and he and Jessica have a talk. They debate what to do, and Cheng actually makes some very good points and, from some angles, was trying to do a good thing. Finally not able to fool herself any more, Jessica comes to a very hard decision and makes a phone call. The episode ends on a tragic note for the Jones family.

What I liked: Even in the midst of all this chaos, Jessica is showing signs of growth and change, which is important for a character. I like the ways she’s changing, and it’s in believable steps. Having so much happen at once and not being able to cover it all at once is something we can all relate to. Jeri’s desperation and ruthlessness are wholly in character and I think a lot of us would do the same with our backs to the wall like hers is. Malcolm needing a break after last time makes perfect sense. Cheng made a good case for himself and what he did. I do like how the Oscar/Vido part of things was handled.

What I didn’t: Does Jessica need more tragedy? The woman can’t catch a break. I’m wondering what gods she offended in a past life. I’m not enjoying Trish’s subplot or watching her fall apart. I was hoping she’d become some version of her comic book self this season, but I think the costume and claws are a long way off for her right now, if they ever come at all.

While it’s dark and sad, it’s a well done series. I’m giving this one a 4 out of 5. I almost dread to see what’s coming next for Jessica and Trish.