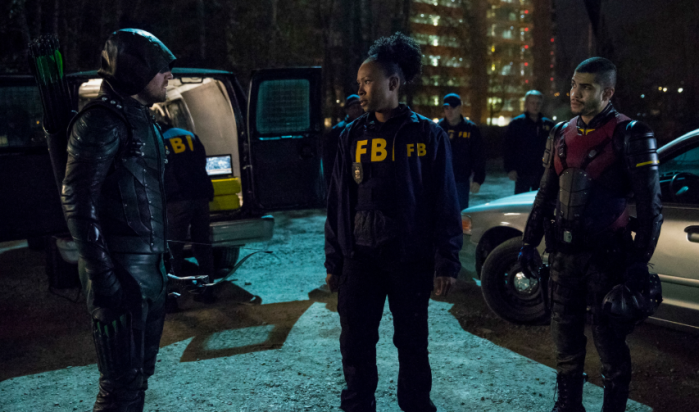 The team up you didn’t see coming…mostly because it makes no sense.

The CW’s Arrow ends its sixth season with a “Life Sentence.” Since this is a season finale that aired a few weeks ago as I write this, there will be spoilers. If you haven’t seen it, you might not want to read this until you do. So don’t say you weren’t warned.

It’s been a weird, not really great season, and the finale is equally unsatisfying in my opinion. I actually think most of the CW-verse lost something this past season, with the exceptions of Legends of Tomorrow, which continues to be goofy fun, and Black Lightning, which was just amazing (and so far not part of the “Arrowverse”). But, at least a few things get a wrap up here.

The episode starts with Green Arrow attacking the SCPD. One of the cops smirks that he was foolish to come alone. In answer, all of Team Arrow plus an FBI Tactical team storm the building. I guess they’re just assuming any cops left are bad ones? After a big fight scene, the bad cops are defeated but, of course, there’s no Daiz. Because he always manages to ooze away.

I guess as part of his deal, Oliver has given up on the whole secret identity issue, as he’s wandering around in costume without his mask. FBI Agent Watson, who has been hunting and hounding Oliver most of this season, wants to know how Diaz knew they were coming. As I recall, that issue never gets cleared up. Anatoly has a coded conversation with Oliver, as Diaz is in the back seat listening in to the call. Diaz gives Anatoli a card with a place for them to meet later and Batmans out of the back seat.

Diggle and Oliver have a talk back at the Lair, with apologies and a gift from Oliver. Diggle declines it for now, but Oliver won’t take it back. They shake hands and seemingly make up their differences, which makes Felicity happy. That lasts a few seconds until Anatoly strolls in (he knows where this is, too?) to turn himself in and bring word about Diaz. The crime boss is on the run and mobile most days. He’s also bringing in a group of assassins that even the League fears, called the Longbow Hunters. They supposedly died off in the 50’s, but are still around… and never show up in the episode aside from a brief cameo. The Longbow Hunters was the name of a classic Green Arrow story in the comics back in the late 80’s.

Mayor Lance signs an official act asking for FBI assistance, since they don’t usually do local law enforcement. Then again, there’s an interstate aspect to Diaz’s “empire” so the FBI would have had jurisdiction anyway. Diaz calls Lance, raging and threatening, telling him to get the FBI out of the city. Agent Watson asks about the call, Quentin lies, and tells her to come down on Diaz as hard as she can.

Diaz himself taunts Laurel, who still has the power damper clamped around her neck. He mocks her for coming after him because of her “Daddy.” With Felicity as Overwatch again, the team and FBI move out to the location Anatoly gave them. This ends up being a trap that snares some of the FBI team and Wild Dog. Honestly, the way Wild Dog Rene has been acting most of this season, I’d be ok with him getting blown up. Rene makes a quick call to Zoe to tell her he loves her and sorta say good bye just in case. Who is taking care of Zoe during Rene’s nightly excursions, we never have learned with this exception. Naturally, Felicity figures out a way to defuse the bombs and Rene even heroically rescues an agent who froze up.

Apparently having taken it for their combined base, the team and agents go back to the SCPD. .Oliver checks in on Rene and they make up their differences with a handshake. Seems to be Oliver’s move this episode. Quentin comes and tells them all about the threat to Laurel, and the team starts a plan to try and save the murderous villain because she happens to look like someone they used to love. Or that’s my opinion anyway. Quentin and Oliver argue about how best to proceed, and end it with some compliments, a reminder about Quentin’s pacemaker, and another Oliver handshake.

Quentin goes to meet Diaz and the plan goes off script almost immediately. Watson is annoyed by the difference in priorities (saving Laurel versus taking down Diaz). Watson fumes about filing charges against Quentin, and Oliver and Felicity, between them, come up with a way to track Quentin anyway. The mayor himself gets tossed in a cell with Laurel, so at least they’re in the same place.

Felicity, of course, manages to trace Quentin. Oliver goes to brief Black Siren, thanks her for putting aside her vendetta, and turns it into another handshake moment. By this point, it’s clear that something is going on with Oliver. Felicity is suspicious, but Oliver evades her questions. She calls it Oliver’s “farewell tour” and I’d agree.

Diaz stops by the cell and threatens Laurel and Quentin more to try and get the mayor to kick the FBI out of the city. It doesn’t work like that, Diaz. It devolves to actual gunplay, and Quentin quite literally takes a bullet for Laurel. This is when the explosions start as the Arrow/FBI task force rolls in. There’s a lot of fighting, and Black Canary makes a surprising move about Black Siren. Canary gets a lot of great fight time in this scene as they cooperate to try and evacuate Quentin.

Diaz flees to the roof and finds out his helicopter is too far out to get there in time. He and Oliver get into a nasty fight. Laurel, having gotten Quentin to medics, shows up and does something really stupid, enraging Oliver and a few fans. Diaz manages to get away, but Oliver, thanks to a new toy from Felicity, finally gets the damn drive that was so important last episode cloned. Ominously, Watson glowers and says this doesn’t change our deal.

Before Quentin goes in for surgery, he and Rene have a heart to heart, and Quentin makes an amusing request. Oliver comes in and tells him Diaz got away, but doesn’t blame Laurel, which was nice of him. Quentin worried about what Oliver gave up to make this deal, and Oliver talks about him as a father figure. Quentin thanks Oliver for everything.

Black Siren is pacing waiting for word when Sara shows up. Somehow, the villain from another Earth knows how to reach the Waverider. How, we never know. They have some awkward conversation while they wait. Even in the midst of Quentin’s surgery, Watson can’t pretend she has a heart, and we find out part two of the deal. They arrest Oliver as everyone else protests and Sara looks really, really lost. Oliver claims this was the only way, and asks them to take care of each other. In the midst of this, Dr. Schwartz comes out with the word that Quentin didn’t make it through surgery.

They march Oliver out the front door and the press descends on them. Oliver admits to being Green Arrow and is taken off to a supermax prison, apparently skipping the whole trial part. Felicity wanted to break him out, and he asked her not to. Oliver makes a very stirring appeal to the crowd and whoever is watching about protecting the city and his team completing his mission. Diggle looks at his earlier gift… his own Green Arrow suit. Oliver gets slammed into a cell. Diaz, of course, has survived and glares at the tv as Oliver speaks.

So… let’s look at this. The FBI made a deal with Oliver to take down Diaz and then arrest Oliver. That makes no sense at all. It’s not a double jeopardy issue, as people can be tried at the state and federal level both. But the FBI isn’t going to work WITH someone to do what they want to arrest him for. The few times that’s happened, it’s been a big scandal and FBI agents went to jail (see the book and movie Black Mass for example). This season has been erratic and disappointing and this finale was more of that. Anyway….

What I liked: Not a lot. Oliver making peace with everyone was good. Sara showing up was an unexpected cameo but made perfect sense. I’m glad they got the list to take down all Diaz’s group.

What I didn’t: So much. The deal with the FBI makes no sense. Diaz gets away AGAIN. The heroes just never get a clear victory this whole damn season. I don’t see how the team will keep going with no base of operations, Oliver gone, Diggle as the new arrow who can’t shoot a bow, and law enforcement knowing all their ID’s. I knew something was coming since Paul Blackthorne had announced his departure but I still hated to see Quentin go like that. He died for his delusion about Laurel. Not only do we never learn why Curtis wasn’t subpoenaed (or how he recovered so fast from his knife wound last time), he got left off Oliver’s little round of goodbyes. Watson was an obsessive, heartless annoyance I hope is gone. And Star City needs another new mayor.

Trivia: A Green Arrow movie has been rumored for years and never got off the ground. The name? Supermax. Where Oliver ended up.

Ugh. Ok. It’s over. I liked neither the finale nor the season. I’m giving this a low 3 out of 5. Arrow arguably started the current boom of comic book shows. I hope it manages to get better, or it may well lead the way back out, too.