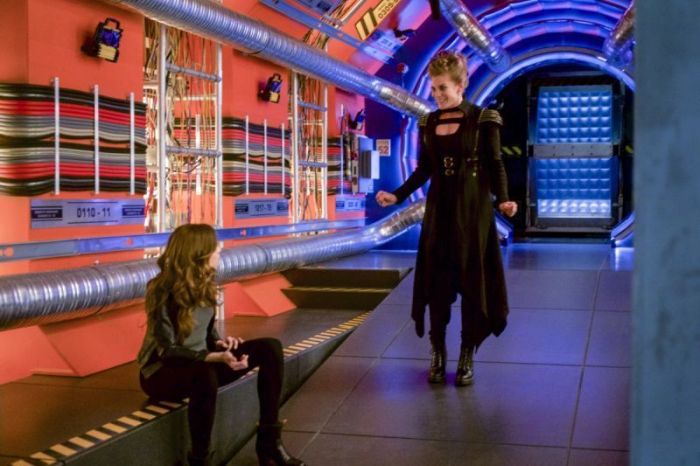 Caitlin, dear, I get you’re upset, but is THIS who you want to be taking advice from?

Flash and company continue to flail around and find a way to do something, anything, to stop, or even slow down, DeVoe. “Harry and Harrisons” starts with Barry waking up in bed alone. Iris is downstairs poring over all their material on DeVoe, and she has decided to post a big article on him. The issues they debate about that to one side, I wonder something about this: she hasn’t been working as a reporter in months, and there’s been no mention of her former Flash blog. When you don’t post new content, you lose followers. How is this supposed to reach all the people she’s hoping it will?

Caitlin, Cisco, and Wells pulled their own all-nighter, monitoring Thinker’s satellites. They’re very understandably worried about the plan they’ve pieced together, and haven’t noted any of his pocket dimension energy in days, so they don’t have a great way to track him. With Null’s stolen power, Thinker can launch from anywhere by just negating gravity for the devices. In between obsessing over his fading intelligence, Harry wonders why Thinker seems to be lying low. Wells pulls Cisco aside and asks for help, both from him and the comical Council of Wells. Let’s just say it doesn’t go as expected.

Joe is trying to study up on ways to counter Thinker’s satellites, and isn’t getting that far. Caitlin is trying something new and different for her Frost problem, and we get another one of those “Someone makes a comment that changes how the problem is being addressed” moments that happen so often on the CW shows. Caitlin reflects for a bit and decides what they need is a really off the wall approach: go to Amunet for help. No one is happy with this idea. To that end, Flash zips Caitlin to one of Amunet’s strongholds. They find Norvak, the eye-worm guy, and a lot of thugs, but they learn Amunet’s been missing for months.

They mull over this latest setback, although Amunet laying low for while makes sense. They also dig up her history, who she was before the infamous particle accelerator explosion. I’d like to point out they’ve already established not all supers stem from that night, and they both need to not assume that’s the case anymore and look in to why that is. They seem to have forgotten that bit. Barry and Iris debate her plans, and Wells and Cisco take a new approach to their most recent challenge.

Joe and Caitlin continue to be an unlikely set of partners as they check out some of Amunet’s old haunts. Joe cautions Caitlin about her motives in this project, and urges her to not keep secrets from the team. They find Amunet working in a very different capacity, and call for help. Flash arrives and manages to persuade her they aren’t looking for a fight this time. In a really questionable move, they bring Amunet back to STAR, and she reveals she knows a piece of Barry’s secret. Finally, she agrees DeVoe’s plan would be bad for business, and grudgingly offers her help. Caitlin and Amunet have a private chat where Caitlin reveals some of her motives, and makes another iffy deal.

Wells meets with a different group and gets some cryptic answers that annoy him more than help him. Flash, Caitlin, and Amunet arrive at her stash of special shards she needs, and Flash uses his Barry skills to help figure out the theft. Amunet warned them about. Barry develops a suspect from the evidence and Amunet is furious. They retreat to STAR, and Joe prods Caitlin about telling the others what she’s up to.

Wells is sulking and giving up, clearing away his work station and surprising Cisco with a genuine apology. Wells gets sidetracked with a new train of thought that might give him some insight. Iris has finished her work and shows Barry. She draws an analogy about keeping it secret I don’t remotely agree with, and Barry agrees with her finally. I really have my doubts about this, in addition to the practical issue I mentioned above.

Amunet goes to find Caitiln, and gives her some surprising news. Norvak works on his own plan, which isn’t going to help anyone in the group. Amunet and Caitlin argue about what Amunet agreed to before she leads them to where she thinks Norvak is. Amunet and Flash argue over what to do with Norvak long enough for Flash to get taken down by a facet of Norvak’s power I don’t think we’ve seen before. Caitlin and Joe get pinned down by the thugs Flash didn’t take down while Iris gives Flash some advice that I don’t think should have worked at all, but it did. I really question that one. Caitlin finally does something useful with the cold gun to get her and Joe out of their jam. Amunet comes to a sort of compromise with the others, giving them something to help with DeVoe, and takes off. I get being selfish, but she’s being stupid, knowing what’s at stake.

All the good guys get back to STAR, with Cisco throwing in another movie joke about one of their souvenirs. He can’t use his powers in space, so they can’t go after the satellites that way. Wells, armed with his new insight that’s remarkably convenient, gives the team a theory to work with about why DeVoe hasn’t finished his plan yet. Iris follows up on this with a new search (isn’t Cisco better with computers than she is?) before she and Barry have a talk about her new idea and Joe and Caitlin have a different chat about her problems. The episode ends with Iris’ new scheme getting some improbable results.

What I liked: Katie Sackhoff is always wonderfully, twistedly entertaining as Amunet Black. She can stop by anytime. Cisco’s idea about how to help Wells was a good one. I like and understand that Caitlin is so determined to get Killer Frost back. Norvak’s scheme was self-serving, but made sense.

The episode was a bit uneven to me. I’ll give it a 3 out of 5. I’m really looking forward to the end of the DeVoe storyline. That villain has overstayed his welcome.