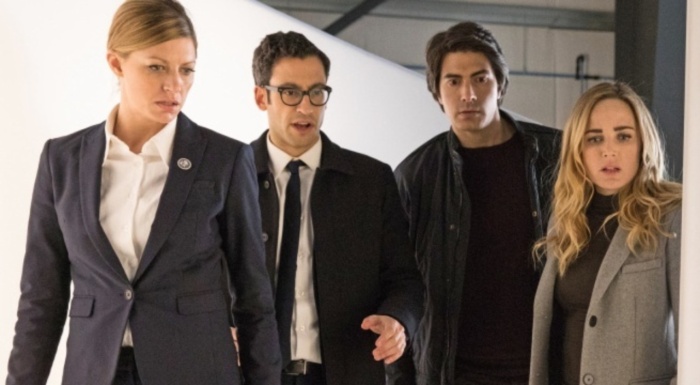 This week’s Legends of Tomorrow goes for a classic sci fi novel for their title parody. “I, Ava” is, I suspect, a nod to Isaac Asimov’s I, Robot. We do finally learn some of the secret behind Ava Sharpe, now Director of the Time Bureau, that Rip Hunter hinted about. It comes as a surprise to everyone.

Aboard the Waverider, Sara announces she’s taking a much needed break. Between demonic possession and romantic hardships (even if they’re her own dumb decision), I can understand why she’d want to chill for a bit. She names a stand-in captain, surprising her choice and disappointing someone else. Down in the lab, Zari is trying to focus on her video games (her default setting when not fighting for her life) while Mick is playing with his new powers. He finds some uses for them that are totally in character for him. Zari ends up assigned to train Mick by the new captain, and then Nate interrupts everything, calling everyone to the bridge.

Nate and Wally have found a new problem spinning out from recent events. With Amaya having lost her totem, her granddaughter, the Vixen of our present, is now a non-powered vigilante, but apparently not as well trained as a certain archer and his crew. Amaya wants to go talk to her, which would cause all sorts of problems, and Nate and Wally eventually persuade her to let them go instead.

Ray and Sara argue over whether it was the “real” her that tried to kill them all the other day when they get interrupted by Gary suddenly portaling in. Neither Gary nor Ray knew Sara and Ava had broken up, and Gary seems devastated by it. Ava has been missing a few days, and he’s running out of ways to cover for her. Sara says they’ll help, evidently abandoning her break idea.

In the modern day Detroit, Wally and Nate go see Mari’s father. Mari’s in the hospital after getting injured in her heroic career. For some reason or other, they go well out of their way to never show the character. I don’t know if the actress was booked elsewhere, or something else was going on. Dad isn’t happy about Mari’s heroism getting her hurt, and the boys, posing as reporters, sympathize. Nate sees Kuasa stalking around and goes to chase her.

Back at the Time Bureau, a very nervous Gary sneaks Sara and Ray into Ava’s office, looking for clues. They find that Ava’s file has been deleted, from the Waverider of all places. Gary is sure she didn’t do that, and Sara, snooping in the trash, finds a birthday card from Ava’s parents. In Detroit, Nate and Wally chase Kuasa down, and Wally uses his speed to defeat her. She then tells them why she’s there, surprising everyone.

Gary, Sara, and Ray go to Ava’s parents’ place. Sara babbles about meeting Ava’s parents. Once they get inside, the suburban normalcy of the parents doesn’t quite stand up to scrutiny. After some discussion, and a bit of “persuasion” from Sara, they tell their story, and it’s not one anyone saw coming. Back on the ship, Zari and Mick suffer poor communication over both Totem training and religious observances.

The trio returned to the Time Bureau, and run into Ava herself. Her account of her whereabouts doesn’t really make sense, or jibe with what the team has learned so far. Sara glares after her as Ava blows them off. Ray makes a joke about running into your ex, and Sara shows she managed a slick move. Kuasa brings Wally and Nate to Mari’s “Vixen cave,” where they compare notes. Nate comes up with an interesting idea that could give everyone what they want.

Wally, Nate, and Kuasa brainstorm on their plan. Nate rules a few things out, and Kuasa comes up with a new idea. Amaya calls in the midst of this and Nate does his best to stall her. They all agree to not involve her for various reasons, and Nate sends Wally off to keep her distracted.

Team Vancouver make more startling discoveries, which leave Sara surprised and doubting her past relationship with Ava. After a lot more weird comments from Gary (that man needs therapy and a vacation, and probably a girlfriend), Sara ends up in a weird fight. Ray wisely cautions Gary to stay out of it.

Kuasa and Nate put their plan into motion, and summon the Darhks for the next part of it. Damian is in his more entertaining mode as he snarks about vigilantes and their dark spaces. The plan works to start with, but there’s a should-have-been expected betrayal, and things are looking bad for a Legend. Even with this, it would give someone what they want.

Sara triumphs in her fight, and they tie her foe up. Further confusing everyone, Ava picks this moment to arrive. Ava slowly takes in her surroundings and does something utterly unexpected. Ray makes a joke that’s a reference to Orphan Black. It does appear that one of the people they suspected of being part of whatever this is, isn’t.

Back in Detroit, things are going badly for Nate. Damian does love his work, you have to give the man that. Things get a bit weird, and then steadily weirder, as Damian and Nate end up sort of bonding over… well, it’s really hard and spoiler-y to explain. But it’s a damn funny scene. Again, Damian is often one of my favorites to watch when he gets in the groove.

Ava recovers from her earlier shock, and leaves Sara very confused. Things start moving around this group, and everyone is both confused and desperate. Zari and Mick spar over training methods. I really think this was a poor choice for student and teacher. This is about when Wally comes in, and asks what’s going on. A not-terribly concerned Amaya says Zari is either training, or killing, Mick. Kuasa shows up with an unexpected present for Amaya, although how Kuasa got aboard the Waverider is really unclear. They learn from her part of what’s going on with Nate, and Amaya tears into Kuasa.

Ava makes a startling confession about where she was, and we get another reference to Upswipz the company Ray briefly worked for. I do love that they keep bringing things back as little nods to their own history. As Ava worries that the others are having problems with what she told them, she finds out there’s another problem which isn’t about her, although it sort of is. All of this kind of smacks Ava in the face with some truths about herself, but they end up using that to their own advantage.

Nate and Damian continue their weirdness, and end up pissing off Nora and/or her “passenger.” Just as things are looking bad for Nate, or worse at any rate, Kid-Flash and Amaya arrive in the nick of time for a big fight. Mollus-powered Nora can do some unexpected things to even someone as powerful as Kid-Flash, which was unexpected. Amaya gets a nasty surprise about something she was looking forward to.

Ava’s bluff fails, and she and Sara go into an amazing back to fight fight. Those two are hell on wheels. Ray helps a bit, while Gary mostly is comic relief. Once again, where is Ray’s suit when he needs it? We don’t know, that never comes up. The man really needs to plan better. He’s allegedly a genius after all.

The fight with Nora is going badly for the heroes, until they get some unexpected help. The heroes manage to squeak through, but it requires a sacrifice that I didn’t see coming that’s going to change the balance of power on a few levels. Kid-Flash helps them make a speedy escape. Mick and Zari learn some troubling news at the same time and it ends their fight. As the others return, Ray pulls Gary aside to ensure his silence.

In the library on the ship, Amaya and Nate take turns blaming themselves for the earlier loss. Amaya is really shaken by what happens, and ruminates on her earlier choices. She bemoans fate, and makes the kind of statement that can hurt people around them, tempt fate, and usually be just talking. Not where the Legends are concerned, though. Zari and Mick have a sort of bonding moment. Sara and Ava talk about where to go next, and figure out who is behind at least part of this weirdness. Amaya, meanwhile, comes to a desperate decision and does something rash to end the episode.

What I liked: Damian Darhk is damned entertaining. His and Nate’s scene was amazing. The bits in future Vancouver were a lot of fun. Gary is a screwed up bit of comic relief. I’m hoping this episode resolves Ava and Sara’s split and a lingering plotline around Amaya.

What I didn’t: As usual, where’s Ray’s suit? I’m not sure I buy what Nora did to Kid-Flash. Where’s Constantine? Didn’t he join up last time? The Zari/Mick scenes felt almost like filler to pad out the episode. More secrets from the team’s founder? Enough already. There’s a lot of mystery they start on here that never gets mentioned again, let alone wrapped up.

It was a fun episode, if it had a few flaws. I’ll go 3.5 out of 5. It’ll be interesting to see what comes of the last scene.