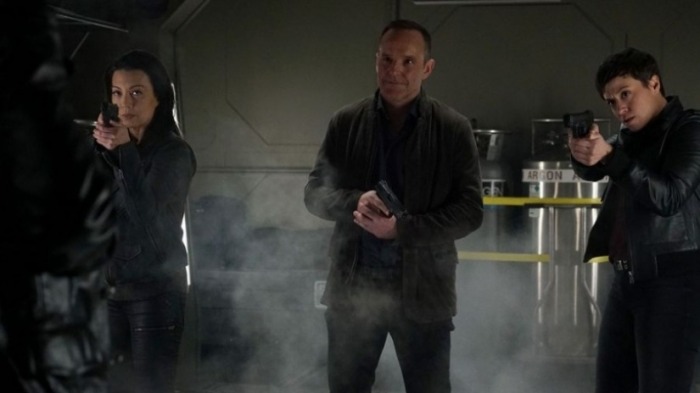 NOT the team I want coming after me.

Like anyone in an ongoing adventure series, the Agents of SHIELD have been through a lot. The sort of emotional and moral fatigue they suffer from can take its toll on even the best of them. We see some of this kicking in as “Devil Complex” shows us the latest developments for the outlawed special agents.

We finally see one of the anomalies form, and it’s a neat effect. The new fear-monster attacks the lab, breaking up Fitz and Simmons working on projects and complaining about the lack of their preferred British junk food. They’d actually moved on to wishes before the strange astronaut attacks, with one of the newer agents stepping in to save the day.

Mack and Yo-Yo are testing out he ‘bot arms they stole from one of Hale’s “super-mechs.” It’s clearly a painful process for the Inhuman, and Mack is very concerned. Mack and Fitz are drawing up plans for a prototype of something new for her, while Yo-Yo expresses her frustration at not helping, and making a few suggestions.

Fitz is trying to figure out how to use the gravitonium they got last episode, and has hit a wall. Deke isn’t able to help; it would be like asking most people to fix a car. The vast majority of drivers can use a car but have no idea how to repair or modify it. The device Fitz used on the Rift that’s causing all these fear monsters isn’t going to last. He sends Daisy on a digital scavenger hunt, searching for the original notes of Dr. Franklin Hall, the man who created the stuff, and went on to become the villain Graviton in the comics. Deke babbles to Daisy about his worry concerning the tension with Fitz and Simmons. Deke has a special reason for wanting them to have a happy marriage, although he hasn’t shared his insight with anyone yet.

The team scrambles to go after General Hale when they finally get a lead on her cell phone. The General’s drive along the highway gets rudely interrupted by a very clever use of some of SHIELD’s better toys. Points for that one. The agents toss gas grenades into the SUV and Coulson jokes about this being the first part of Piper’s redemption tour, after she turned on them during their absence in the future. Deke goes to report the capture to Fitz, and gets a nasty surprise.

Aboard the Zephyr, Hale is in the interrogation room that was such a big part of early seasons that we really haven’t seen much of in a while. She and Coulson argue semantics over their conflict. Hale does actually look disturbed when Yo-Yo’s maiming comes up. She also essentially admits that the truth about General Talbot being shot doesn’t matter as long as she controls the story. Hale hints at a major disaster looming in the near future.

Fitz pushes, literally and figuratively, Daisy at her computer station. She isn’t making any progress seeking Hall’s notes. Fitz is looking ragged and exhausted, and Daisy is worred about him. Cameras go out on some of the lower levels, and Daisy goes to check while Fitz gets more and more frustrated with himself and then gets a very unwelcome and surprising visitation.

Mack and Simmons are moving Yo-Yo to a safer room, which she isn’t thrilled about. They get interrupted by another of the super-mechs arriving. Fitz argues with his evil counterpart, and is clearly confused. Fitz leaves his evil self when he hears Simmons yelling.

Coulson and Hale continue their discussion, neither willing to concede much to the other. Hale makes Coulson an unexpected offer. Piper finds May and reports something weird with Hale’s driver. May figures it out, and tells Creel, the Absorbing Man, to get out of the SUV. Creel is clearly on Hale’s side, and has a persuasive argument for them listening to her. A quinjet docks with the Zephyr and adds another element to the confusion: the upgraded Ivanov who we haven’t seen since the bad old days of Ada.

While Fitz tells the others about his doppleganger, Ivanov argues with Coulson. Ivanov likes his new form, and delivers an ultimatum to the SHIELD agents. For someone who believes in Hale’s cause so strongly, he seems very ready to let the General die.

Fitz freaks out about his evil self, and blames himself for not getting the Rift shutdown earlier. When he keeps going on, Simmons asks why the evil Fitz would necessarily be Fitz’s greatest fear, which is a great point. Simmons pushes Fitz to think like his darker half and figure out what he’s doing. This realization comes too late for one of them, as Daisy gets captured by yet another of these damn super-mechs. They’re like cockroaches.

Hale continues spinning her stories to make SHIELD look bad, and repeats her offer to Coulson. May is pissed when Coulson makes a bargain with her. The agents agree it’s a trap, but Coulson is going to go anyway, and an irked May washes her hands of him. I can kind of see both of their points of view here, and, let’s face it, Coulson has a lot less to lose at this point than anyone else.

Daisy wakes up on an exam table, with several nightmares coming true at once. Evil Fitz calmly informs her what his plan is, and it terrifies her more than most anything we’ve seen so far. He keeps justifying his work as he inflicts severe pain on Daisy. Coulson wonders who is actually in charge between Hale and Ivanov, and they take off as this discussion goes on.

Evil Fitz keeps working on Daisy, ignoring her pleas. Fitz shows up and also argues, although he’s being really ineffective against his evil self. Yo-Yo and Mack have a very fatalistic talk about her future, and both Yo-Yo and Simmons tell Mack to rest after being injured earlier. He’s not too good at that.

Evil Fitz lays out his plan, and there’s some degree of method to his madness. Evil Fitz mocks the good one for being weak as the procedure on Daisy continues. We get a surprising, tragic reveal about what’s actually happening, and I admit, I didn’t see it coming. Simmons and Deke get the bad news as they are brought in by the super-mech. Evil Fitz’s plan is carried out, and it does what he said it would. It’s a good outcome from some very bad means. Simmons and Fitz have a very sad conversation in the aftermath of all this. Simmons then gets another shock as Deke tells her who he really is, and we get a hint that Deke’s future is coming true, which is both good and bad in this case. The episode ends with us seeing who Hale is really working for, and it’s another ugly surprise connected to something I had thought they got rid of.

What I liked: The agents all clearly care for each other. That comes across in almost every scene. They are a family now, with all the good and bad that comes with that. I didn’t see the several secrets about Evil Fitz coming, but they all made sense and were well done. I’m hoping these developments don’t delay Yo-Yo’s rehab, but I think they will. I’m glad Deke finally told someone about his origins.

What I didn’t: I really didn’t need to see Ivanov again. The reveal of Hale’s allegiance made me roll my eyes and think, “Again? Really?” If they come out on top, SHIELD needs to do whatever the equivalent of chopping off the head, staking the heart, burning the body, and salting the earth is. Enough is enough.

There were some really big surprises here. I’m going to up this one to a 4 out of 5, even with the elements I didn’t like.