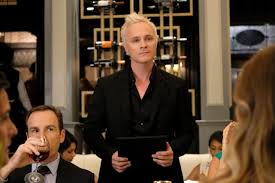 Hello, my name is Blaine, and I’ll be smugly annoying tonight.

I had my doubts when iZombie debuted a while back. This was another time I was very happy to be wrong. It’s a really entertaining show that changes their status quo that combines a different spin on zombies, a detective murder of the week, a close group of friends, and some really clever humor. The show takes breaks that seem to be random as far as both how long they last and when they come. They are back now, after Legends of Tomorrow, and in their last episode, everything changed. Zombies are publicly known, they’ve taken over downtown Seattle, and infected a large portion of the population. Fillmore-Graves, the zombie mercenary company with the punny name, is in charge to the extent that anyone is, and our band of characters has to find a way to fit in to the new reality.

The episode opens in a huge factory that appears to be a manufacturing plant for the brain-paste Fillmore created to feed their zombie troops. One of them is both a rabid Seattle Seahawks fan and not very happy about working for zombies. When their conversation goes a little loud, a supervisor from Fillmore makes some very ominous comments about production quotas. All the football talk gives us our title, “Are You Ready For Some Zombies?”

Examining the wall that has separated downtown Zombie-land from the rest of the world, Chase Graves is having a chat with Blaine. Blaine is providing information to Chase in exchange for being allowed to keep his businesses open. Needless to say, Blaine isn’t happy with this arrangement, but he doesn’t have any choices. Blaine is surprised when he sees the deterrent that Chase is setting up for any zombie that disobeys his edicts.

The loudmouth on the assembly line, to no surprise, is the murder victim of the week, Clint Hicks. He stayed late for overtime to work on cleaning the big vat that grinds up the brains for processing. His wife called in when he never came home. This one is messy enough that even Ravi looks a little unsettled. Hicks lost his dream job working for the Seahawks after the zombies took over. We also get to see that people are being fearfully PC about all things zombie in this new world, and then Liv goes back to the office to make brain buffalo wings (zombies gain visions when they eat someone’s brain in this world, if you haven’t been watching the show. Although if you haven’t, this is an odd place to start).

Major is out on patrol with some Fillmore troops when we see there’s a resistance group called Dead Enders who aren’t exactly committed to peaceful protest. Chase debriefs Major afterward, and gives Major a new assignment drawing on his background working with kids. The zombie infection Chase engineered wasn’t exactly selective, and Chase doesn’t want zombie gangs adding to his problems. As we learn more about the complications in the city, it really seems like Fillmore didn’t plan this out too well.

Liv, channeling Clint’s personality, has gone into rabid fan and virulently anti-zombie mode. She and Clive go visit Clint’s widow, Kelly, and son, Zorn. There’s an odd atmosphere in the house, and clearly there is more going in with the family than it seems at first glance. The lead they get is a “war” with a coworker.

The coworker is also a football fan, but for a rival team, and they had an ongoing argument that started with football and spread. I admit, I’ve never been a football fan, but from what I’ve seen from the outside, this kind of rivalry gone nuts seems plausible, if a (tiny) bit exaggerated. They catch him in a lie, and his explanation is one of those that seems weird enough that it kinda has to be true. Clive and Liv then report to Dale Bazzio, Clive’s former girlfriend who was tragically infected at the end of the last episode and season. Things aren’t looking great for their relationship. We also see that Ravi, while working on another case, is having some serious side effects from his vaccine he developed last season.

He and Liv talk about that, and she gets a vision about what some of Fillmore’s guys are up to. While this is going on, Major has his first session with a group of infected kids. It doesn’t go smoothly, and there’s a lot of tragedy in their stories. Fillmore, as occupiers, are very much in a privileged position that the kids envy.

Liv and Clive go to Major with a sketch of who she saw in her vision, and he reluctantly identifies the man. They get pointed to a man with the unfortunate name of Russ Roach who frequents Blaine’s club, The Scratching Post. We also see Ravi suffering from his own weird side effects from something he’s been through.

Liv and Clive have a less than successful interview with Roach. He’s not cooperative, and then Blaine backs him up, showing how little power and influence what remains of the Seattle police have in Zombie City. There’s also some tension between Blaine and his hulking bodyguard. Considering how often Blaine has been betrayed, you’d think he’d be both more careful and smarter about that kind of thing. The bodyguard then does something amazingly stupid in the interests of greed and petty vengeance, which doesn’t work out for him and is going to cause a LOT of complications for everyone.

We finally get to see Payton, one of the few cast members we haven’t seen, out at dinner. Even the menu is different in this strange new world. After an encounter with Blaine, who seems to own this place like almost everywhere else, Payton goes home to find a lot of complications for the end of her date. Their place has been marked on the door as the home of a zombie, which gives Liv an idea about what happened to Hicks. She also gives Payton some very unwanted advice on her way out. What she and Clive find is a family tragedy with zombie infection standing in for what could be any of several social issues.

Major works with his kids, and then finds out what Chase is really up to. Chase is ruthless, but he’s damn clever. It’s going to mean a change for some of the kids and for Major. The show ends with the complication the bodyguard set in motion earlier causing all sorts of problems for Chase’s hopes of a peaceful Zombie City.

What I liked: Well, first off, I’m just glad the show is back. I really do enjoy this one, and the long breaks make me forget how much. The new developments with Ravi are a surprise and should make things even more complicated. I salute the show for changing their entire world last season going in to this one. They set a lot of things in motion here while also wrapping up their mystery of the week.

What I didn’t: While no one (certainly no one I’ve ever dated) would call me a romantic, I keep hoping Ravi and Payton will get back together. They worked well as a couple. It really seems like Fillmore should have planned their takeover a bit better.