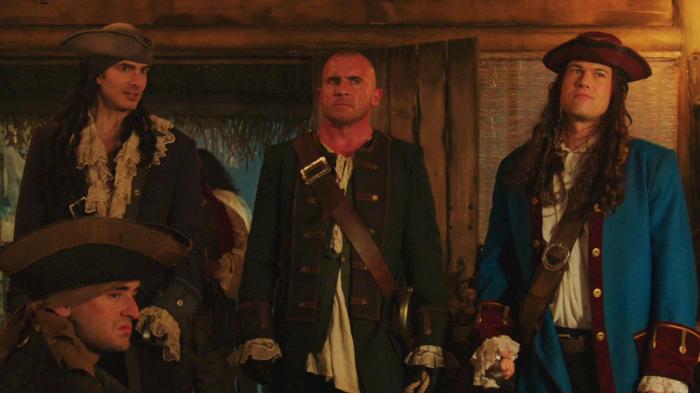 It’s the pirates’ life for them…

DC’s Legends of Tomorrow has been working more towards being an action comedy than the other shows, and they’re doing a good job of it. “The Curse of the Earth Totem” continues that trend with another mash up kind of episode. Last time was Abba and Groundhog Day. Now, it’s a sort of romantic comedy and pirate adventure. And they make that goofy combo work.

The show starts off in the Bahamas in 1717. It looks like a fairly normal pirates going to bury their treasure kind of scene, but that just wouldn’t fit for the Legends. Something goes horribly wrong, and things aren’t looking so good for some of the sea dogs there.

Our heroes are aboard the Waverider, with Ray trying to do a team briefing about their new quest for the six totems. Oddly, while Ray is a brilliant inventor, scientist, and designer, he apparently can’t draw worth anything. Aside from mocking his (lack of) artistic ability, the team has a few different reactions. Mick jokes about collecting the set and Amaya only knows about five totems, not six. There’s also the set up for Sara going on a date, although not with who they first thought, and we learn about another one of Mick’s disturbing hobbies.

Sara’s date starts off awkwardly, with a lot of confusion about who is supposed to do what. They both have very difficult “jobs,” and finally agree not to talk about work. Relationships are complicated enough, they agree, without legends, supervillains, and time traveling. Given her history there, I’m not sure Sara picking Star City was the best location.

Leaving the Legends unsupervised is never a good plan. While their unofficial motto is “Sometimes we screw things up for the better,” there’s a reason that “sometimes” is the first word. Their first stop is modern Detroit, where they hope to get the pieces of the broken fire totem, which is in the collection of the modern Vixen’s mentor. That doesn’t work out quite as hoped, but Nate steers them to the Bahamas we saw in the opening. Zari attempts to be the voice of reason, mentioning not screwing up history before Sara even gets to her appetizers. The team goes back to the Bahamas to see if they can find the earth totem.

Unusually for Legends, there’s an additional subplot this week that doesn’t involve any of the current team. Former Time Master Rip Hunter, on the loose and on the run, goes to China to find another CW/DC character who is at loose ends: Wally West, AKA Kid Flash. Last we knew, he was in Blue Valley, the character’s home in the comics, but now he’s off in Asia, meditating after Jesse Quick broke up with him. Rip tries to recruit him, and they end up having drinks.

Mick tries to cheer up Amaya as they wait to find Blackbeard in the pirate-filled bar. She’s feeling conflicted about her granddaughters and her fated return to 1942 (although I think she’s overlooking something). Sara’s date gets odder as we learn about her most embarrassing moment, the first time she ever held a weapon, and she gets a tattletale voice mail from Gideon. Shaking her head, Sara says things are normal, which is pretty much true for this band of misfits.

Mick, Nate, and Ray take a really odd approach to shaking Amaya out of her funk, and spread the legend of “The Dread Pirate Jiwe,” which to me also sounds like a nod to The Princess Bride. Other pirates pick on the stories and build her reputation until Blackbeard finally shows up, and they stage an entertaining way to make her look even more dangerous. Back on the ship, Gideon complains about the Bermuda Triangle, and the ship loses power. So that’s going well.

Amaya and Mick talk to Blackbeard and push for information about the Totem. Their negotiations are interrupted when the British Navy shows up to arrest all the pirates. That wouldn’t be a big issue, but they have help in the form of the smugly annoying Damian Darhk, accompanied by daughter Nora. Things go badly for the team, and Amaya suffers a loss. They also learn that Blackbeard isn’t quite what they thought, and tough guy Mick looks disillusioned.

Rip and Wally share drinks and sorrows as Wally reflects on why he never fit in with Team Flash and Rip muses on the loss of both of his star proteges. Rip asks for a few favors, and a drunken (thanks to Cisco’s Rocket Fuel) Wally agrees. This goes badly for bumbling Time Bureau agent Gary, and then gets a treasured possession back to Rip.

Things are going about as bad as you’d expect in the past. Amaya and Mick are about to be executed with Blackbeard, and the Waverider is still having massive technical problems. The cloak fails and Damian directs the British Navy to fire their cannons. The Waverider flees, and a stunned Sara looks at the window in time to see it crashing, leading her to ask for the check. Her date, who ducked out to handle a different crisis, comes back to an empty table. That’s not going to help things at all.

Using their newly acquired gadget from Gary, Wally and Rip take a randomly unexpected trip. A pissed off Sara returns to the ship and gets brought up to date on their misadventures. Even in the midst of chaos, the team tries to encourage Sara about her date, which is sort of sweet. Until they manage some repairs, the team can’t get back to Mick and Amaya.

Speaking of, she and Mick go to a bar to round up a new crew and set sail for Blackbeard’s buried treasure and, more importantly, the missing Totem. Mick continues to be disappointed in Blackbeard, proving that bit about never meeting your heroes. Finally, they manage to get what they need to set off for the treasure and hopefully catch up with Damian… but if they do, then what?

As the pirate Legends take off, the Waverider group finds a new anachronism, which gives them a hint as to what’s going on. Nate and Gideon continue their running argument about Bermuda vs Devil’s Triangle. In the past, everyone seeking the Totem finds more than they were expecting. Almost as annoying as “leave the most powerful members of the crew on the ship” is the secondary but related ongoing issue of “make sure the gadget guys don’t have their stuff,” as Mick gets knocked around by something he could have handled if he had his signature weapon. Nate and Ray manage to rejoin the team in the past while Sara ends up having an argument about her date before getting distracted by unexpected boarders.

The Darhks continue to be annoying villains, and seem like they’re ready to kill the heroes and make off with the new Totem. The cavalry comes at just the right time, and Ray gets to try out his anti-magic gun. Personally, I’ve never been a fan of magic and science mixing like that, but it seems to be effective. The pirate plot gets settled, and Amaya, in a much better mood, shows just how good a mood it is with Nate. Sara makes things up with her date, while Wally and Rip suffer hangovers and make new plans. Ray shows that he has a really big heart, and yes, it’s probably too big. After a talk with Mick about how he’s changed for the better, Ray does something foolish that only works partway. It does show a major weakness of Damian’s, but ends badly for Ray.

What I liked: The date was fun, if short. The Wally and Rip scenes were amusing. I liked the Dread Pirate Jiwe, and they even threw in a bit with her at the end. Ray made a bad choice, but it was entirely consistent with his character. However much he resists, Mick is slowly becoming a sort of first officer to Sara, and it works. Plus, y’know, pirates!

What I didn’t: Mick not having his weapon, or Ray his suit, keeps happening and it just doesn’t make any sense. The Waverider being randomly crippled is getting almost as old as the powered heroes not using their powers. Damian is usually a fun villain with great delivery, and none of that happened here.

Despite the shortcomings, the show continues to be fun and entertaining. I’ll give this one a 3.5 out of 5, and I’m curious about the cliffhanger they left us on.