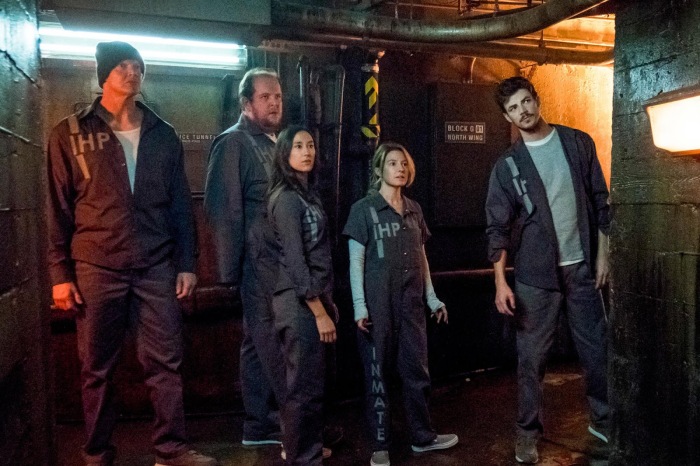 Anyone else have the Hogan’s Heroes theme stuck in their head?

The Flash is in for a bad night as we get to see several characters’ “True Colors.” Last episode ended with Barry being captured after Wolfe learned his secret. Now, he’s up for sale, along with several other familiar faces, to Amunet the Blacksmith, played delightfully insanely by the returning Katie Sackhoff. A word about the capture, by the way: Barry has to drink one of Cisco’s special potions to get drunk, but Wolfe was able to drug him with what was on hand in the prison? I don’t buy it.

Ralph goes to his office, making him one of the few members of Team Flash with a life outside STAR Labs, and runs into an old acquaintance, Earl Cox. Earl has passed out on Ralph’s couch, and comes with an offer to run a con on an old, wealthy client. Ralph turns him down, and Earl tells him that when he screws up and lets his new friends down, Ralph should call him. Psychological warfare against your supposed friends is really not cool.

Iris and Cecile go visit Barry, and get stalled by Wolfe. Since he has Barry locked down in his own metas-for-sale wing, Wolfe makes up a story about a fight and a mandatory lockdown. Score one for pregnant Cecile telepathy (as seen last week); she knows Wolfe is lying and warns the others. Harry is away visiting his daughter on Earth 2 (wasn’t she on Earth 3 last we knew?), so they are down one sarcastic genius this week. Ralph, fretting about his visit from Earl, lets his worries run wild and ends up showing a new power that neither he nor Plastic Man have in the comics. This gives the team an idea about what to do about Amunet buying their friend.

The prisoners who are about to be sold, all the “bus metas” created by Thinker, try and escape and generally bicker with each other. Watching via video, the Mechanic is worried this will mess up the plans. Thinker 2.0, in his new body, isn’t sure what to do since he has so many ideas floating around in his head.

Barry engages in some sabotage to make a workman come to his cell. While he’s there, Barry steals some tools from the man, which is why in the real world, repairs are done only after a prisoner is taken out of the cell, preferably the area entirely. Sloppy writing to justify furthering the plot, there. Back at STAR, the team tries to hone Ralph’s new power to help out Barry. It does not go smoothly.

In the meta-wing, Barry swaps in his Flash costume for MacGyver’s skill set and manages to get himself, and everyone else, out of the cells. They all come to an uneasy agreement to work together. Most of them want to escape, but Barry has to talk Becky Sharpe AKA Hazzard into coming with them.

As they start the great escape, Central City version, Marlize the Mechanic has updated the Thinker’s flying chair. There is some tension between her and her new and improved husband. He does remember something she was worried he’d forgotten, and she has also found a way to block his telepathy, which is a throwback to what happened last week with Joe and Cecile. That scene ends with what may be supposed to be sweet but sounds really menacing.

Ralph goes to try the team’s bluff, and it’s more comic relief than effective. In one nice touch, he orders a Gingold at the bar. Gingold is a special drink that is part of the Elongated Man’s origin in the comics. He does manage to talk his way into a meeting with Amunet.

The escaping cons make their way through the tunnel (because prisons are built over easy ways to escape, right?). They find the plumber from before, and argue about what to do with him. Barry settles the debate by knocking him out instead of killing him, and Becky approves.

Ralph, who is never the most serious character to begin with, plays well off of Amunet’s quirky villainy. He tries to do what they need him to, but starts having problems. Eventually, he runs for his life while Amunet gets ahold of Wolfe, who tells her some different lies. In the aftermath, the team tries to come up with a new plan. Ralph, beset by doubts, opts out in a haze of depression and worry.

The prisoners find the last door they need to get out. Dwarfstar proves to be an idiot, but Kilgore is useful even without powers. While they work on getting the last obstacle out of their way, Becky and Barry bond over bandages and talk of past injuries. Barry repeats something to her he’s said before in the series— their powers don’t decide who they are, they do.

Caitlin goes to visit Ralph in his office, but he’s not in the mood for a pep talk from her. So, she enlists someone else, and forces herself to switch to Killer Frost. Frost actually makes some really good points, and talks Ralph down from some of his insecurities. At the end of it, Ralph calls her “Frosty Oprah.”

Kilgore manages to get the door open finally, they end up in the old prison rec yard, and things go seriously sideways from there. Wolfe shows up with a bunch of thugs and takes Barry out of the fight with a lucky first shot. Wolfe turns the cons against Barry with some well chosen words, with one exception. Becky’s luck powers make the odds thin out quickly, but then Blacksmith shows up with her own thugs. Just to make it seem even more like the Battle of Five Armies, Vibe opens a portal and brings in the heroes. And then Thinker arrives. Things get really, really ugly, and most of the gathered characters don’t survive. One probably wishes they hadn’t. Barry, true to form, refuses to escape even under these circumstances.

Cecile’s court hearing is just about to go as badly as possible when something utterly unexpected happens. The heroes pull a trick that surprises not only the judge, but Marlize the Mechanic as well. Eventually, after a lot of amusing befuddlement, Barry is freed. The heroes have a party to celebrate and then come to a chilling realization. Elsewhere, the Mechanic continues to have really bad luck with her current relationship. Or the new version of it. It’s kind of confusing, really.

What I liked: Barry is out! That’s the big good news. Ralph’s new power is an interesting twist, and not one I saw coming. It was great seeing Marlize caught by surprise. I liked Becky standing up for Barry. Sackhoff’s Amunet is always fun to watch.

What I didn’t: The CW-verse has a really high body count, and they add a lot to that this episode. I liked some of the characters that got killed off, and I’m annoyed that they seem to think the best way to keep secrets is to reveal them then kill almost everyone who learned them.