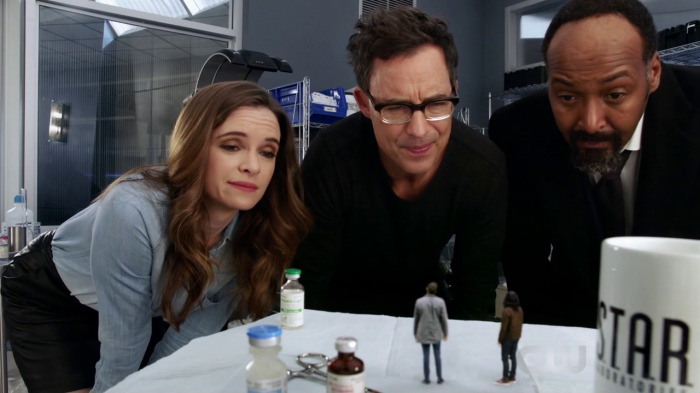 Ralph and Cisco have a little problem (Oh, c’mon, I had to…)

It’s become a given on most of the CW shows that a scene showing a normal domestic event is going to go strange at best, bad at worst. When “Honey, I Shrunk Team Flash,” opens with Joe trying to figure out how to build a crib, you just know something’s going to happen. In this case, it appears that Cecile has developed telepathy, and has little idea how to, or interest in, controlling it. A quick visit to STAR later, and we learn that it’s likely temporary, a side effect of her pregnancy. And you thought cravings and mood swings were bad…

Wells, with his usual gruffness, doesn’t care about Cecile’s new power. He’s a lot more worried about working on getting Barry out of prison. The team goes over what they have, and admit they essentially have hit a brick wall for now. For some reason, this seems to be upsetting Wells more than anyone else. Then again, Wells is a refugee from another Earth, and probably doesn’t have a lot else to distract him.

In Iron Heights, Barry is playing cards with his fellow prisoners, and apparently using his powers in a really non-heroic manner. It’s a small thing, but it kind of disappointed me. Why is he stooping to this? In the tensions after the game, Barry learns why his friend Big Sir is really in there, and decides to turn Team Flash on the problem. Big Sir doesn’t have the reaction Barry was expecting.

The city’s new mayor, Van Buren, dedicates a new KORD Industries building, detailing the facility’s many security features. KORD is the comic book business of Ted Kord, the Blue Beetle, who so far has had his company mentioned all over the CW-verse, but hasn’t been able to appear. The entire building glows and then vanishes, and a disgusted mayor remarks, “I hate this city,” as she leaves. There’s also a great line about high-tech thefts being out of hand in both Central and Star City, a poke at a recurring plot on both Arrow and Flash. We see the villain of the week walk off with a miniaturized version of the building.

Joe is joined on the scene by Cisco and Cecile, who wants to use her new-found power to help. She’s randomly reading the minds of everyone around with apparent glee. I kind of wonder what her reaction would be if someone did something like that to her. Cisco confirms dark matter at the scene, so they are fairly sure a new meta is on the loose. They get a slim lead from a nearby ATM camera.

Barry calls Joe, and he passes on the imprisoned speedster’s request to the STAR crew. Ralph especially doesn’t see why they should dig into Big Sir’s case, but Wells mentions this has been Barry’s only request since going to prison. After some dissension, they agree to look into it. Barry goes to relay the news to Big Sir, who once again isn’t impressed.

Joe, Cisco, and Ralph pay a call on Sylbert Rundine, their suspect in the Kord building theft. It goes well at first, but he realizes they suspect him and he unleashes his powers to make a getaway. They give chase, and we get the title of the episode as Cisco and Ralph are suddenly not quite as they used to be. Following up on things at STAR, they learn that PalmerTech’s remaining supply of dwarf star alloy was stolen on the same day as the incident on the bus. With Ray off with the Legends, they manage to get hold of Felicity for some more info. After an amusing scene with Wells coming up with a unique way to keep Cecile out of his head, Iris refers Joe and Cecile to Dr. Finkle, who is becoming a recurring comic relief bit. Cecile does learn Joe doesn’t like her in his head, at which point I’m stunned that she needs to have this pointed out.

Barry talks Big Sir around to being cautiously hopeful about his case. Cisco and Ralph have been relocated to the Lego mockup they used to prevent Iris’ death at the hands of Savitar, and Wells comes in with an idea on how to change them back to normal. Let’s just say things don’t work out, and there’s added urgency to finding the bad guy.

While Barry talks about the prison pudding being so good (a running joke, as it was a part of the plot with Trickster a bit ago, too), Big Sir asks how things are going outside. Then Warden Wolfe comes by with a few questions for the Fastest Inmate Alive. After Wolfe delivers a grim warning, Iris and Cecile go out for coffee and to talk about the strain her powers are putting on the relationship with Joe.

Caitlin and Wells are working to cure their friends, and getting nowhere. When Caitlin takes Ralph away for a bit, Cisco gives Wells a pep talk. They figure out what they need to do, and involves finding the bad guy, who Cisco has dubbed Dwarfstar. We see him causing trouble at the Central City weather station. The heroes, running low on time, rush there to confront Dwarfstar and try and save Cisco and Ralph. There’s a lot of fighting and then they finally manage to win, largely due to some dedication from Wells. It’s a mixed bag, as they catch the bad guy but he won’t agree to clear Big Sir.

Barry and Big Sir have a talk, and Big Sir takes things remarkably well. Then Barry decides to break multiple laws to try and make Sir happy, and rushes him off to his ideal place to be. At the West house, Joe and Cecile have a talk about her powers and how to handle things. Cisco and Ralph, happy to be restored, return to STAR, where they wonder if all of this is part of DeVoe’s still unidentified plan. Barry gets a nasty series of surprises, and we learn that at least one person at Iron Heights is corrupt.

What I liked: The bad guy, while different from his comic book version, was amusing and a different spin on a power we’ve seen before. I liked the nod to Ray Palmer and Felicity. Barry, no matter what’s going on, is just a really amazingly good person. He really is this world’s version of Superman in terms of his outlook.

What I didn’t: Did we need another visit to Dr. Finkle? Cecile seems really clueless about the ramifications of her power. DeVoe, the big bad, gets mentioned but doesn’t even show up. Barry was overconfident which led to his problems at the end, and really, why is he using his powers to both do petty things and break the law? This is the big hero?

This was my favorite hero show for a long time, but I really feel it’s slipping. I’m giving this one a low 3 out of 5 and that might be generous.