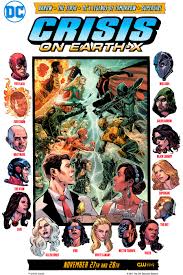 Part four of Crisis on Earth X jumps in exactly where part three ended, as Legends of Tomorrow finishes the team-up. As the huge battle rages in the Nazi base, the major focus for a lot of the team is Professor Stein, shot and bleeding badly. The team finally manages to beat the bad guys, allowing Jax to get to Stein. They merge into Firestorm in a desperate attempt to keep him alive. Flash and Ray manage to do a very odd combination of powers to defeat Red Tornado, saving the portal but depriving the resistance of a powerful weapon. Finally, everyone gets through the portal to go back to Earth 1.

Back at STAR, Kara groggily wakes up on Thawne’s operating table. He mocks her and tells her to close her eyes as he gets his scalpel ready. He’s confused when he can’t cut her, but we soon see why; ATOM has arrived, and shrunk, and caught the blade before it could get to her with his armor. Not knowing what’s been going on, Ray Palmer asks how the wedding was. Poor guy always did have horrible timing. Ray also uses a new power I’ve never seen before, when he selectively grows just his arm to swat down some troops. That sounds more like a Plastic Man trick, which makes me wonder where Ralph is. I can see him not being invited to the wedding, but shouldn’t he still be around here somewhere? Steel frees the others from the Pipeline while Amaya and Zari beat down some more Nazi thugs.

Dark Arrow goes to wake up Overgirl, and bicker some more with Thawne. Does anyone get on with the Reverse Flash? No wonder he keeps dying. While the Nazi trio bicker, the rest of the heroes arrive from Earth X. While Snart is amused by being on Earth 1, and we’re left to wonder why the superhumanly powerful Steel is using a blaster, a groggy Kara asks how Ray and Felicity know each other. As they chorus that they used to date, Kara just barely has time enough to say that’s awkward before Ray get shot in the back by Dark Arrow. Felicity turns and says, “Get the hell off our Earth while you still can.” Dark Arrow responds, “As last words go, those aren’t bad,” before the smug evil archer gets set back by “our” Oliver showing up with a green Kryptonite blade to Overgirl’s throat. While Cisco is amused by people making Terminator references, The Ray, Firestorm, Killer Frost, and Black Canary turn their powers loose on Metallo. He doesn’t last long. The other groups come to a stalemate before Thawne speeds the big names away.

A group splits off to get back to the Waverider, where Firestorm splits and Mick sees how badly Stein is hurt. As Gideon rattles off Stein’s injuries, Mick goes from confident to worried. He then gets another blow as Snart shows up, thoroughly confusing him and making him think the ghost he was hallucinating a while back has returned. Mick finds out that not only is he dead on “planet Nazi” but that he died saving cops. It’s hard to say which upsets him more.

Jax wakes up, and sees Caitlin and Gideon working on Stein. Jax staggers away, worried, and Caitlin confides to Ray that she doesn’t even know why Stein is still alive, let alone have an idea how to heal him. The Firestorm bond is the only thing keeping Stein alive, but it’s going to be too much for Jax eventually. Ever-optimistic, Ray tells Caitlin that there are a lot of smart people on the ship, and someone will figure something out.

Curtis, one of those smart people, enthuses over being on the Waverider. Amaya and Zari comment they got the right guy to help them find the Nazi Waverider. Curtis starts studying the information they have, and figures out that Overgirl isn’t going to die from the excessive solar radiation that’s killing her; she’s going to go supernova, which will be bad for anyone anywhere near her, say, on the same planet. While this bad news is digested, more comes from the medbay. Stein has woken up, and knows what’s going on. After a tearful farewell, he finally convinces Jax to drink the serum to sever their bond. Stein dies, and, as far as we know, takes Firestorm with him. This news ripples out among the team, saddening everyone, and then Jax has the ugly task of informing Clarissa and Lilly of Martin Stein’s death.

After a brief scene with Sara, Oliver addresses the collected heroes. He has an idea of the bad guy’s plan, because it’s what he would do, and the bad guys are kinda being led by him. As the heroes get together, Dark Arrow and Overgirl are on the other Waverider. That ship’s Gideon is played by Susanna Thompson, better known on these shows as Moira Queen, and she tells them Overgirl will die within an hour without the transplanted heart from Kara. A desperate Dark Arrow tries to make a deal, saying he’ll go back to Earth X if Kara comes with him. Oliver declines.

What follows is, of course, a massive fight. Among the cool bits: Killer Frost uses her powers to make an Iceman-like bridge, ATOM shrinks and rides one of Mr. Terrific’s spheres into the midst of the enemy, and Snart lectures Mick about not roasting people. Mick’s gonna need a lot more to drink when this is all over.

Now that he’s awake and free, Cisco is having a ball on the bridge of the Waverider as they dogfight their opposite number over the city. What they finally do is have Supergirl get Overgirl off the ship, use Cisco’s powers to get an “away team” on the other ship, and disable their shields. It’s a very Star Trek moment that I’m sure Cisco enjoyed to no end.

In the big fight, one of their major special effects moments was the fight between Barry and Thawne. The two speedsters move through what to them is a frozen scene, trading blows all over the city. Finally, Barry wins, and then, in a scene that makes absolutely no sense, lets Thawne go. Really? Let the superpowered killer who has now allied with Nazis run off to cause more problems? Why in the world did Barry think that was a good idea? Supergirl manages to get Overgirl high enough that, when she explodes, there’s no damage except to her. Kara’s plummeting form is caught by Nate, who comments that it took a Man of Steel to catch the Girl of Steel. Oliver and his counterpart end up in a major fight and Oliver takes some decisive action to ensure this doesn’t happen again.

Cisco takes the Ray home to Earth X, I guess to the adventures we’ll see in his animated series on the CW Seed. The Nazis there should be a lot weaker, with Overgirl, Dark Arrow, and Reverse Flash out of the picture. Cold decides to stick around, but promises he’ll come back to Ray.

Then, it’s time for Stein’s funeral, which manages to upset even Mick. The various characters say their goodbyes. I kind of wonder if this is the last time we’ll see Clarissa and Lilly, too. Stein was the only Legend to really have a family back home, discounting Jax’s mom.

Team-up over, it’s time for goodbyes. Sara and Alex at least part on a good note. Mick makes a comment that earns him a head slap from Sara as they get aboard and the Waverider takes off for more adventures, although with the loss of another crew-member. Alex even gets a hug out of Oliver before going home, which is impressive. Then, in a sort of wild wind up to end things off, Barry and Iris decide to elope, because there are “fewer Nazis” that way. Barry zips back to Star City and brings back Diggle, who was ordained to marry his brother a long while back, and is still having issues with superspeed. Diggle ends up marrying Barry and Iris and then, after Felicity proposes, Oliver and Felicity as well. It’s a nice ending, and a bright spot in the very dark seasons both Flash and Arrow are in the midst of.

What I liked: It was great they brought back Moira as the voice of the evil Waverider. A lot of the little team-up moments were very nicely done. I love that they’re keeping the running gag of Diggle’s problems with superspeed, and that they managed to get him in to at least some of the crossover. The new Snart should be fun with Mick, although rumor is it won’t last. Stein got a good final scene and a nice funeral.

What I didn’t: Barry letting Thawne go made no sense at all. I could see Barry not killing him, but with that many heroes there, they could have gotten him to the Pipeline. It was a glaringly weird decision that I hope they explain sometime. I have griped about them not using Firestorm well often, but this was an extreme way of dealing with that. I hope we eventually learn Jax has at least some powers. It was really odd that Earth X is the only place we’ve seen so far that combines Arrow-verse and Supergirl Earth, and the only doppleganger of the Waverider we’ve seen so far, although with no crew. I get they needed to stop him, but destroying Red Tornado is going to deprive the resistance of powerful asset, and even with the big three gone, the heroes on Earth X are going to have a long way to go.

I overall really enjoyed the crossover. It had a few odd moments, but played out really well on the whole. I’m going to give this episode a 4 out of 5, and the same rating to the crossover itself. I wonder what they’ll do next year?