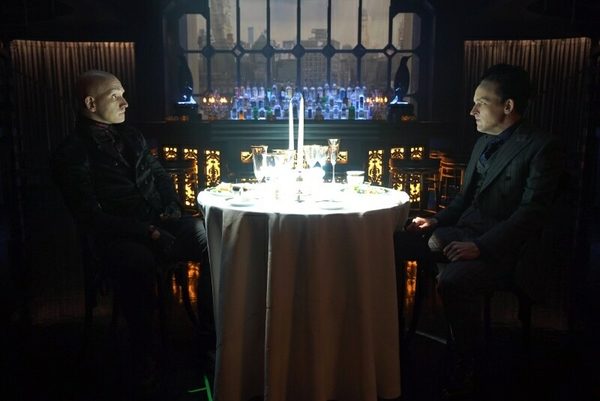 In the midst of Penguin’s crime licensing scheme, and Riddler skulking around the shadows with Grundy, Gotham gets a new problem. Yet another of Batman’s rogues turns up a good bit before Bruce puts on the mask. As if Gordon needed more tension on the job. There’s a lot going on in “Hog Day Afternoon.”

The action starts at Cherry’s, the underground fight club we’ve been seeing a lot of. Riddler sees Lee, and they have a sarcam-ridden reunion. She’s not impressed he’s unfrozen, and she’s not about to help him. She’s shocked to see Butch as Grundy, and doesn’t buy Riddler’s story that he not only didn’t do it, but doesn’t know what happened. He tries to make a deal with Lee, but in his current condition, doesn’t have the insight to figure out how to get on her good side or get any leverage on her.

While Riddler demonstrates his relatively new lack of intelligence, Sofia continues whatever plan she has going with Penguin. It’s sort of like a sped up Beauty and the Beast but with some weird ulterior motives behind the scenes. Gordon is spying from the shadows, and demands to know what she’s doing after Penguin leaves. She makes some vague answers but won’t share.

Elsewhere, some of Gotham’s crooked cops (which I guess is most of them) are getting paid off. The guy giving out payments gets lured down a dark alley and attacked by this week’s guest villain, Professor Pyg. Pyg was created by Grant Morrison in 2009, so he’s a relatively recent addition to the Bat-Rogues. The next day, Gordon and Bullock are on the scene, because they’re about the only working cops in Gotham. The dead cop is found with a pig’s head over his like a mask. Eventually, they figure out he’s one of Penguin’s bagmen in the payouts for the licence scheme. Because he’s Gordon, Jim goes off to see Penguin about this.

Penguin is in one of his jovial, overbearing moods as he gets ready for lunch with Sofia, and seems amused by Gordon’s visit. He listens to what the detective has to say, claims ignorance, but then directs his accountant Penn to help out. Penn goes over his ledger and makes a suggestion, sending Gordon off on a new lead after more overconfident snark.

While Pyg is doing weird things, Gordon brings in the thief Penguin and his nebbishy accountant steered him towards. The crook, Wally, claims ignorance at first, but admits what’s going on when Bullock and Gordon lean on him. They eventually work out there are going to be three more victims, and Bullock knows Penguin has 3 more cops doing payoffs. They also hear about “the Professor.”

Penguin gets stood up for his lunch with Sofia, and Zsasz begins some ill-advised teasing of Penguin about them dating. Penguin sends his hired killer out to follow Sofia and see what she’s up to. While this goes on, Grundy makes his debut in the ring of the club, and kills the reining champion messily. Lee looks away, queasy, and she’s hard to shock these days.

Bullock and Gordon are leaning on cops to tell them who the other bagmen are, and not getting anywhere with it. They finally go to some rather extreme measures to get some information. They try and follow up on the names, but find them dead with the signature pigs’ heads on them. The Professor has his gimmick. Gotham being Gotham, no one admits to seeing anything until Gordon manages to home in on one bystander to get another lead.

Back at Cherry’s, Lee tries to patch Grundy up after the fight. He’s “bleeding” what appears to be swamp water, and has no heartbeat she can find. She tries to turn him against Riddler, but Grundy is too stupidly loyal, and then Riddler himself walks in. He tries to buy Lee’s help in restoring his intelligence, and she turns him down. Riddler follows her to an underground clinic she’s running to treat the poor. This makes no sense to me. If she’s running an off the books, not funded clinic, why wouldn’t she take money to help with it?

While Zsasz follows Sofia around town, Gordon checks in at Bullock’s office. Between them, mostly through Bullock’s information, they work out who the other bagman is. Bullock points out that Pyg is only killing corrupt cops and wonders if it’s someone making a stand. Gordon points out the killer seems to know a lot about police schedules and wonders if Pyg is a cop.

While Gordon goes to follow up another lead, Pyg plays with his newest prisoner. But someone else is having a worse day, as Grundy fights and kills his next foe in the ring. Both Grundy and Riddler seem to be enjoying this. Zsasz reports back to Penguin about Sofia, and they debate “chat” vs “shovel in the trunk kind of chat.”

Lee tries to drink her troubles away at Cherry’s, and gets interrupted by Riddler, gloating about his winnings. She recommends he finds a neurologist, which she isn’t. Riddler tries to blackmail her, but can’t even finish the threat in his current condition. She laughs in his face.

Gordon and Bullock find the next victim, and get a nasty surprise about what Pyg’s done this time. Gordon recovers from the surprise and ends up having a talk with Pyg. Pyg isn’t really forthcoming about what his motivations are, but he denies being a cop. When Pyg goes off to deal with Harvey, Gordon makes an extremely unlikely escape, and then Pyg forces Gordon to make a nasty choice.

Lee’s clinic has some supply issues, and the doctor makes a fateful decision. We also hear about why she’s doing what she’s doing, and for that matter, why she’s back in Gotham again. Riddler is happy to hear about her choice. Grundy is just happy to wave, “Bye, pretty lady.”

Sofia is getting all dolled up for something when Penguin drops by. He’s in one of his more manic phases, yelling out his accusations against her. They take a short trip where we learn both what she’s been doing and that Zsasz does not do well with kids.

The show wraps up with Gordon and Bullock having a confrontation that is likely to change a lot between them. I think that one is going to get ugly later. There’s a final scene with Pyg that’s really unclear about both what he actually does there and what he’s up to next.

What I liked: I’m enjoying the Grundy/Riddler/Lee subplot. Lee’s reason for being around makes a lot of sense. Gordon is borderline obsessive, if not wholly over the edge, but at least he’s true to himself. Lee’s reaction to Grundy was great.

What I didn’t: I have to admit, I’ve never been a fan of Professor Pyg, and he didn’t wow me here. While it makes sense, I don’t like what happened with Bullock and Gordon.

I’ll go a solid 3 out of 5 on this one. It had some interesting developments, but almost felt more like set up for later events.

Taking the Week Off: Bruce and Alfred must have been off training again. Barbara, Tabitha, and Selina are presumably plotting something or other. Ivy is still missing in action. Lucius wasn’t around, but again, he wasn’t needed as tech consultant. I’d love to see him and Cisco from the Flash talk shop sometime.