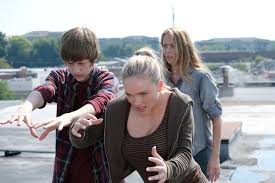 This is NOT what I meant by a family outing, kids!

Continuing their trend, The Gifted opens with a flashback from two years ago. At least it’s not a CGI’d island. This time, John Proudstar is leading a raid on a Sentinel Services relocation center. Things go really badly, and a young mutant named Pulse ends up sacrificing himself. He uses his power to disrupt electronics to shut down the automated weapons systems, allowing the others to escape, but he gets shot and goes down before he can get back to the others. John regretfully leaves him to get the others to safety.

In the present, Lorna is brought to a new facility. She and Turner exchange barbs, and she asks that he call her Polaris. She’s very proud of her codename, apparently. Lorna is sarcastically amused to learn she’s in a cell block with Reed Strucker, who, last she knew, was prosecuting her people. Reed tries a few peace overtures, which she ignores. It’s an interesting scene, if you ignore that no agency anywhere puts males and females in adjoining cells. It’s a major liability issue.

Back at Underground Headquarters, John is trying to plan an operation to free Lorna and Reed. He doesn’t know much about where they’re being sent, but he knows that people don’t come back from it. Most of the members of the group aren’t happy to hear about the plan to go head to head with Sentinel Services. Sage, a mutant with a computer-like mind, estimates they have an 86.5% chance of failure. Most of them opt out of joining the mission. Even Marcos’ pleas, reminding them all of what Lorna has done for them, don’t get them much. Dreamer is in, but her powers aren’t exactly combat-oriented. Shatter, the man who can turn invisible, joins in, along with Eclipse, John, and Clarice. Caitlin Strucker, of course, volunteers to come along. She’s been so against direct action that I’m halfway surprised she joined up, even with Reed’s freedom on the line.

While Andy and Lauren worry about their father, and Caitlin tries to reassure them, Marcos makes a desperate decision. Apparently, he has a past with a never-named cartel, and he’s going to go to them for help. I’m a bit unsure why a (presumably) drug oriented operation knows about mutant prisoners being moved around, but apparently they do. Caitlin makes what I would think is the basic and obvious suggestion of hitting the transport, not the prison. None of the experienced fighters thought of this?

While Marcos goes to make contact, Dreamer and John have a talk. He’s still not happy with her for using her power on Clarice last episode. John, being the man he is, wants to tell Clarice what happened and why. Dreamer has several self-justifications, and says what she did isn’t a real memory, it’s like a dream and will fade. Judging from how Clarice is sleeping, that’s not quite accurate.

Marcos goes to his old cartel contacts, and the guard out front clearly remembers him and knows about his powers. Inside, Marcos is brought to Carmen, an old flame who has some mixed feelings about him. It’s a careful dance for him to get the information the group needs and not fall too far into Carmen’s clutches. They compare notes on what’s changed since Marcos left, and he’s impressed in spite of himself. But she has some demands before she helps a bunch of outlaw mutants who have nothing to offer her operation. Marcos manages to call in at one point, and John is getting worried about him.

John briefs the team, and even he admits things don’t look great for the rescue attempt. Lauren has been listening, and has an idea. Taking her brother Andy, she works out a clever way to combine their powers. It’s a really good idea, and I give her points for the concept.

Reed tries once again to reach out to Lorna, and she’s still not inclined to listen. He tells her a bit about what’s happened with his family, and how it opened his eyes. I’ll just say Lorna isn’t the most forgiving person, although that’s understandable in her current situation. While this goes on, Lauren and Andy demonstrate their new trick. John is impressed, but Caitlin is determined to not let her kids be part of the risky mission. Lauren finally prevails with an impassioned speech.

Marcos finally finds out what he has to do for Carmen, and it’s not something he wants any part of. However, he really wants to get Lorna free, so he eventually agrees to the distasteful task. He comes through for her, and she makes some cutting remarks about Lorna before letting him go. The things we do for love… Marcos makes it back to the base, and lies a bit to John about how things happened.

The night passes uneasily for most of the mutants, between weird dreams and worry about the pending attack. The next day, both sides get ready. The mutants get into position for their ambush, and Turner and his men get the prisoners ready for transport. Lorna and Reed are put in a plastic cage, similar to how we’ve seen Magneto imprisoned in various X-Men movies. As preparations continue, Clarice talks to John about her odd dreams, and the adjustment to living in the base. The Struckers get ready in their position, and Lauren remembers something from their “real” life before all this happened that both saddens her and drives home how much things have changed. While that goes on, Marcos cautions Dreamer and Shatter that, if things go badly, he’s not going to leave without Lorna, but they should.

Finally, things kick off. The convoy arrives. Lauren helps Andy with some focusing powers in a particularly big sister way. The convoy doesn’t stop exactly where they wanted it to, and the plan starts falling apart. Reed pleads with Lorna to take their chance if they get it, and she grudgingly starts to listen. The mutants finally attack, but they find out the Sentinel Service guys brought along a nasty surprise. Pulse, from the opening scene, has been brainwashed or something into working for them, and evidently his ability isn’t just being a walking EMP; he can also shut down mutant powers. They also confirm that, in this version, tracking is a power, not a skill, for John, which is a bit odd.

Things are looking bad for the good guys, especially with no powers. Caitlin and John take some fairly heroic action outside, and John is stunned to see Pulse alive and working for the enemy. Reed makes a heroically painful suggestion to Lorna, and even she looks squeamish about it. John knocks out, but leaves behind, Pulse, and the heroes manage to escape. An infuriated Turner is going to start making things hard for any and all mutants he can as payback for this.

What I liked: John Proudstar is really impressing me as a character, even if they’ve screwed with his powers a bit. Reed’s reaching out to Lorna, and his eventual suggestion to get them out, was nicely, if gruesomely, done. I like Caitlin’s determination to do everything she can for her family, and her finally accepting that direct action is needed here. Andy and Lauren’s power combination was brilliant. I think Lauren has a future ahead of her as a mutant superhero. I’m glad Reed and Lorna being prisoners didn’t drag on all season.

What I didn’t: I’m not sure why John left Pulse behind with the Sentinels. I’d think grabbing him would have made more sense, either to save a friend or at least deny the enemy a powerful asset. I don’t know why the cartel cares enough to know when mutants are being moved around. I really hope the drama over the Dreamer/Clarice/John issue doesn’t last too long.

This has become my favorite superhero style show, and that says a lot with what’s on the air on these days. I’ll give this a 4 out of 5.