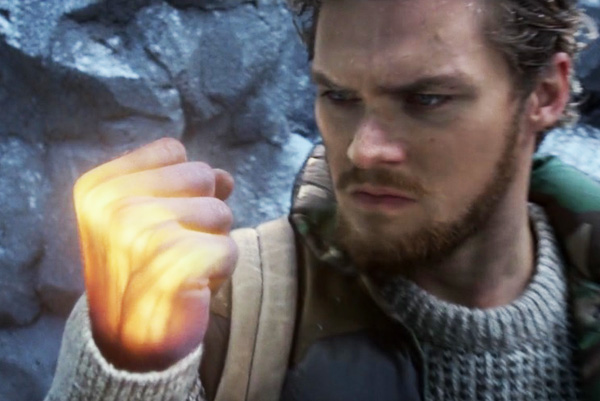 Iron Fist reaches the conclusion of season one (with sadly no confirmed word on season two as yet) with “Dragon Plays With Fire.” There are a lot of dangling threads they manage to (mostly) resolve, and they leave enough hanging if the show does return. And I’m relieved that a troubling rumor I heard about the show is proven false.

In the Penthouse, a very self-satisfied Harold stops to check his reflection in the mirror. He sees the news carrying the story of Danny Rand being hunted by the DEA and smiles. One car ride later, he’s at the lobby for Rand, abusing a guard for doing his job. I don’t know if they did this on purpose, but it’s an interesting parallel with Danny’s first time coming here.

In his office, Ward is talking with Jerri Hogarth, Danny’s lawyer. He assures her the charges are false, and she wryly observes he’s changed his tune where Danny is concerned. Their talk about Danny’s legal troubles with the DEA gets interrupted by Harold arriving. Jerri is, to put it mildly, stunned. After some more unpleasant comments from Harold, he dismisses Jerri, then shows Ward he doesn’t even know everything about his own office. Harold spins an unlikely story to cover his miraculous return from the dead, and then surprises Ward with another revelation about what’s been happening in the background with Danny.

Continuing to mirror the first episode, the next scene is Danny in the park. This time, he’s skulking around with his hood pulled up, avoiding the various police officers, since Danny is on the Most Wanted List. Colleen brings Danny a copy of the New York Bulletin, showing his picture as a dangerous criminal. They compare notes on how each other are, and then Colleen says they need a go-between to get to Jerri, since the Feds are probably watching her.

Naturally, this leads to Claire bringing a note to Jerri, and then Jerri to Danny and Colleen. Personally, I don’t think that’s the best way to go about not leading police to Danny, but it seems to work. Jerri isn’t thrilled to meet Colleen, who also has charges against her. They debate tactics and decide they need to try and find the unaltered documents that Harold tweaked to implicate Danny. Jerri doesn’t want to hear about Harold returning from the dead, gives some more advice, and leaves the three heroes.

Danny and Colleen return to The Hand compound, now eerily deserted. Working their way through the buildings, they find Madame Gao, still in her cell. She seems happy to see Danny, although she rains more bad news down on him. She also offers insights about Danny and Colleen that unnerve both of them. Danny leaves having learned more about the deaths of his parents and unsure about what to do next.

Danny, Colleen, and Claire talk about their next move. Danny is heading down a dark path, and Claire is trying hard to steer him in another direction. Colleen then complicates Claire’s life by finding a new unpleasant way to go. Claire compares Danny to the other “special” people she’s met, contrasting them all being dark and haunted with Danny’s innocence when she met him. She’s worried he’s losing that, and I’d say she has a point. She suggests they focus on the tablet that may prove Danny’s innocence.

Ward goes to see Joy in the hospital, and it’s not exactly a warm reunion. Given what she saw from Ward last night, she has no interest in talking to him, which might be one of her smartest decisions. They argue as he tries to justify himself, and tell her what a monster Harold really is. Joy isn’t buying any of it until Ward raises the stakes. He tosses down a copy of the Bulletin with the cover story about Danny the fugitive, and she is shocked.

In a surprising alliance, Danny and Ward meet up. Ward really does seem to want to help Danny. Whether Ward feels badly about how he treated Danny before or just wants revenge on Harold, I’m not sure, and I’m not sure Ward is sure, either. Ward warns Danny about the increased security, and Danny shares the news from Gao about the Rands’ deaths. Danny is still suffering his blurry flashbacks, and finally runs off, with Ward staring after him.

Motivated by Ward’s visit and news, Joy rises from her hospital bed and goes to Rand to confront Harold. He tries more of his lies, and she’s not buying them. She lays out how she knows Harold framed Danny, and Harold isn’t pleased. During the course of the conversation, Joy realizes Harold has been spying on her. They argue more, and Harold’s paranoia comes to the fore. He yells at her that whatever Danny told her is lies, ignoring Joy repeatedly telling him she hasn’t seen Danny. She finally leaves, with Harold furious behind her. Down on the street, Joy sees Ward, but ignores him and is driven off in her own car. I think of everyone involved in this story, I feel worst for Joy. She had the rug pulled out from under her life, and she didn’t do anything to deserve any of this. Ward goes inside after watching her take off.

Hiding in a car nearby, the Colleen, Claire, Danny trio wait. Danny has a big bag of money he’s giving to Claire for a distraction, while he and Colleen prepare to go inside. Ward calls them and says they need to call it off, because Harold has added so many armed guards. Ward’s warning gets cut off rather brutally by Harold.  Claire agrees they should try another night, so of course Danny refuses. Colleen follows after Danny rushes off, leaving a frustrated Claire to pick up the pieces of their plan. She’s not happy. Colleen and Danny manage to get separated almost immediately but keep working their way inside.

Harold gets a warning from the staff downstairs and readies his men for the ambush. Ward protests, but isn’t in any condition to really stop anything at this point. Colleen gets up there and starts her own counter-ambush, which is when Danny makes a very dramatic and unexpected entrance. There’s a lot of fighting here, and another new use for the power of the Iron Fist which I’ve never seen before. I’m not sure it quite works for the concept from the books, but it sure looked cool.

Eventually, Harold retreats to the roof, luring Danny after him. Harold positions himself really badly for his attack on Danny, which might be part of why he misses. Danny actually gets hit a bit later, and it’s an ugly-looking wound. As they stalk each other across the roof, Harold goes into another long monologue which makes him sound even less sympathetic as it goes on. The end of the confrontation goes very unexpectedly, or at least I didn’t see it coming. It made sense to me overall, although Danny steals one of Wonder Woman’s moves.

Sometime later, it’s day, and the hawk we’ve seen before flies through the city. It finally lands on a building, and then we see Ward and Danny inside. Jerri stops by to give them some good news, and they attend to something that really needs to be done. I’m hoping that’s the end of that little problem.

Once more back at the dojo, Colleen is still training Claire. Danny comes with pizza, and they talk about future plans. Claire, wisely, suggests therapy for both of them. She takes the claws she captured in China and walks out. Danny and Colleen make plans to go to K’un-Lun. I don’t think they’d be please that Danny brought them both someone they didn’t know and a former member of The Hand at that. Danny talks about his hopes for the future.

We end on a few closing scenes. Ward has made some changes at the office, and I’m glad he did. There’s a meeting between two very unlikely people, who don’t seem to have Danny’s best interests at heart. They’re overheard by another familiar face. Danny and Colleen go on their trip, and get a big surprise at the end of it, which is where we leave them for now.

What I liked: The action was good. Claire, as always, was a stable, wise presence who brought much needed common sense. I’m hoping Ward’s change of perspective is lasting and sincere. It was a nice touch that Colleen’s blade is still damaged. There are a lot of loose ends for possible continuation.

What I didn’t: For all the trouble he was having with it earlier, Danny’s power seems to be fine now. If he rebalanced his Chi on his own, we never saw it. I really don’t know why Danny thought the people of K’un-Lun would welcome Colleen. The final meeting over tea didn’t make a lot of sense to me. Why did Danny blur every time he got a flashback? Was this some psychedelic version of PTSD?

I’ll give this episode, and the show in general, a 3 out of 5. I’d rate it as the lowest of the four Netflix/Defenders shows, but even with that, I thought it was decent and I’d watch another season.

All four heroes will return in the Defenders in August.