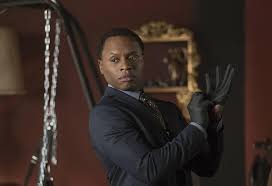 Clive is very out of his element here…

Things start off a bit differently this week on iZombie. We see Major on an op with the Fillmore-Graves mercs. There’s a lot of good action, and Major has definitely picked up some new tricks while he’s been working with them. The mission is a success with minimal losses. After all, zombies only go down from head shots, and those are rare in combat, despite what you see on Walking Dead. And, of course, the bad guys don’t know they’re fighting zombies. Of course, not dying isn’t the same as not getting injured, and that hurts this version of zombies.

Ravi and Liv compare notes about what’s been going on of late when Clive arrives with another case. This one is two weeks old, which Clive inherited when the detective formerly on it went out sick. The victim this time around was a dominatrix, so you know we’re in for a ride when the side effects kick in. By bizarre coincidence, the brain Ravi has been testing his memory serum on is the one from the case. Liv isn’t sure about eating a blue brain, but goes ahead. The effects are kicking in quickly as they go the dominatrix’s dungeon. Clive is baffled by the whole scene, and Liv, channeling the victim, starts rattling off reasons people come to see “her.” They also find a SpyTech remote, suggesting the sessions there are recorded. Liv starts getting visions of some very high profile clients. Ravi’s serum is making the visions longer and more potent. When she snaps out of it, Clive gets in another Game of Thrones reference.

As Major wraps up his mission, he gets a surprise.  Fillmore-Graves is engaging in a kind of unique form of recycling. Major isn’t quite sure what to make of this, but they do make really good use of the sound track here. One Tin Solider does a great job of playing up how odd this scene is.

Liv’s more and more under the effects of Sweet Lady Pain’s brain. It makes for some fun, and some really awkward moments. Clive looks particularly uncomfortable as Liv acts out more. They interview a mayoral candidate, who I guess we’re supposed to recognized but I admit I didn’t. He knows all about zombies, so at least that’s easier. They also end up back with Johnny Frost, the really bizarre weatherman who has been on a few times before and is now a news anchor. Amid all this chaos, we also see Liv abuse a sketch artist and Detective Kavanagh warns Liv and Clive to stay out of his case. Harley Johns, the gun nut, filed a complaint about their visit.

Liv goes to the Filmore-Graves offices and tells them about Harley Johns. Liv gets another of her longer visions, and Vivian, the head of Fillmore, wonders if they need to reboot Liv. That’s one of the better lines of the show, in my opnion. Liv’s visions lead them to a lawyer, who Liv “persuades” to help them out. He confirms a peeping tom who was looking in the window a few times. My two issue with this are 1) Who has a dungeon with a window and 2) If they’re worried about someone looking in, why not just cover the window?

Taking a break from all the major characters, Don E gets some scene time, and we see his grand new venture isn’t working out the way he’d wanted. He’s doing all the work, the thug set to watch over him refuses to help, and he has nowhere near as much control as he had hoped. He ends up out on the street and comparing professional notes with a dealer out there, about prices and Utopium, the designer drug that helped kick off the current zombie problem.

Liv, being out of options, is going through the mug books to see if anything strikes a chord, or another vision. She comments that this is torture and she’s not even enjoying it. Her tedium is interrupted when two of their earlier suspects, Johnny Frost and the lawyer, come in to talk more about the case. Frost, apparently, is being blackmailed,.and he’s now coming in to get help.

The Fillmore-Graves crew shows they are more than just gun thugs. They lure Harley Johns in for an interview, pay him off to keep legal headaches away, and then do something clever. The obvious move would have been to kill him, but they’re smarter than that. It was a good move that will hopefully give them more info in future episodes.

The good guys arrange a sting for the blackmail payoff. Some of it was really nicely done, like Clive’s undercover role. Some of it a bit less so. This isn’t a zombie secret case, why in the world was Ravi part of the op? I like him, but coroners aren’t generally involved in field work for law enforcement. The interrogation is where things really get weird, both from Liv’s ongoing dominatrix brain issues, and from the lamest confession ever. It didn’t make much sense, and they don’t follow up on it. It was like they decided, “Ok, we just need to wrap this plot now.”

At Fillmore-Graves, Major talks with his friend Justin the former DJ about what he saw at the end of the op. Justin doesn’t seem as worried as Major is. That changes when Major’s coughing fit gets bad enough that he collapses. A worried Justin rushes to him, and is very confused when Major tells him to take him to the police morgue. Ravi and Liv spring into action, and then realize they can’t give him the cure because of his wounds from the mission. They’re talking a bit too much, as Justin keeps repeating “There’s a cure?” Liv and Ravi do a temporary measure to give them more time.

Don E has the Scratching Post, the new bar, full of zombies. It’s a rocking party and, in a normal world, would make his business partner happy given the business they’re doing. I’m sure Angus will find some reason to be upset anyway.

The end of the show is really sad. Major finally heals up enough to risk the cure, and there’s a long, slow goodbye with him, Liv, and Ravi. The lurking threat of Major losing his memory is getting to everyone. On the one hand, I get why they didn’t, but on the other hand, I kind of wonder why they didn’t give Peyton, at least, a chance to say goodbye. The episode ends on a slow fade to black.

What I liked: As always, the banter is great. I’d probably listen to this as a podcast with just the characters riffing along the way they do. I like what the Fillmore team did with Johns. Ravi’s memory serum having unexpected side effects worked, and I loved the line about rebooting Liv.

What I didn’t: I’m not sure the purpose was of the Don E scenes. Are they trying to get us to feel bad for him? The window in the dungeon made no sense, as I mentioned above. Neither did Ravi being at the blackmail sting. It was good seeing Frost again, but he wasn’t as engagingly weird as he was in past appearances.