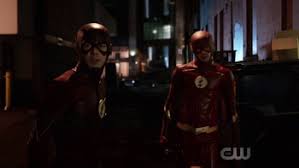 “The Once and Future Flash” proves that, while Barry is quite bright, he doesn’t learn very well. He has endangered his entire reality several times by going to the past and changing things in various ways, like retroactively killing Cisco’s brother, activating Caitlin’s latent Killer Frost powers, or changing the gender of Diggle’s baby over on Arrow. So now, his brilliant idea is to go to the future and learn Savitar’s identity then. I have to admit, since neither Barry nor any of his friends are magicians as far as I know, I’m not entirely sure what learning the villain’s name is going to accomplish. Barry figures out his target is 2024. Iris is worrying about a more immediate future, and makes Barry promise to look out for Joe and Wally if Savitar kills her. He does, although he’s pinning a lot of hope on his “Back to the Future” idea.

This somewhat maudlin talk of the future is interrupted when they get an alarm from STAR Labs. As we saw last time, Caitlin has shifted to her evil form once again, and is rampaging through the lab, while Cisco, HR, and Julian dive for cover. Julian fails to either talk her down or grab her power-damping necklace. Frost hunts the three throughout the lab, doing a really good job of playing the crazy stalker type. Barry finally arrives as Flash, and she tries to kill him, too. At least she doesn’t play favorites. She manages to get away, delaying the others with a wall of ice before she goes out into what appears to be a raging blizzard that I didn’t notice through the windows of Barry and Iris’ loft.

Cisco and Julian bicker over Julian’s role in Caitlin’s current predicament. Barry, for reasons best known only to him and his occasionally obsessive brain, decides this is the perfect time to take his trip to Tomorrow Land. Even Joe, as much as he wants to save Iris, questions the timing of this. But Barry is determined, and works out a way to combine his and Kid-Flash’s powers to propel him where (and when) he wants to go.

Flash gets there and runs into the typical time travel cliche of conveniently blowing newspaper to determine the date. Really, when was the last time you walked down the street and saw a newspaper blowing around? The future doesn’t look great for Central City, with a general air of things being run down. The news gets worse as Flash is confronted by Top and Mirror Master, who beat on him pretty well until he runs away.

Flash runs back to the loft, and the place is trashed. He picks through the debris and then Cisco walks in, looking older and worn. Anyone ever notice the future is almost never a good place for superheroes? Cisco studies the costume for a moment and determines Barry is from 2017, and deduces he wants to know about Savitar. Flash decides that what he needs to do now is quite literally talk to himself, and asks for Cisco’s help to do that.

The future continues to be a dark place (shades of Tiny Tim!) as Barry learns that STAR has been shut down, and Team Flash disbanded, by his future self. STAR is neglected and dirty as they walk through the trashed hallways. Cisco won’t go inside the shuttered building, but asks Barry not to leave without saying goodbye. Barry goes on alone and meets his future self. Future Barry has clearly given up, with unkept hair and a defeated bearing. They argue for a bit, and future Barry is no help at all, giving some unwelcome news about Savitar’s identity. Barry changes from the civilian clothes he’s been wearing (I guess he stole them from himself?) into his costume (where was he keeping that?) and tries to go home, only to find out he can’t.

Cisco isn’t as worried as Barry about the speedster being stuck for a while. Cisco explains that, no matter how much time he spends here, he can return home at the moment he left. Hopefully that works out better for him than for Doctor Who. Cisco then shares some news about what’s happened to him and his powers in the future. It isn’t good. They go to see Julian, who instantly recognizes this is the Flash from the past. Julian’s future revolves around trying to cure Caitlin, who, as Killer Frost, is trapped in a modified cell based on the Pipeline design. Frost taunts Barry about what’s coming for him, and says he should visit Wally.

Suffice to say, there is no good news there, either. Wally’s future is darker than the others. He was broken by some fight he had, alone, against Savitar. One could make the argument Wally is the worst off of the team in this future. Barry leaves, to find Joe tending Iris’ grave. Joe won’t even look at him, never realizing he’s from the past, and tells him to go away. The future is bleak for Team Flash.

Barry goes back to talk to himself some more, now in Well’s old Time Vault at STAR. Future Barry is still defeated and depressed. He even gives himself the exact date of Iris’ death. It’s a really depressing little rant. Cisco talks with “our” Barry, and is saddened to learn that he wants to go back still. We finally learn what happened to prevent Barry from returning to his own time. Barry finally agrees, or is guilted into, sticking around to fix the future and reuniting the team.

Barry speeds around town, gathering up the team. We see what HR has been up to, and I can’t say I’m terribly surprised, although his new business was a twist I didn’t see coming. They are fairly easily persuaded by Barry’s pep talk, and agree to go after Top and Mirror Master. Future Barry is still off sulking somewhere, but the others are all in. “Our” Barry suits up and goes after the two Rogues, and finds himself in trouble. Finally, Future Barry agrees to help, and the two speedsters team up. Future Barry has a costume much more similar to his comic book one than the television show has been to date. The heroes win, the bad guys are beaten, and the news happily reports the first Flash sighting in years. The future team reconciles, and future Barry gives present Barry a hint about how to possibly defeat Savitar… which to me sounds a lot like screwing with the timeline again.

Barry does actually manage to return exactly when he left, leaving Wally at first wondering if Barry had even left. Barry, with a renewed commitment to his friends and teammates, talks to everyone about helping Caitlin and saving Iris. As this goes on, it’s darkly mirrored by Savitar meeting with Caitlin and revealing Savitar’s identity. We don’t see who it is, but a surprised Killer Frost instantly agrees to do whatever Savitar needs.

What I liked: The future Barry’s costume, once he got into action, looked great. I liked it better than both the present Flash’s and a LOT better than the movie version. The future HR made me smile, but he often does, as aggravating as he can be. I liked that, even as bad as things had gotten, Cisco was still devoted to trying to do the right thing.

What I didn’t: I think I’ve had enough dark futures for heroes. This is really getting old, no matter how well it’s done. Even with their powers, I’m not sure I buy Top and Mirror Master managed to dominate the entire city. The future team was a little too easily convinced to get back together (and yes, I realize on some level that at least most of them wanted to).

I’ll give the episode itself a 3 out of 5. I’m very much looking forward to next time, when we supposedly, finally, learn who Savitar is.