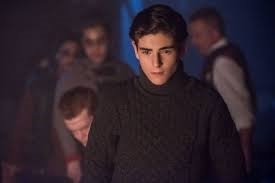 Bruce Wayne is finally coming in to his own

I’m not quite sure what Fox is doing with their shows. Several of them came back from winter break just a few weeks ago, but now seem to be going on another long hiatus. Gotham is among them. I’m not sure if “Mad City: The Gentle Art of Making Enemies” is a season finale, or just another weird mid-season break point. They made a few interesting choices, most of which I liked.

The blackout we saw in last week’s final scene sweeps Gotham City. The cult, or gang, or whatever you care to call them, is rioting all over town. Personally, they remind me a lot of the Jokerz gang from Batman Beyond. Gordon and Bullock try to get a handle on what’s going on, and they are definitely overwhelmed.

Penguin manages to get to the chemical warehouse (never a good place to be in Gotham) during his attempt to rescue Ed Nygma. What he gets is a really nasty surprise. In a recurring theme for the episode, Nygma is really showing a lot of signs of the Riddler to come. He’s got on a green suit, has an elaborate plan, and there’s a death trap that would do a James Bond villain or Wile E. Coyote proud. Nygma leaves, with Penguin in a precarious situation.

Interestingly, the Court of Owls makes a limited return this episode. Catherine, the enigmatic lady who seems to be in charge, looks out over the chaos sweeping the city. She’s not happy about it, and has an odd conversation with a man who doesn’t get named. The man apparently has too much faith in “him,” whoever “him” is.

Bullock and Gordon attempt to map out a strategy, set against the amusing counterpoint of Bullock showing some interesting office telephone skills. Since all this is happening during Penguin’s problems with Ed, no one is in charge down at City Hall, which Bullock says might be a good thing. Gordon finally decides he should go talk to Lee Thompkins and see if her conversation with the returned Jerome gave her any clues.

Gordon finds Lee tending to some wounded officers. She’s less than thrilled to see Gordon, and there’s a lot of snarkiness. She ends up looking like even she thought she might have gone too far this time. She finally remembers that Jerome was fixating on his foiled attempt to kill Bruce Wayne. Gordon rushes off to the Manor, telling Lee to call and warn Alfred. She at least does that much without arguing.

The next scene is one of the oddest and most inexplicable of the show. Bruce and Alfred are handling the blackout, looking for candles and flashlights. The phone rings, presumably with Lee’s call, and Bruce and Alfred stare at it in what looks like dread and even fear. Is there a plot having to do with the phone we haven’t seen? This weirdness is mercifully interrupted when Jerome and company come calling. Alfred handles the threat to Bruce about as well as he ever does: he looks concerned and gets beaten. As the cult members rampage through the study, Bruce plays for time and gets Jerome to agree to at least changing the place of Bruce’s death. Jerome knows Bruce is stalling, but goes along with it anyway. Jerome orders some of the thugs to stay behind and kill Alfred.

While Penguin gets rescued by a reluctant, and even arguably incompetent, savior, Gordon shows to rescue Alfred. They have some nice teamwork as they dispatch the gang members. Alfred’s going to have a lot of cleaning to do when this is all over.

Jerome brings Bruce to some kind of combination circus/amusement park. It’s a very Joker-esque setting, and the gang has some dark, twisted carnie games going. This sickens and horrifies Bruce, as well as filling him what I think you could fairly call righteous rage. Gordon, Alfred, and Bullock figure out where Jerome likely is, and charge off to the rescue again.

I think the next scene is my favorite one. Penguin gets confronted by Tabitha and Butch, who tell him they want his help to kill Nygma. There’s a lot of arguing and taunting before Penguin finally gets punched out by Butch. Tabitha’s reaction to that is priceless.

Bruce and Jerome debate Jerome’s motivations, and what Jerome ends up explaining sounds a lot like the Joker’s scheme from the classic and controversial Killing Joke story. Like the episode before this, I think Jerome is trying a bit too hard, and the writers are trying to include elements from way too many elements of Joker’s history. They also debate the nature of the people of Gotham, and Jerome tortures Bruce with an industrial staple gun. Jerome is surprised by how tough Bruce turns out to be.

The Alfred/Gordon/Bullock contingent arrive as Jerome is setting up for his big act. Jerome is now dressed like a circus ringmaster, and has set up an appropriately flamboyant death for Bruce. For his part, Bruce is really starting to act like the Dark Knight he will eventually become as he frees himself with a combination of nerve, grit, and endurance. While general chaos ensues, Bruce lures Jerome off for a really impressive showdown.

Barbara Keene joins in with the Tabitha/Butch crew in taunting Penguin. She also shows off her very nice legs before Penguin learns another layer of the plot swirling around him. It’s a scene with comedy and some rough emotional conflict. Penguin even gets a revelation about himself.

Bruce comes face to face with his own darkness while he fights Jerome, and once more strongly shows the man he’ll grow to be. Bruce wins, and is reunited with Alfred. Jerome comes staggering after them like the bad guy in a slasher movie, and Gordon intervenes. That fight ends with the most amazing look on Gordon’s face.

The show winds down with Bruce and Alfred in their kitchen. Alfred patches up Bruce and they talk about where his training is heading. Nygma has a climactic showdown with Penguin. We finally learn who the man is Catherine of the Owls has been talking to is, and it’s going to be a nasty shock to one of our heroes.

What I liked: While Gordon has been the focus of much of the series, they backed off that a bit for this episode, to give Bruce the spotlight he needed for the episode. Gordon did get some great looks. The Nygma/Barbara/Tabita/Butch plot was nicely done with some great lines and reactions. Penguin learned a bit more about himself. I think Bruce has a major foreshadowing moment when Jerome comments that Gotham doesn’t have heroes.

What I didn’t: It really felt like the Jerome and cult bit was belabored and they just tried too hard. Bruce and Alfred’s apparent horror at the phone ringing made no sense at all.

I think this was one of their better episodes overall. I really liked the foreshadowing for Bruce and Ed Nygma’s futures. I’m going to give this a 4 out of 5. I’m not sure why the show is going on break again, but it’ll be interesting to see what happens in the wake of all this.

Taking the week off: They squeezed in almost everyone. Aside from a few minor characters like Ivy and Falcone, the only notable absence was Selena, but that makes sense. She went through a lot during her mother’s return.