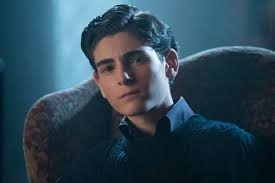 I can finally almost believe he becomes Batman…

Things continue to get strange in Gotham, as seen on “Mad City: Smile Like You Mean It.” The episode draws on several different elements from various points in the Joker’s career, presumably to convince us that this Jerome is supposed to eventually be the Joker. His cult is a lot like the Jokerz gang as seen in Batman Beyond. Jerome’s general mannerisms are certainly of the utterly insane variety, a crucial part of Joker’s makeup, and one lacking in many recent portrayals of the character. Even his face being cut off was something that happened during the DCNU comics in the last several years.

The major plot this week is Jerome’s return, aided by his weird cult, led by wanna-be Dwight. Dwight showed up last week, and wasn’t really impressive. He leads his rabble into a storehouse to steal Jerome’s body, in the process giving a hint as to how far their influence reaches. I really don’t get why that’s something anyone thinks would be good to join. Then again, a lot of people who join cults aren’t noted for making the best decisions.

GCPD, as ever represented by Jim Gordon and Harvey Bullock, show up to the storehouse. They find a lot of the leftovers from Indian Hill, the gift that keeps on giving. Jerome’s body is gone, but the cult left another one behind, I guess as some kind of exchange program. They also left one of their wounded, which shows you how much they care about their members.

In the first of many questionable decisions, Gordon brings the wounded thug back to GCPD, denying him medical care. Or at least hospital care, as Lee Thompkins agrees to patch him up. She’s been going through a lot of changes, and has emerged a lot darker, which we see in this episode. She complains about the goon not being in the hospital, but helps Gordon and Bullock keep him there, in between sniping at Gordon. She even helps interrogate him later. The thug not only knows who Gordon is, but goes disturbingly fan boy about meeting him, inadvertently giving a clue about what the cops should be looking for.

Out at Wayne Manor, one of the two subplots of the week moves along. Cole, the mysterious man who is threatening Maria Kyle, comes to see Bruce and Alfred. He demands a lot of money, citing some mysterious job she was supposed to do and failed to complete. He’s even slick enough to not threaten Maria, instead saying he’ll go to the cops and give them enough to send Maria to prison for years. Clever, since, while the extortion is illegal, talking to the police isn’t, giving Cole a stronger bargaining position.

Dwight is happily playing mad scientist ala Victor Frankenstein. He hums to himself as he tries to revive Jerome with a lot of equipment that sparks and buzzes. Dwight, along with almost everyone associated with this group, spend way too much time laughing in a forced, maniacal way. We get it. They’re supposed to be nuts. Maybe find another way to show us that?

The other subplot du jour finds Barbara, sitting by Penguin’s couch, reading to him from the paper. Penguin got a lot of bad press following his disastrous television interview. With Nygma missing and Deputy Chief of Staff Tarquin dead (although the press hasn’t found out about that yet), Cobblepot’s administration looks really bad. Barbara prods Penguin into action, making a great comment about his “disco vampire” hair. Barbara, in small doses, really does a lot to perk up an episode.

Team Bruce meets over a case full of money. I started having some suspicions about what was up during this scene, partially from how Maria is acting. Selena thinks paying Cole off is a big mistake, and makes a decent case for her point of view. Naturally, everyone ignores her, sending Maria off with a briefcase full of cash because what could possibly go wrong with that in Gotham? An understandably annoyed Selena stalks out.

With some actual detective work, Gordon and Bullock, with technical advice from Lucius Fox, figure out where the gang might be hiding out, or at least doing some of their work. This scene showed that Fox is a smart man in knowing his place in the scheme of things. It also showed that the cult has a cop under their sway. I really wonder how many of the GCPD only work for the GCPD. It can’t be many. Every other one of them is corrupt, working for a crime boss, or some other secret organization.

Dwight gets increasingly desperate as his resurrection efforts aren’t working. A fellow cult member comes in, panicking, saying the police are outside. Dwight reacts in standard crazy villain form to the bad news. Then he gets weirdly creative and comes up with a new look for himself, fleeing just as the police arrive. He then tries a new tactic with the Crazy Cult and manages to persuade them to go along with him for a while. I really wanted someone in here to start singing “Put On A Happy Face…”

After a quick scene setting up Lee for a nasty surprise involving Jerome’s cut up corpse, Fox tells Gordon and Bullock that he found a cell phone at the crime scene. Someone from the precinct warned the cult, which was amazingly stupid. We’ve seen they have cell phones. Why would he use an easily traceable landline? Gordon runs a great bluff to flush out the traitor.

Penguin goes to Sirens for what’s supposed to be a meeting with his crime bosses, but no one shows up. He rants at Barbara that she’s trying to manipulate him. Things get clever here, with a series of phone calls, threats, and a great undermining of Penguin’s grip on reality. Tabitha also makes an appearance, showing how much she enjoys the simple things, like homicide. The plot against Penguin is really pretty clever.

Bullock and Gordon question the traitorous officer. Good cop/bad cop doesn’t really work, and bad cop/worse cop doesn’t seem to be getting the job done, but bad cops/bitter medical examiner gets some results. There’s also another very tense scene with Lee and Gordon. I’m betting the Human Resources Manual doesn’t cover how to deal with coworkers that shoot your spouse.

Acting on the information from the cult member/cop, Gordon warns a local tv station that they’re on the hit list. They have a meeting about it which ends in gunfire and bloodshed as they are too damn slow. The police rush off to the station, leaving Lee with the not-quite-as-dead-as-he-seemed Jerome. I swear, if someone dies in Gotham at this point, you should stake them in the heart and cut off the head before tossing them in a fire just on principle.

Jerome and Lee have a very entertaining scene, probably the best of the week. Jerome’s random insanity isn’t making a dent in Lee’s new dark attitude, and listening to him getting caught up on events in the city since his death really highlights how ridiculous some of this has gotten. I’m kind of curious as to where Jerome got the gun from that he casually threatens Lee with throughout the scene, and she pretty much ignores.

The Maria/Cole/Selena plot comes to a dramatic conclusion. Well, an annoying one, anyway. There is betrayal and tears and threats and drawn knives. Suffice to say I think this storyline will be disappearing from the show for a while at least. It does have an epilog a bit later.

Jim talks briefly with cult leader Dwight, who tries to reenact Jerome’s conflict with Gordon last time he was seen. Jim apparently doesn’t like reruns. The cops rush the tv station, and get in through a ridiculously oversize air vent. They don’t even have to do the Die Hard duct crawl, just squat a bit. Really, who designed these buildings?

As the cops and cult play shoot-em-up, Barbara and Tabitha put the next phase of their plan into motion. They acknowledge Ed Nygma is really good at this, even though they agree they need to kill him later. As they thin out the crime boss population in Gotham, Nygma does his next step. Penguin is being lured to another location, and I can’t imagine Ed’s planning a surprise party for him. Or at least not one anyone would want.

In the chaos of the gun battle at the tv station, Jerome slips in, kidnaps Dwight, and sneaks away. He makes a televised speech, gives Dwight his just rewards for his hard work, and then pulls a stunt I suspect is going to make next week’s episode particularly dark.

Selena returns to Bruce’s home as he trains on a heavy bag. She’s furious about what happened before, and accuses him of keeping secrets. He does point out he was in a bad position, but she’s not in a mood to listen. Raging, she attacks. Impressively, Bruce blocks or evades her strikes. He’s learning. Finally. She leaves, and I doubt they’re heading out on a date anytime soon.

What I liked: Bruce was acting more Batman-like this episode, and I don’t mean just the fight, although that was impressive too. The Nygma/Barbara/Tabitha plot is really well-executed. The Jerome/Lee scene was darkly entertaining. I liked Fox’s assessment of his place in combat.

What I didn’t: I don’t like Jerome as proto-Joker. I really don’t like Dwight. The crazed laughter was overdone by about everyone and was getting old. I saw the conclusion of the Maria/Cole mess coming, and it wasn’t all that well done. They tried too hard to bring in too many parts of the Joker mythos.

Taking the week off were semi-regulars Ivy and Butch. I still don’t think they know what to do with older Ivy.