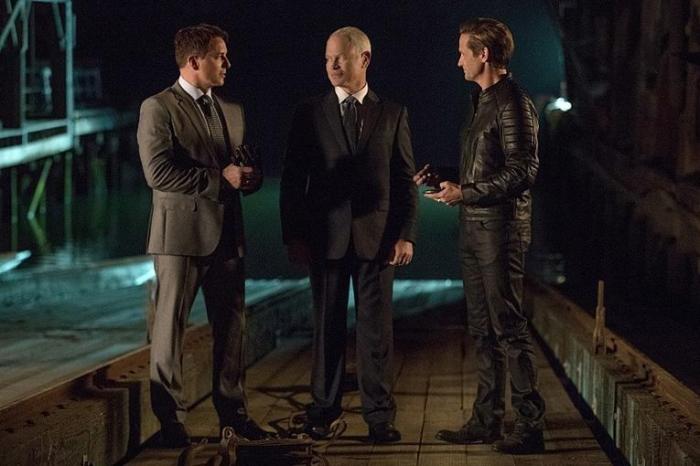 The Three Stooges… err, Legion of Doom… have a meeting

Taking its turn in the winter finale line up, the Legends of Tomorrow are stuck dealing with things “The Chicago Way.” Vixen gets her turn at the opening voice-over. I still wonder how asking to be called Legends is better than being called a hero. As one of the characters commented during the big crossover, it sounds really egotistical to me.

The show opens with men in long coats and Tommy guns walking down a rainy city street. Al Capone and his thugs are less than impressed at Damian Darhk and Eobard Thawne’s offer to work with them, especially given that Thawne is still in costume. A brief display of superspeed changes his mind, and we also learn that Malcolm Merlyn is now working with them. Thawne and Darhk are both entertainingly bored by Capone’s threats.

On the Waverider, Steel and Atom are sparring, and talking about Cisco’s mods to Ray’s suit. Their sparring gets a bit out of hand and attracts the attention of Jax and Sara. Sara is not only leader, she’s playing den mother in this scene and it’s kind of amusing. She tries to explain sibling rivalry to only child Jax after they leave.

In the library, Stein is mooning over pictures of his recently discovered daughter. He and Jax talk about her being a time aberration. Jax urges Stein to at least tell Sara about Lily, but Stein is being very protective of his daughter. He’s gaining new memories every day, which has to be confusing. In addition to being worried about changes to the time line, Jax points out that Gideon or Nate is bound to notice the alteration.

This week’s crisis comes into play when time disruptions are detected in 1927 Chicago. The papers are now showing Al Capone as mayor, which can’t be a good thing. There are a lot of jokes throughout the episode about Kevin Costner’s Untouchables movie. Rory has mixed feelings about the trip, first learning about Prohibition, then what Chicago was like under Capone. Vixen is excited to go there, talking about reading her mother’s magazines of the era. In rural Africa? I think the writers keep forgetting where and when this version of Vixen is supposed to be from. There are a few other comments about her past that don’t seem right this episode.

Ray naively loses Special Agent Elliot Ness to the corrupt Chicago police, not realizing how far Capone’s reach extends. Stein lets the bad cops get right past him as he gets distracted by new memories of Lily. Sara’s mad about this, although what Stein was supposed to do alone, I’m not sure. He’s not a fighter and Jax wasn’t there so he couldn’t become Firestorm. The team regroups back on the ship. They spend a lot of time around a hexagonal control panel I don’t remember seeing before, and it reminds me a lot of the central console of the TARDIS. I wonder if that’s a nod to Arthur Darvil’s past or time travel shows in general?

Capone’s men bring Ness to the docks to get rid of him. This was apparently a habit of Capone’s, and that lets the Legends get there just in time. Vixen rescues Ness from drowning thanks to her amulet powers. I also learned something this episode. I thought cinderblocks were a much more recent invention, but, researching this review, I learned they date to the 1880’s or so. So Legends of Tomorrow taught me something. We also see Darhk report that they took the bait, which can’t be anything good for our heroes.

Ness has some brain damage from his extended trip underwater, which leads to Gideon treating him and jokes about Rory. With Ness out of commission, Ray and Nate are going to go play undercover G-men. Somehow that’s not the pair I’d send off together, but given the era, they really do have limited choices.

With the team scattered, we get a lot of quick scenes. Nate and Ray meet up with the Feds while Stein, Jax, and Sara try to infiltrate one of Capone’s clubs. They are very unclear about how speakeasys work. Weirdly, Sara has the best handle on it, while Stein ends up being comic relief. Rory and Vixen are left on the ship. They sort of bond a bit, which is odd considering their respective backgrounds, and then Rory gets a visit from… Snart? This happens a few times, and I’m not entirely clear what’s happening. The simple explanation is that Rory is seeing things and/or feeling guilty about making new friends. But given the nature of the show, there could be several other things going on, like some kind of time echo, or even an earlier version of Snart. It’s in character, but frustrating, that Rory never thinks to ask Gideon of there’s anyone else on the ship.

Things go badly at the club, where Sara, Stein, and Jax get caught between the Federal raid being led by Nate and Ray, and the suddenly appearing Darhk/Thawne team. Thawne shows he’s smart, with his first high-speed moves being preventing Stein and Jax from merging. I guess Thawne’s done some research. By the end of the scene, Sara and Stein have been captured. I guess it’s a bad day to have your name start with “S”.

The team regroups on the ship, trying to figure out what to do next. Jax tells them about the hidden armory, now that they aren’t keeping future Barry’s message a secret anymore. Jax thinks he found an anti-speedster gun. Rory says there’s nothing you can do about speedsters, a nice nod to his past as one of Flash’s Rogues. Rory also takes control of the squabbling crew and says if they’re going to take Capone, they need to do it Rory’s way: think like criminals.

Our captured S’s are in some kind of warehouse or storage space. This is another one of the scenes I have an issue with this week. I don’t have an issue with Sara being captured– she’s a normal taken down by a speedster, that works. But someone trained by the League of Assassins can’t get out of ropes? Really? She and Malcolm end up debating the merits of changing history as he tries to tempt her over to their side. As Sara righteously claims that she’d never play with the timeline for her own benefit, Stein looks guilty. She then unknowingly twists the knife saying she’s learned a lot from him. So far, both have resisted giving any information about the amulet they captured from Thawne a while ago.

Rory’s way that he mentioned earlier involves hijacking some of Capone’s shipments. He and Vixen call themselves Bonnie and Clyde, continuing the running joke of borrowing names from the future. In addition to annoying Capone, this gets them the address they are delivering the goods to, which is also hopefully where Sara and Stein are.

Speaking of the prisoners, Stein finally tells Sara about Lily. She’s understandably not happy to hear this. Darhk shows up to do some gloating and threatening. He raises the excellent point that there’s probably no use in torturing someone who is one of the League of Assassins’ best. A physics professor, on the other hand…

The rescue mission is not going as smoothly as it could, in part because Ray and Nate keep bickering. A few people, myself included, have commented that Ray and Nate are a lot alike. In addition to overlapping story issues, that does mean they might not get along too well. There’s something really wrong when Mick Rory is the one who points out they need teamwork. For that matter, it’s the second time in a row, because he did roughly the same thing during the big crossover. They manage to get Sara and Stein out, although Stein is feeling the effects of Thawne torturing him. They confront Capone on the way out, which seems a bit too easy. Darhk reveals this was some kind of set up. Mick has another hallucination, if that’s what they are, of Snart.

Back on the ship, Stein is way off. A few people note this while Rory has a conversation with Vixen and with his potentially imaginary friend. The team gradually figures out what’s going on, as we see that Stein is actually Thawne. I guess he’s using some variation of whatever it was that let him impersonate Harrison Wells in the first season of Flash. Thawne lets his allies on board, and there’s a lot of chaos as Malcolm fights Sara, Jax tries to use his gadget on Thawne with mixed results, and the rest deal with Capone’s thugs. Oddly, Thawne suddenly retreats when some kind of alarm goes off on his wrist. I wonder what he’s running from. Time wraiths?

The 20’s part of the adventure wraps up when Stein is rescued after Sara gives the bad guys the amulet they’ve been searching for. She says that the team is family, and that includes Stein’s daughter Lily. Stein is surprised and touched. Mick has another chat with Snart and then Vixen. I hope they’re not going for a love story with Vixen and Rory, but the friendship is amusing.

Elsewhere, the bad guys use the amulet to make a map. Apparently, Thawne is after the Spear of Destiny. In Christian lore, it’s the spear that stabbed Christ on the cross. In DC Comics history, it was the excuse for none of the heroes getting more involved in World War II, as it erected a barrier that made any super with magic powers, or magic vulnerabilities, fall under Hitler’s sway if they went to Axis territory. Now, Thawne is claiming it will let them rewrite reality. Thawne avoids questions about why he’s suddenly in such a hurry to leave the 20’s. but apparently the next step in their plan is Rip Hunter. We get a scene hinting at what happened to Rip, finally, and it’s a really strange one .

What I liked: I don’t care what this version of Snart actually is, it’s great to see him again. Wentworth Miller’s portrayal of Captain Cold was one of my favorite parts of the show. Thawne’s group is getting more dangerous, and the Spear of Destiny is an interesting endgame. I’m glad Stein told Sara about Lily. I think that means the only secret on the team is Rory’s visitations from Snart.

What I didn’t: Sara not being able to get out of ropes just doesn’t make sense. I’m not sure Mick ever actually used his heat gun, and I still don’t know what happened to Snart’s cold gun. Nate and Ray need to stop acting like kids.

It was a good episode. Thawne’s team is really coming together. I’ll give it a 4 out of 5. I’m really curious about the Rip scene.