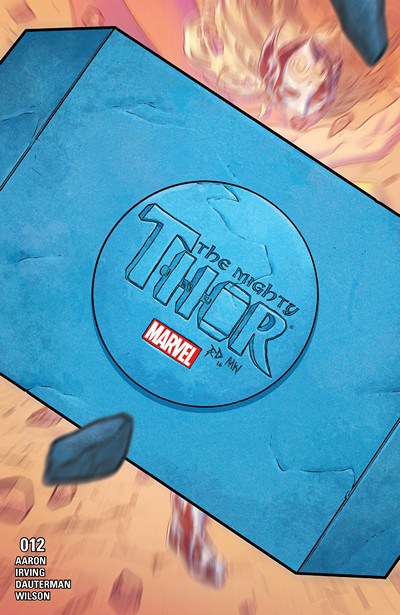 Since Jane Foster took up Mjolnir, it’s been acting a lot differently than for anyone else who has wielded it. Last issue, it even helped keep her secret identity, much to the confusion of a few rabid SHIELD agents. This issue goes back and tells the origin of Thor’s hammer. In the past, there’s just been a passing reference to the dwarves of Nidavellir forging the hammer from mystic uru and that’s been about it.

Here, Jane visits the Halls of All-Knowing, a place we saw the… previous? Original? Thor visit several times. With some help from the long-suffering librarian, she learns about Mjonlir’s history. There’s a lot more to it, although they don’t really explain why the hammer is acting so differently for Jane than ever before. The new history doesn’t really conflict with anything we’ve heard in the past, which is some very skilled writing by Aaron. I really enjoyed this issue, and recommend it to Thor fans.

Plot: I thought this was a really well done issue, which is almost redundant with Jason Aaron’s writing. I’ve liked everything of his I’ve run across so far. This was a nicely one retelling and expanding of something that, until recently, had always been a key part of Thor mythos that was really light on details. I’ll give the plot a 4 out of 5.

Art: The art is nicely expressive, and they change the talent from the modern era to the historic era. That really emphasizes how long ago this is supposed to have been. I’ll give the art, too, a 4 out of 5.

Positives: I like this addition to Thor’s history. The art is great, and Odin being so amazingly egotistical, and yet powerful enough to back it up, is consistent with how Aaron’s been writing him the last few yeas.

Negatives: Very few. I would have liked an explanation about why Mjonlir is so different for Jane. This almost seems like a filler issue, however well written it is.

I’ve been enjoying Aaron’s take on Thor since he took over the character. This is another really well done issue.