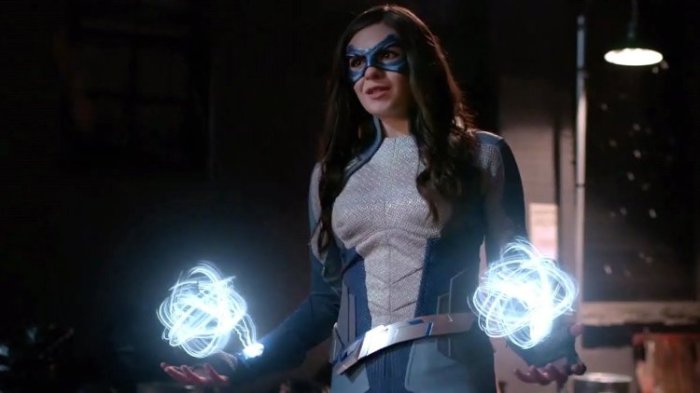 Behold the power of my energy phone cords!

Supergirl hasn’t been shy about addressing social issues. Among their firsts were introducing Nia Nal/Dreamer, the first trans superhero in live action. Her story is a big part of this week’s episode, along with some problems with Obsidian Tech’s VR Platinum world. They manage to address both of those major plotlines with the title, “Reality Bytes.”

The show opens with a flashback from two months ago, as someone we’ve never seen before goes walking in a winter wonderland that gets a lot less wonderful as time passes. To no real surprise, this turns out to be a scene in Obsidian Platinum. What is a surprise is that certain important things aren’t working right. When he finally gets back to the real world, Kelly is concerned about what he reports and we see a familiar and sinister face lurking around. Back in the present, Supergirl and Dreamer team up to take down a stray Dominator that is roaming National City for some reason or other. Dreamer gets in some good banter about Kara’s upcoming date, and then has an awkward scene as Director Dox shows up to take custody of the defeated alien.

Flying home, Supergirl meets up with Alex to discuss date options and nerves. Apparently it’s been a while for Kara. The news covers Lex being a pitchman for Obsidian Tech, and Alex admits she misses her job at the DEO. Alex tries to show off her weapon from J’Onn, but has some problems and engages in some ill-advised horseplay which no one with any weapons training would actually do. At home, Nia talks with Yvette, her roomie, about dating and getting over “that weird little man.” This ends with Yvette deciding to bring Nia along to meet her online boyfriend. Nia is understandably bemused by Yvette’s claim to be best friends with Dreamer.

Date night plays out in two very different ways. Kara plays pool shark with William, which seems a bit odd. Pool isn’t a superpower, and we’ve never seen her play or heard mention of it before. At a very different place, Nia gets a weird vision and goes to the bathroom to be alone and try and work out what it meant. This leaves Yvette on her own, and we find out the entire night was a setup for a rabidly anti-trans guy to attack Yvette and leave a nasty message for her “best friend” Dreamer. After dealing with cops and getting Yvette settled, Nia gets a visit from Kara, who is very upset about what happened. She gets even more worried when Nia declares her intention to go after the thug in a very non-Superfriends way. Kara tries to talk her down but only gets an agreement to wait a few hours. There’s no police force in the world that’s going to close a case like this in that time frame, which both Kara and Nia should know.

Alex and J’Onn spar, showcasing J’Onn’s shapeshifting and Alex’s inability to get a handle on her new toy. He gives her some advice she doesn’t really want to hear, but the discussion gets interrupted by someone coming in to J’Onn’s PI office, which I guess is still in business after all. Enter Al, a concerned alien whose brother has disappeared after getting a special invitation to a restricted part of Obsidian in their Virtual Vegas. The police aren’t too interested, thinking he’s off on a “VR binge,” so Al came to J’Onn. J’Onn will try and run down some leads in the real world while Alex uses her connection to Kelly to gain access to Virtual Vegas. This kind of seems like Alex is taking advantage to me, but Kelly says she’s happy to help.

At the DEO, Dox, who seems to have not inherited the office that goes with the directorship, moons over Dreamer in footage of her earlier fight. I’m not sure where the footage came from, as there didn’t seem to be any cameras at that fight. Kara calls, brings him up to date on what happened with Yvette and asks for help. Dox, of course, agrees, badly covering his ongoing interest in Dreamer. Alex talks to Kelly about Trevor, the missing man. After some warnings and instructions, Kelly sends Alex in to Obsidian. After some interesting distractions during the log in process, Alex gets to Vegas, roughly as it was in the 60’s. Kelly continues her over-the-coms tutorial, and Alex eventually gets pointed to a very creepy building. Her DEO uniform doesn’t exactly blend in to the 60’s vibe, but no one comments on it. In the real world, J’Onn uses his psychometry power (which I don’t remember him having) to try and track down Trevor. The scene also gets in a slight dig at modern technology replacing some traditional things.

Getting in to the spooky building, Alex looks around and finds a nightmare scenario that triggers some of her own bad memories. Kelly talks her through what she’s seeing, and Alex rescues some trapped people, which gives us some cool special effects reminding us this is the virtual world. Kelly is troubled by something that calls back to the opening scene as Alex gets some information about the missing Trevor. She learns about a new player, Richard, who seems to have a lot to do with what’s going on. His real world location is just outside Opal City (comic book home of Starman), and J’Onn goes to investigate. Nia decides she’s waited long enough, although it does sound like the detective is still working the case, and takes unilateral action.

J’Onn starts putting some pieces together out in Opal, and begins to at least work out the motive behind what’s going on. Dox, appropriating DEO resources, has agents working on some research, and gets a truly staggering amount of information on anti-trans hate groups. He also sees something else online that worries him. Kelly has worries of her own about unexpected uses of Obsidian Tech, and gives Alex some advice that makes no sense at all, but works, making me think the writers don’t have a firm grasp on what VR actually is or how it works. At CatCo, William and Kara read an article that seems to be about Yvette’s case, although the criminal hasn’t been identified yet. It seems like this scene should have been shown later in the episode. Dox shares some of what he’s learned with Kara, who ducks out of work once again. She’s lucky Andrea isn’t in this episode.

While Nia enacts her own plan, Alex finally finds Trevor, or at least where he is in Obsidian’s world. Why you can’t just trace his location like an IP address is never addressed. Trevor’s in a nasty situation that Alex talks him through with the stuff she learned from Kelly that shouldn’t work but does. He gives his real world location so they can send medics and a team to get  him out of VR. Again, why they can’t just disconnect his account is never explained. Richard the bad guy shows up and Alex defeats him with more “Wait, how does that work?” stuff. Even Kelly is taken aback by these developments. Back in the real world, Dreamer has a showdown with the vile assaulter. She almost goes too far when Supergirl, magically knowing where she is, shows up to talk her down. Dreamer ends up listening after giving the bully a beating and a threatening parting line. Later, Nia has a breakdown on the balcony at work, and Kara has a heart to heart with her. Nia’s been going through a lot, and needs to have a talk with someone. Alex and Kelly have a chat, ironing out some agreements about what’s allowed or not in VR and some disturbing issues about Obsidian. Trever shows up in person to thank Alex for the rescue.

Nia has a big talk with Yvette about the trans community and what they need to do to protect themselves and not give in to the abusers and haters. Brainy visits the detective who was working this case with a mountain of evidence about hate groups, explaining it away as the DEO’s interest in allied heroes. In another sparring match, Alex continues to not get the hang of her new weapon. J’Onn calls the session off early, but before Alex can get too upset about this, she gets a shocking phone call, and rushes over to Kara’s to share the news. The episode ends with some hints that Leviathan is behind some recurring problems.

What I liked: The writers are not at all shy about using their platform to speak up for what they believe in. While they get preachy on occasion, they don’t here, and I’m glad they are getting this message out. Nicole Mains, who plays Dreamer/Nia, is very involved in trans-rights issues, and I’m sure she is glad to put this issue front and center. It was nice to see J’Onn using his investigative skills, as opposed to just his powers. Opal City keeps popping up, and I wonder if any of the Starman characters might make an appearance. Then again, with the new Stargirl series coming, maybe not.

What I didn’t: I really think the writers don’t have a handle on how VR works. It doesn’t “bend to your will.” Comic book science at its finest, I guess. It feels like they are drawing out Alex’s weapons problem a bit too much. Several of the ongoing issues could be resolved with some of these people actually talking to each other. While the character is loathsome, Jon Cryer’s Lex Luthor has really become a huge part of the show, and his and Lena’s absences were noteworthy. I’m not loving the Kara/William pairing. Bring back Mon-El!