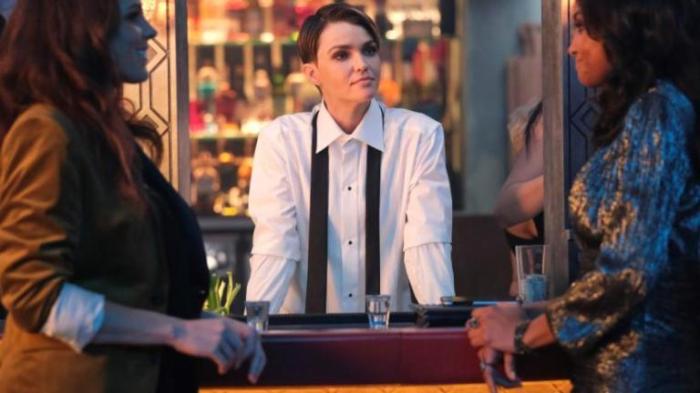 After the Crisis, and then the strangeness of the Alice/Beth affair, Batwoman and company could use a change of pace. “Normal” doesn’t really apply in Gotham most of the time, but something with lower stakes and less emotionally wrenching at least would be good for the heroes. We do get something a bit different this week, and still work in a Wonderland reference for the title: “Drink Me.”

The show opens with what’s essentially a red shirt showing us how the villain of the week works. I suppose as far as Gotham villains stand, it’s not a bad way to go, but we clearly see that Batwoman’s help is needed. The next day, at Kate’s office that never seems to do anything aside from be a location for conversations, Kate, Luke, and Mary talk about what they all just went through with Beth’s unexpected death. Well, mostly Luke and Mary talk, while Kate indulges in the Bat/Wayne family tradition of brooding. They discuss that, since Beth died, the Crows are no longer looking for Alice, which they should do something about. What I think is a bit odd is that, while the fact that no one knows who killed “Alice” is remarked on several times, no one seems to be looking particularly hard for the unknown killer. None of the three are feeling very good about what’s happened.

Based on evidence revealed last episode, Commander Jacob Kane gets released from prison (I won’t rant about everything they did wrong there again), deals with a crowd of reporters, and visits the morgue with Sophie. I have a few questions about how that all spun out, but it certainly shows how Jacob feels about his “late” daughter. Jacob presses Sophie with questions about Beth’s death, and we see some flashbacks to Sophie and Batwoman talking.

Speaking of Alice, she’s off talking to herself in a room full of mannequins, worried about her missing Mouse. Alice gets some bad and unexpected news, while Luke brings Kate a memento. Luke points out that Kate could use a distraction, that Gotham abounds in opportunities for masked vigilantes, and presents her with a suggestion on what to look into next: our opening scene killer, who has been dubbed “Nocturna,” and is getting a lot of vampire comparisons. Nocturna was a Batman foe in the ‘80’s, clashing with the Tim Drake Robin and Spoiler. Amusingly, Kayla Ewell, who plays Nocturna in this episode, also used to be on the Vampire Dairies. Luke and Kate’s discussion includes obscure clubs and vampire slaying.

Following up on Luke’s clues, Batwoman does a rooftop stakeout and then finds the latest of Nocturna’s victims. This leads to the obligatory first clash of villain and hero, with a lot of banter and some interesting overtones. Batwoman, possibly still shaken by last episode’s tragic events, is really sloppy and manages to lose the fight and get herself in all kinds of trouble. Nocturna gets away, Luke’s ear-bud advice isn’t much help, and Sophie takes a chance as she arrives at the head of a squad of Crows. Drained by the experience, Kate pays a visit to Mary’s clinic for some bumbling excuses and a pick-me-up. To me, this episode is showing that Batwoman needs both her own Alfred and a Robin (in the comics, she frequently works with Flamebird). Mary gets some interesting results on Kate’s checkup, which will be important later.

Back in the cave, Luke and Kate have some banter about her run-in with Nocturna, with Luke being oddly squeamish. The recently-released Commander Kane talks to the Crows, and reveals some interesting insights about his own character. Kane and Sophie look at Mary’s Instagram page after the talk, and Sophie gets a new assignment she didn’t really want. Several plotlines run into each other at The Hold Up, Kate’s bar (I thought she was in real estate?). Nocturna’s on the prowl, Sophie’s looking amazing, Mary’s playing in to her vapid socialite cover, and Kate’s not happy. Luke makes some amusing comments and interesting fashion choices. Lots of things swirl through the air, including some interesting hints of things between various characters.

At the Crows’ Nest (I’m going to keep calling it that until someone official names it), Jacob gets some disturbing information from a loyal employee. Back at the bar, there are a lot of strange conversations that don’t go quite the way anyone planned. Because Kate can’t have a simple night of just trying to bring down a serial killer, Alice pops up to complicate things. The two sisters have an ugly conversation, with Alice accusing Kate of something she didn’t do, and a lot of recrimination over recent decisions. I’d say any hope for an eventual reconciliation between the two is pretty much out the window.

They never come out and say it, and actually imply the opposite, but I think Nocturna has more going on than it seems, since earlier she beat Batwoman and now somehow not only knows where Alice is, but gets the drop on her. Our two formidable leading ladies are really not doing well this episode. Luke and Kate bicker a bit as they narrow their suspect list, and finally arrive at a likely prospect. Alice, finding herself in dire straits, does some wheeling and dealing to save herself. While Sophie has a bad night at work, Mary has a worse one after being a good Samaritan, and Alice and Batwoman cross paths again under surprising circumstances. They have another tense conversation before Batwoman goes charging off to help someone else.

In their next confrontation, Batwoman once again doesn’t do to well against Nocturna, and gets some very unexpected help from a surprising quarter. It’s an odd fight with some weird choices around it. Sophie finishes her rough time at the office by being handed an ultimatum. After the big action gets resolved, Kate pays a call on Mary, who is amusingly chirpy as she recovers from a hard night. Kate learns something that troubles her and leaves quickly. In a recurring theme, Kate once again has a nasty conversation with Alice, and there are a few different surprises, especially some of what Alice says. Alone and upset, Alice gets some intel from one of her henchmen that clears up something she’s been worried about.

Another commentary from Vesper Fairchild starts the wrap-up events. Vesper talks about Nocturna’s capture, making a few jokes along the way. Mary shows why you really don’t want to underestimate smart people who have time to think. And, making things more complicated still, Batwoman and Sophie have a rooftop meeting that goes very differently than any of the ones between Batman and Commissioner Gordon (where is he in this timeline, anyway?).

What I liked: Mary gets some great scenes, and remains my favorite character at this point, followed closely this week by Luke. Some of Nocturna’s scenes were really well done, too. I can’t say I like him, but I understand Jacob Kane’s decision this episode. His attitude about Batwoman really doesn’t speak well of him, though.

What I didn’t: Nocturna does unexpectedly well in her encounters with both Batwoman and Alice. A few of the fights had some bits in them I didn’t really follow. I was hoping the story with Beth would get rid of some of the sister drama with Kate and Alice, but now Alice seems to have taken on a new part in this.

It was a great deal better than last episode, but that doesn’t say much. I’ll give this one a 3 out of 5.