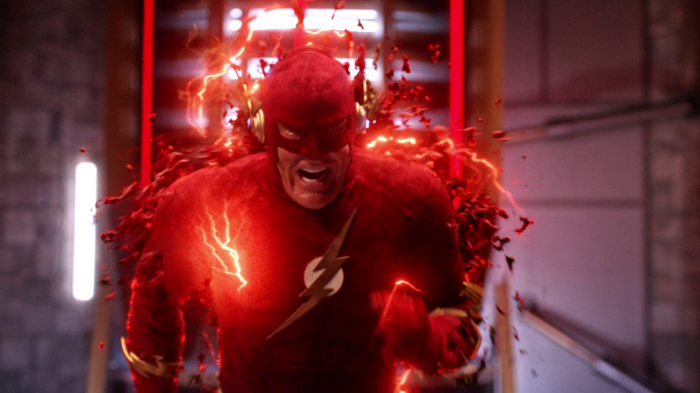 The Crisis on Infinite Earths keeps going, claiming more aspects of DC’s past as the remaining heroes try and assemble the Paragons the Monitor says are so vital. They’ve taken some losses, and are making some questionable choices in the wake of the tragedies. Can the assembled heroes and allies beat the Anti-Monitor and the all-consuming waves of antimatter? It’s not looking great on the Flash episode of the crossover, and there’s more tragedy to come. Since this is the major break-point between sections of the story, there might be some spoilers below.

The cameos and deaths roll on as we find out Earth 203 was home to the short-lived Birds of Prey series, and Huntress gets one last run along the rooftops and com-call with Oracle before their world ends. The third main character on that show was played by the actress who is Alice on Batwoman, so I can see why they didn’t work her in. Aboard the Waverider, Ray is working with a new gadget to help find the Paragons as Team Flash breaches in. Ray immediately drafts fellow-genius Cisco for his project as the others catch up. Ralph makes a quip about “Holy All Star Squadron!” both paying homage to Burt Ward’s Robin (killed in the first episode) and the DC title All Star Squadron, a collection of Golden Age heroes. They fire up the device and we learn who the remaining Paragons are, including Ryan Choi. In the comics, Ryan succeeded Ray Palmer as the Atom, and with Brandon Routh leaving Legends of Tomorrow, it’s an interesting choice. Diggle and Sara argue about the Lazarus Pit plan, and Cisco really has an issue with the Anti-Monitor’s name.

While we find out someone else is missing, we see some fractures in the unity of the heroes, as there’s a lot of disagreement about some “side quests,” to use the gaming term. Cisco gets forced into a major change, which he’s not happy with at all. Pariah pops up, and shares his tale, and Cisco grouses on the loss of one of his usual duties. Between them, they manage to open a door to a hidden chamber and learn some important things. Supergirl and Batwoman consult with Lex, which is a sure sign things are going really, really badly. Constantine, Diggle, and Mia continue their own mission, and end up on yet another Earth for another fantastic cameo: Lucifer, from the show of the same name, providing the heroes with something they need to get where they have to be. Interestingly, Lucifer and Constantine apparently have a shared past, which even surprised the Lucifer show-runners in later interviews. They end up someplace that looks very familiar, and have a major deadline looming for what they need to accomplish.

Deep in a hidden room, Flash, Cisco, Killer Frost, and Pariah make a discovery: the Anti-Monitor’s machine is powered by a familiar face: the Flash from Earth-90, missing since the Elseworlds crossover. This is very similar to some of what happened in the original story in the comics. They have a hurried consultation, realize what someone’s role is destined to be, and get more bad news. Elsewhere, Iris, Ralph, and Ray Palmer find the last Paragon: Ryan Choi, who is completely surprised to find out he has any part in this. After a reference to a family he doesn’t have in the comics and a name clearly based on his creator gets used, Ryan makes a surprising decision. Lois manages to sort of interview the Monitor, and we learn some of his background. The Paragon Superman drops in long enough to show that the impossible task is even getting to him before he races off to try and save more people.

While the dazed Flash of Earth-90 tries to figure out what’s going on and catch the others up, Pariah pops off to recruit someone else: Black Lightning, now the sole survivor of his world. Black Lightning gets a crash course in the Crisis, the Multiverse, what he’s just lost, and their only hope. He jumps into the fray after some initial confusion and buys the heroes some time to plan. In the study of the borrowed Waverider, Supergirl ponders something immensely dangerous, and Batwoman tries to talk her down. The Flashes consult in flashtime speed, each of them arguing for something slightly different. Struggling mightily with his task, Black Lightning recites Jefferson Pierce’s mantra that he has taught to his students. In the familiar-yet-different world, Constantine and company find who they were looking for, but it doesn’t go as planned.

Desperate to not lose a key piece of what they need, Iris follows Ryan to his office and makes an emotional appeal. Ryan finally agrees, some of the heroes reunite, and there’s a flashback to an earlier scene with Barry (ours) and Iris. In the Anti-Monitor’s lair, Barry prepares for an emotional goodbye with his two oldest friends. Then, Flash-90 pulls a trick from the comic book Wally West’s playbook and uses a power that Flash was the first to manifest. It’s kind of a meta moment, since the tv show was based on the Barry Allen Flash, but Wally was the one wearing the costume at that point. We lose a character that’s been around for a long time, hear a familiar musical score, and get another image straight out of the original comic. Constantine and company almost manage to do what they want, but then things get more complicated when a completely new character shows up and reveals an unexpected fate for one of the group. Constantine gets in a line about this being a different version of a person he knew from his own show. People start grouping up on the Waverider again, and Black Lightning gets to know the Flash a bit. There’s a wonderfully entertaining moment when Black Lightning learns the fictional heroes on his world are very real here.

There’s a major tragedy in the original story that comes to pass much earlier here. An unexpected return is followed by betrayal, death, a fight, and then the loss of almost everything that’s left. A much reduced group is pushed away to the last possible stronghold, a place we haven’t seen in several seasons, but makes perfect sense as a last stand. Even there, tragedy isn’t done yet, as a sociopathically ruthless villain reaches out and costs them one of their greatest heroes. It’s a horrible moment, but very in character and beautifully played out. It leaves us with roughly a month to brood on all these cliffhangers.

What I liked: The nods to the past are amazing. I wasn’t wild about the Birds of Prey tv show, but it was nice to see them acknowledged. The 90’s Flash was something I was very much a fan of (I own the boxed set), and it was nice to see him treated like a more experienced and knowledgeable hero. It was great hearing his theme again. The heroes are doing the best they can, and are struggling with overpowering forces. The inclusion of Black Lightning worked, and his scenes were written really well. I’m intrigued by the inclusion/introduction of Ryan Choi. I like the dynamic that’s forming between Supergirl and Batwoman. I hated to see that final betrayal and so many deaths, but they were all done really well.

What I didn’t: I’m really not sure now what we were supposed to make of one character’s really odd choice a while back, especially now that it’s been undone by the writers. I get why they couldn’t, but I’d love to have seen some of the Legends we’ve lost.

I thought this was another amazing episode. I’ll give this one, too, my rare 5 out of 5.

A whole month??? Way too long to wait.