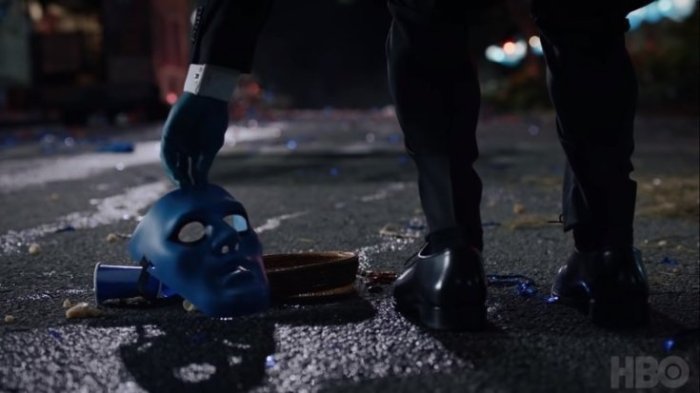 Doctor Manhattan comes face to face with himself. Sorta.

With the big surprise at the end of last episode, there are a lot of questions. So even though there’s only one more episode to go, they take most of this one to explain some backstory among several of the major characters. It’s a confusing slip through various times, but then, that’s how Dr. Manhattan lives his life, at least from our perspective. Especially with what we learned at the end of last episode, there are several ways to read “A God Walks Into A Bar.”

The logo games this week have it fade from the usual yellow to Dr. Manhattan’s pale blue as he walks through the aftermath of a big parade and eventually walks through the title and does what it says. Inside is a very familiar figure, and the Doctor joins Angela, just off shift during her career as a cop in Viet Nam. He makes some odd comments, only to be expected given who he is, but Angela doesn’t believe him. She makes some very insightful comments, and make an analogy about Zeus that’s probably more on target than she knows. Along his timeline, we see the creation of one of the locations that’s been a big part of the season, which leads to a cheap but accurate sex joke from Angela when he explains some of what he was up to.

Her questions lead to a part of Manhattan’s past I don’t believe has ever really been touched on before, as we see some of his childhood, and why he selected a particular building to be part of his creation. There’s an awkward but surprisingly straight-forward (especially for the time) conversation with some people who will be very important later. They make a request of young Jon, long before his Manhattan powers, and we see him honor it decades later.

Having a conversation with a man who experiences time all at once can be disconcerting at best, since he’s having every chat in his life at the same time, and some of them connect over different times. This proves to be the case with part of his first conversation with Angela, and he disinterestedly explains some of his complicated relationships. She reveals some obstacles to getting involved with the god-like being, and he makes a few counters. He tries to explain how his unique relationship with time works, and I don’t blame her for not getting it. His version of omniscience makes him sound relatively powerless. There’s a lot of recurring banter about them having dinner the following night.

Taking the matter somewhat seriously, mostly for the sake of argument, Angela points out a major problem with them dating, and he relates a very elegant solution she comes up with two weeks from now (there’s going to be a lot of this time-shifting throughout the episode). Her solution is creative, and lays the foundation for a character we’ll know later. Then we jump back to that first conversation again and she scoffs at him, but admires what she believes to be his ability to think on his feet. He lays out much of their timeline, including a fight six months from now, which we get to see. There’s a lot of time paradox, and Manhattan’s unflappable calm probably doesn’t make being with, or around, him any easier.

Leaving Angela at her place, he does the “Manhattan Transfer” to Ozymandias’ hidden fortress. The mad genius is exasperated at humanity’s inability to grasp the gifts he offers. You know you have a bad grasp of the human condition when the god-like being who can’t perceive reality in the normal way is explaining things to you. Their conversation ranges over events from the original Watchman story to Manhattan’s extra-terrestrial activities to relationship changes. After Manhattan explains why he’s there, and Ozymandias asks enough questions to make me slightly nervous, they come up with a way for Manhattan to be a bigger part of Angela’s life without drawing extra attention or the relationship being completely unequal. After a warning from the genius scientist, the nigh-omnipotent doctor runs an errand involving some relatives on the other side of the relationship. Just before he goes, he and his former teammate discuss Ozymandias’ future, which sets in motion something we’ve seen throughout the season.

Things get increasingly confusing as Manhattan and Angela have a discussion and put their new plan in effect, and then we’re back in the bar at the start (from her point of view) of their getting to know each other. There’s what sounds like a hint about a future plot thread as they discuss the future. Well, he tells her about the future. This links back to an earlier discussion about music, and then some big changes come for the Doctor, setting up his new identity.

After all that, we get back to “now,” or at least where we ended last episode. Cal Abar is revealed as Dr. Manhattan, and Angela is telling him they’re in a lot of trouble, as the 7th Kalvary shows up with a device that might actually take out the near-god. Angela briefs him as he tries to get his bearings and re-attune himself with his near-omniscience. He does a few odd things, and then gets the kids someplace safe as the bad guys close in. This was set up in the past, as we get to see when the disguised Manhattan meets Will Reeves in Captain Metropolis’ former home. Through two different eras, Manhattan relays some questions and answers back and forth between Will and Angela, which might have set up a time-loop that cost Angela dearly, as she realizes with horror.

Worries about what happened and why in the past get put aside as Angela goes on the offensive. Using a few neat hidden compartments, she arms up and goes after the 7th on her own. Why no one calls for backup, I’m not sure. Angela carves an impressive swath through the assembled bad guys, and when her husband joins in, they seem unstoppable. But he’s already seen how this plays out, and they manage to miss one with really unfortunate consequences, possibly for the entire world. This loops back to the “original” meeting in the bar, and an agreement that starts things off, at least as we mortals perceive time. This episode is the only one so far that has an after-credit scene, which is a very strange bit of business back in Veidt’s area, involving tomatoes, a horseshoe, and a possible escape. Although what good that would do him given where he is, I’m not sure.

What I liked: I get that it’s not quite time travel, but I’m not sure what else to call the way this show works. I salute the writers for taking something immensely complex and making it work, looping time back on itself over and over. It was a complicated bit of writing and they pulled it off. I liked how they handled the scene at the bar and all the ripples forward and backward. We got a lot of explanations about things we’d seen.

What I didn’t: Manhattan is less demigod than slave, if I understand how his powers work correctly, which is just odd. There was a really big question near the end of last episode that was utterly ignored here, and I really what to know what the hell was going on with Angela’s transfusion. I’m not sure I understand Veidt’s reasoning about how he views where he is. The Gamekeeper is a bit confusing now.

If nothing else, I respect the artistry of the writing on this one. I’ll give it a high 3.5 out of 5. I expect next episode is going to be a very complicated finale.