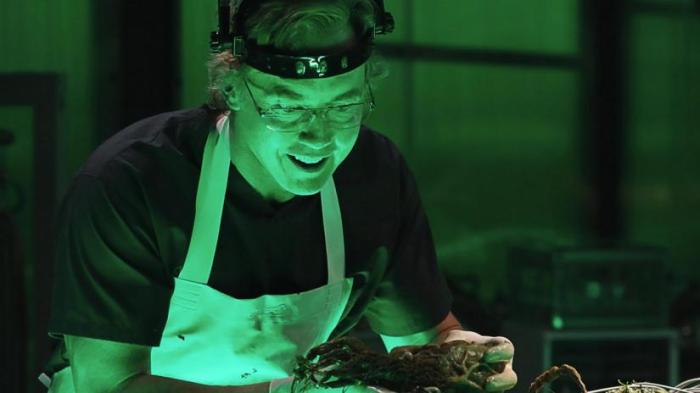 Well, at least he enjoys his work.

The first, and sadly only, season of Swamp Thing is almost over. I’ve really been enjoying this, and it’s a damn shame it only made the one season. I’d certainly rank it above Titans, whose third season has been announced. This is a suspenseful episode with a lot happening, a secondary character making a transformation, and one of my favorite obscure DC characters stops by and makes a very in-character appearance. The end is almost here as we see “The Anatomy Lesson.”

Last time, Swampy was captured, and Abby fled Atlanta as she realized things were afoot. This one picks up with Jason Woodrue returning from his outing, definitely on the muddy side, but very excited about what happened. Caroline, his wife, is confused by what’s going on, and he doesn’t really take the time to explain things to her. As she relates a disturbing dream she had, we see the big convoy arriving at the Sunderland plant with the captive Swamp Thing. Caroline’s dream seems oddly clairvoyant, but Woodrue is too wrapped up in what’s going on to really take note. He makes some vague promises, gives her a reminder, and leaves her behind. Not only is it not cool to leave your wife alone after a bad nightmare, but it’s worse when she has severe and worsening dementia.

Abby bursts in to Liz’s place, just back from Atlanta, and gives her friend a rough update on what’s happened. Abby goes over the evidence she’s found, warns it will be dangerous, and Liz recounts a story from their childhood to explain why of course she’ll go with Abby. They come up with step one of a plan, although Abby admits she doesn’t have step two yet. Sunderland comes in to the facility where Swampy is being held, and gets an explanation about some of the odd lighting. Woodrue isn’t being subtle about being left alone to work, and Sunderland leaves to “take care of a few things.” The mad scientist makes some ominous plans, gloating over his captive.

Back in the hospital, Daniel wakes up from another nightmare to find he has company: the Phantom Stranger is back. The Stranger shows Daniel a worrying future, and asks him what he’s going to do about it. Daniel is annoyed, and the Stranger is his usual enigmatic self. Abby and Liz turn up at the Woodrue house, looking for the scientist. He’s not there, Caroline is, and our heroes realize a few things about the lady. Abby makes a few helpful suggestions and is clearly concerned about Carline. Liz makes a helpful discovery and the pair take off for their next stop. Woodrue gets to work, narrating his findings into a recorder. He makes a few surprising discoveries before Swampy wakes up and expresses his displeasure.

The dynamic duo does some more investigating and comes up with the location Woodrue probably has Abby’s friend. They also find out some interesting things about what Maria Sunderland is up to, but it’s not their problem and they’re kind of busy. Swamp Thing tries to plead with Woodrue about what he’s doing, but the scientist is far too wrapped up in the thrill of discovery to worry about ethics or causing his “subject” pain. Woodrue just keeps going, and some of what he finds is shocking to the hero he’s working on. Daniel isn’t at all happy with the Stranger and asks him what’s going on and why he’s doing all this. The Stranger remarks that Daniel’s life is his own journey, and he has to make his own choices. He leaves, and Daniel mulls things over before deciding something he might regret. The Sunderlands have a showdown as Maria gets put off on voice mail and then finds out that A) Avery is alive and B) he’s outmaneuvered her. Things don’t look great for Maria.

At Delroy’s, the namesake owner finds Matt Cable drinking hard. Del tries to cheer Matt up and offers some advice about the tangled relationship with his mother, but Matt isn’t in the mood to listen, just drink more. Team Abby get to the hidden research place and start following the steps of what Daniel saw in his vision. Things are going just as poorly for them this time as last time when they get some unexpected help in the form of a very different version of the Blue Devil from his comic book self. It’s an ugly, one-sided fight, but the head thug takes advantage of the time to force Woodrue to evacuate the facility. Eventually, Liz and Abby emerge to see the aftermath of the attack, and it’s not pretty. They find Swamp Thing, free him, and help him recover from what Woodrue did. As soon as he’s free, Swampy lurches off to find out if some of Woodrue’s claims are true. A worried Abby follows.

Liz is determined to find out what happened and is set to begin her investigation. Daniel recovers from his own odd experience and runs away. Matt’s evening catches up with him in an ugly way. I’m presuming this is a setup for something more to come rather than a very condensed morality play. Jason gets home, calling out excitedly about his work, and then makes a tragic discovery about why you shouldn’t leave Alzheimer’s patients unattended.

The last two scenes are both very dark in different ways. Avery pays a call on Maria in her new circumstances. He’s mostly there to gloat as far as I can tell, but he does seem to want a few answers. She’s not inclined to give them. I suspect that this marriage is over, although that was true last episode, really. She rages impotently and he leaves her behind. Out in the swamps, Abby finally catches up with Swamp Thing as he determinedly goes to learn the truth. He finds it, and shares it with Abby, and I suspect both of them might have been happier not knowing. I don’t believe this often, but every once in a while ignorance really is bliss.

What I liked: The bad guys took a lot of precautions to keep Swampy captive, and they make sense. They didn’t really make any mistakes, there’s just no way they could have planned on what happened to them. I really liked the Phantom Stranger and his giving the choices to Daniel. I’m generally not a big fan of massive changes from the original, but this was an interesting take on Blue Devil. I don’t like either of the Sunderlands, but you have to grant that Avery is pretty slick.

What I didn’t: I’m not sure where they would have put her in, but I would have liked to see Madame Xanadu. I didn’t care for the bits with Matt Cable. I feel really bad for Caroline Woodrue, and don’t care for Jason at all.

I remain impressed by this series. I’m giving this a high 3.5 out of 5. It’s a shame it’s almost over.