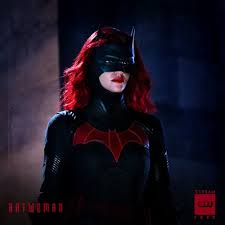 Batwoman started strong, and I think it’s still doing well. They’re doing a good job of balancing the very important mystery of what happened to Batman/Bruce Wayne without making the show about it, or him. Kate is figuring herself and her new identity out, and this episode shows that well. A few other things get stranger, and we see the first of what promises to be many Bat-foes in “Down, Down, Down.”

Opening a bit differently, tonight’s episode starts with Alice having a flashback/nightmare dealing with her childhood. If this wasn’t symbolic, then something truly odd was going on in the Kane household. That or she was somewhere else after the accident. In the present, Kate continues her journal to Bruce, musing about how she didn’t mean to give the city hope, and can’t do what he did because she’s not him. Her writing gets put on hold when Alice takes over an iconic part of the Bat-mythos to summon Kate for a meeting. Oddly, despite this being really public, no one else shows up. They end up arguing about heroism, the whereabouts of Alice’s missing henchman/lover Dodgson, and what’s happening in the city. This scene ends with some wanton vandalism that brings a few things more in line with the appearance they had in Elseworlds, so I guess we’re almost caught up to that timeline. That would put Batwoman about a year behind the “main” CW/DC Universe.

Next up is a commercial for Elliot Estates (a name familiar to comic book readers who know about Gotham’s ins and outs) which gets interrupted by a brutal attack. I’m not sure this particular bit of violence is ever actually explained. At Crow Headquarters (The Crows’ Nest? I’m going to start calling it that if they don’t name it), Sophie spars with her husband, Tyler, while having flashbacks, and then has a meeting with Commander Kane, where she asks for a special assignment. Kane is rewatching footage of the attack on the convoy that had Alice, and raises a good point that, if he follows up on, is going to reveal some things he might not want to know. While Vesper Fairchild takes to the air to talk more about Batman and his not being around in a few days, Mary continues her double life, coming home to find a surprise that’s going to complicate pretty much everything.

Kate goes back to the office in Wayne Enterprises, but we don’t know why. She’s not doing business there, and we’ve seen there are other entrances to the city’s version of the Batcave. Lounging at the desk is Tommy Elliot, who in the comics was a childhood friend of Bruce Wayne’s who eventually became the villain known as Hush. Here, he gloats about finally being richer than Bruce, is convinced he’s come back from his years’ long absence, and is generally dismissive of Kate, using her nickname from the Crow Academy. How he knew that, I’m not sure. They argue about Bruce for a bit, and he leaves an invitation to a party. Considering how parties seem to go in Gotham, I don’t know I’d ever go to one.

Not done having a bad day, Kate next goes to the armory at Wayne Enterprises (the public one, not the hidden Bat one). Luke is there with various security personnel, trying to figure out what was taken in a break-in. As a general rule, a break-in at an advanced company is never good for whatever hero happens to be in that area, and at an advanced weapons place, even worse. There’s some banter about a new toy you just know Kate’s going to end up with, and then she goes to a scene that shows her Bat-masquerade is stirring up parts of the city. Kate worries that she’s making things worse in Bruce’s absence, an understandable concern.

While Vesper once again offers commentary on Batman fading away again, Mary learns her new circumstances are not good for her social life. They’re going to be bad for her secret clinic, too, unless she’s going to start copying the Oliver/Diggle dynamic from early days on Arrow. When asked some personal questions, Mary steps up and is a great sister. After some more genius is also klutz tripe, Luke explains to Kate what was stolen and why it’s an issue. They wonder who is behind this, and debate suspects. Luke has a change of heart about his position on Kate’s costumed activities, but she isn’t ready to hear it.

Going out for her own night on the town, Alice wanders a familiar location and helps herself to a few things, with some comedic results. Her nocturnal adventure gets interrupted when she runs across an unexpected visitor, and she blithely disregards the deal she made with Kate. With no other leads to pursue, Kate goes to Elliot’s party, encountering Mary and her new shadow along the way. There’s some great communication in the elevator, especially some non-vocals between the sisters. Once at the party, Kate strikes up a new friendship with a very entertaining bartender. We also run into Tyler, who is very direct about his feelings for Tommy Elliot, but also surprisingly in the dark about some of his wife’s past. Reagan, the bartender, proves to have some amazing observational skills, further amusing Kate. There’s some parent/daughter drama as Col. Kane talks with Kate about Alice, and Mary complains to her mother about her new “friend.” Neither parent is really in a listening mood. Kate finds Tommy, drops some barbs, and runs a really obvious headgame on him.

The family drama continues as Commander Kane gets an unexpected call, and, from what he hears, starts to wonder if Kate is right about Alice being Beth. There’s a battle of words, and Alice scores all the points as far as I could tell. Wandering her new haunt, Alice makes a discovery that surprises her, and throws the madwoman off her game a bit. Worried, the Commander tries to pull his family out of the party, which I don’t entirely follow the logic of. No one knows where Kate is, and Mary keeps playing vapid while actually being helpful. Kate herself confront Tommy, who clearly fell for her trap, and we find out his knowledge of Bruce’s secret comes from a very recognizable source. Clearly beyond reason, Tommy rants part of his origin story and then pulls a desperate, over the top villain move, demanding something that just isn’t going to happen.

Being off on her own is an advantage for Kate, as she isn’t caught up in the mess the rest of her family is. Sophie and Tyler make a good team, and Mary stays in character as they face their trouble, while Jacob Kane and his wife Catherine have their own discussion. Mary watches some interesting misdirection play out, while Catherine arguably has her priorities out of whack. Sophie and Tyler save part of the day, although part of how they do it makes no sense at all.

Fortunately, Tommy built his new pride and joy to literally overshadow Wayne Enterprises, so Kate can get to the ‘cave easily enough. She has a brief but honest talk with Luke, and then, in another example of misplaced priorities, stops to give the Bat-suit a makeover. I agree it needed to happen, but in the midst of a crisis? Mary, finally getting to some of the wounded, drops her charade and the observant Sophie takes note.

Elliot gets a showdown, just not the one he wanted. He and Batwoman play tag on the roof while he rants. Kate, still not a pro at this, managed to not do something she needed to, and while Luke helps her out, she needs to stall. This bit of tech-wizardry also made little sense in the execution, although it was dramatic. Batwoman manages to save some people, almost get killed by Elliot after all, and then get saved by a most unexpected “hero.” In the conversational aftermath, Kate follows the irksome trend of masked heroes taking off their masks in public spaces, and the conversation covers choices, torturing corpses, and someone being gone forever.

The wrap up scenes are interesting. Elliot gets arrested, boasting he’ll be out by morning. The Kanes get home to find out someone’s been visiting, and Catherine in particular gets disturbed by something left behind that she quickly hides from her husband. This lady clearly has some secrets. Kate catches up with her bartender, which annoys Sophie and amuses Mary. We get another journal entry to Bruce about her doing the best she can to defend his city. Her pose at the end is from some of the series trailers, and some fans are saying this proves she’s caught up to the Elseworlds crossover. I’m not sure I see that logic, but she’s coming more in line with her appearance there, certainly. Vesper closes the show, wondering what the new, sexier, curvier Bat should be called, and Sophie becomes the first to say the name.

What I liked: The writers know their Bat-history, and using Tommy Elliot as the villain here makes a certain amount of sense, given what he knows. Who he got his information from was great, and makes me wonder who the first costumed villain to pop up is going to be. I’m liking Mary more and more as we get to see more of her, and honestly, Sophie a bit less. Catherine is intriguing. I like that Alice has some levels to her besides trying to be more or less a female Joker with a different theme. The quick chat between Kate and Luke needed to happen, and I’m glad it’s out of the way.

What I didn’t: Kate and Luke’s tech trick in the showdown didn’t track for me. I’m not sure why Jacob Kane decided a problem somewhere else meant he should evacuate where he was. The bit with Sophie and Tyler saving Mary didn’t entirely make sense to me. I’m disliking Sophie more as we go, even if I do understand at least some of her choices. I hope the mess with Alice doesn’t drag out all season.

Batwoman is still impressing me. I’m enjoying the show, and think it’s a great addition to the CW-verse. I’ll give this episode a 3.5 out of 5.