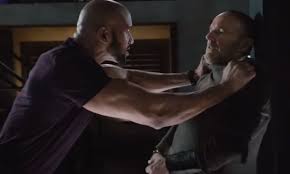 Negotiations between Mack and Sarge are going well.

The Agents of SHIELD are now in the back half of their season. They’ve managed to reunite Fitz and Simmons, so fifty-fifty they get split up again soon. Earth has a new threat or two, depending on how you count Sarge and his crew. There’s a lot to adapt to. Mack isn’t starting off with an easy year as Director of SHIELD. There are some surprising developments in “Toldja.”

Back in Kitson City, which we don’t seem to be able to get away from, a new mystery woman is trying to recruit for a crew. She’s clearly lost interest in the man she’s talking to, but her interest is piqued when Fitz, Simmons, and Enoch teleport in. The casino is about as hard to impress as New Yorkers, since the patrons look up for a moment and then go back to their business. Through amazing stupidity, they lose their transporter. Fitz goes off on Enoch, and Simmons says something everyone on a bad trip has at one point or another.

Cuffed and under guard, Sarge is brought to the Lighthouse, with Snowflake babbling away in the background. They part with a line from Sarge that takes on a lot more meaning later. Judging from the reactions they get marching through the hallways of the Lighthouse, I’m not sure everyone was warned about who Sarge looks like. They get to the control room, and Sarge is insufferably smug. I really do want to smack this man almost every time he talks. Sarge is condescending and vague, and doesn’t seem interested in cooperating. Tensions run high between Yo-Yo and Mack, and Daisy gets brought up to speed on some of the developments while she was way out of town.

Back on Kitson, Simmons isn’t enjoying her return sans the special snacks. The three of them almost make it out of the casino before Kitson security arrests them for the last trip there. Jaco isn’t doing well in his cell, and Yo-Yo tries to bargain with the man for healthcare. He demonstrates a remarkable loyalty to Sarge and refuses. He also shares a bit about his background, and a lot of that was very unexpected. Sarge and Mack dance around each other, with Mack pressing forward and Sarge not even answering something as simple as what his name is. Sarge is unshakably confident and irritating, in between issuing dire, if vague, warnings.

Deke drops in on Daisy as she preps the Zephyr for more missions. She’s friendly, but distracted, and he clearly is hoping for more. He does boast about his success, but also asks about her own recent space mission. She tells him something he didn’t know about, and he is clearly not pleased. May and Mack study the gear from Sarge’s truck. That seems like it would be a decent job for Benson, but for whatever reason, he’s not around this episode. Deke storms in, demanding answers, and he and Mack have a discussion about some of Mack’s choices. I actually agree with Deke that Mack made some questionable calls on this issue. Mack manages to soothe his ruffled feathers and puts the man to work on Sarge’s gear.

Jaco keeps coughing, while Snowflake listens from the next cell and murmurs. Those metallic, heavy walls must be thinner than they appear. Mack follows May’s advice about one of Sarge’s interests, and has him brought to the Director’s office. Sarge stares with interest at the hologram of Coulson, who Mack praises. Once again, the two have very different mentalities about leadership.

Fitz offers an analysis of Kitson’s office and décor, which one of the guards corrects with praise for the Kitson family. The man himself finally comes in, played by Anthony Michael Hall (loved hm in The Dead Zone). He seems cheery and avuncular as he makes threats and decides the trio’s future. Fitz and Simmons offer some rational alternatives, but he’s not interested. Fitz and Simmons are placed in a deadly game with the scruffy scoundrel we’ve seen a few times now. Kitson works the crowd, demonstrating he’s a great showman. As he’s in mid-spiel, the woman we saw in the opening shows up and enters into some quiet but intense negotiations for Fitz and Simmons’ lives. She makes some very good points.

Mack and Daisy talk about the mystery of Sarge, his leadership, and Fitz and Simmons being together, but still not at home. Daisy then moves on to Mack’s love life. Fortunately for the Director, this is when Deke wanders in and announces he has some of Sarge’s gear working, and has found three targets, two not including himself. May and Yo-Yo are dispatched to lead teams and retrieve the persons of interest. Khan goes to check on Jaco and gets a really big surprise. No idiot, he calls for backup, and Mack and Daisy deal with Jaco’s new talent. May and Yo-Yo get their targets with no problems, and set off to rendezvous on the Zephyr.

Enoch toasts their new benefactor, and Fitz and Simmons try and both get to know her a bit and talk their way out of her schemes. They end up saying just what she wants to hear, and FitzSimmons are intrigued despite themselves. They put the pieces together of how to proceed with her next step. Mack visits Sarge again, and Sarge finally looks a bit less sure of himself when Mack reveals Jaco has been dealt with. Mack mentions what they’ve been up to, and Sarge is back to his cocky self.

The teams meet up and store their prisoners. For some utterly inexplicable reason, they put both of them in the same containment pod. At the absolute best, that gives them a chance to conspire and plan. They were also supposedly moving towards each other, although one was taken in an apartment, which aren’t known for being portable. At any rate, things do not go the absolute best, and the prisoners become something else. Smirking, Sarge makes demands before he tells them how to handle the mess they made, and they lose another agent in the process. I really wonder how deep SHIELD’s bench is at this point. They’re nowhere near the strength they once had, and they keep losing people. That can’t be good for the numbers.

Mack honors his deal (I wonder if Sarge would have done the same?) and Sarge and his band are on their way. Team Kitson meets up and discusses options, which end up involving a few minor characters we’ve seen before. The mystery woman shares her plans and goals. The destination pleases Fitz and Simmons, but what she’s after shocks them. Enoch also comes to a surprising decision.

What I liked: Fitz and Simmons are back to being the impressive team they are. Yo-Yo is using her powers again in a way that makes sense, instead of seemingly forgetting them. Jaco’s surprise I didn’t see coming and I’m really curious about. It’s interesting Sarge keeps evading any questions about himself. Mack and Daisy made a great team. May and Yo-Yo ran very smooth operations. I’m hoping the new woman’s announcement means we’re going to learn about something that’s been hanging around for several seasons.

What I didn’t: The shared pod was just foolish at best. I get they are trying to differentiate from Coulson, but Sarge is so very irksome. I was surprised and not pleased about Enoch, although I understand what he did.

The big plots are progressing, and we’re finally learning more about what Sarge-not-Coulson is up to. I’ll give it a 3.5 out of 5.