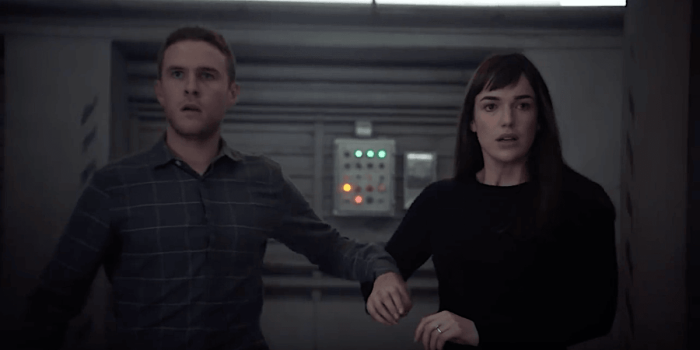 Poster children for “Should not be left unsupervised”

With an ensemble show like Agents of SHIELD, there’s always a balance to be considered: plot, character development, and who gets screen time. This season, they seem to be shifting around and focusing on smaller parts of the team for scenes or even episodes. In “Inescapable,” the focus is on SHIELD’s star-crossed lovers, Fitz and Simmons. We get to see their current difficulties, as well as various points in their past. As much as it gets said, I think “Unstoppable” might have been a better title, but what do I know?

The episode starts off with Simmons lying on a white, glowing floor. She comes around and finds out Fitz is there with her. They almost have time to fill each other in on what’s going on before Atarah pops up in their mostly featureless room and begins telling them what’s expected of them. Fitz looks confused at both the demands and the information that he’s already done this before. Atarah shows them the impressive resources they will have to work with, and then vanishes. Fitz and Simmons take some time to catch up, relax, and enjoy each other’s company. After all, if they’re successful, they have all kinds of time. He asks something important that’s a bit different for him than it is for Simmons. Fitz starts pushing on things Simmons would rather not talk about, and things start getting really weird, and Fitz makes a sound I didn’t know he was capable of. He ends up seeing some of Simmons’ past, and learns a few things about her.

In the real world, Enoch worries about his friends and Atarah essentially doesn’t care that what she’s doing is dangerous. Fitz does his best to calm Simmons, and sees several odd things, including a kiddie version of some of SHIELD’s exploits. They end up back in the white room with Atarah not pleased they haven’t progressed more. Atarah and Enoch talk some more, with Enoch still expressing a lot of reservations about this plan, and Malachi expressing some about Enoch. Fitz has a really strange argument, and then manages to improve Simmons’ situation with a bit of applied psychiatry. Clever, but not nice.

Things can change quickly in this odd place they find themselves in, and Fitz finds himself reliving some of Simmons’ memories about a traumatic event we didn’t see much of. The team is there, and Fitz is utterly confused as he slowly learns what happened to the “other” him back on Earth. Simmons talks him through some of what he’s seeing. Fitz is awash in conflicting information as he learns some more of what he’s “missed,” although that’s not really quite the right word. As someone once observed, time travel is hard on tenses, and sometimes needs whole new words. Fitz also finds out about Coulson, and can’t handle any more, exiting the painful scene, Simmons following shortly after.

They now find themselves back in their SHIELD Academy days, and reliving one of their earlier encounters. They slip back and forth between staying in the scene for that night and talking about the current difficulties. They keep hearing a menacing sound, and they get joined by a very unwelcome part of the past: the evil Fitz from the Framework. They run again, and end up back where Simmons retreated earlier. This isn’t safe either, as some of Simmons’ mental discipline, that sounds a lot like something Brainiac 5 has been talking about over on Supergirl, slips and they find a new foe.

There’s a lot of running, hiding, fighting, and revelations. Fitz gets in a great line about Simmons’ background and culture. After talking about their nightmares tracing back to one moment, the younger FitzSimmons meets Coulson for the first time, and we see their recruitment to his team. They both agree that Coulson was inspiring that day, although they had some different reactions to the offer. As frequently happens, Fitz and Simmons get split up again, now dealing with dark aspects from each others’ psyches. We’ve seen Evil Fitz before, of course, but Simmons’ contribution is new and terrifying.

Enoch again pleads with Altarah, and makes a few points. The others don’t agree with Enoch, and take steps to make sure he doesn’t cause them problems. Fitz and Simmons both go through some fairly horrific things, and then both come to an important realization about the same time. If they can call up bad things from the past, they can do more. Some familiar faces show up to aid our heroes. They meet up again in one of the places that was very important in their mutual past: the containment pod that trapped them in the ocean. Simmons complains about the design, but Fitz makes a few valid points about it. I really wanted to see a cameo by Grant Ward here, but maybe that was too hard to arrange.

The trapped scientists end up in a strange argument about their past, their personalities, and saving each other. It goes from an almost normal sounding argument to something sort of surreal, as their dark selves circle around outside. Fitz and Simmons come to a realization, and agree they need to face their darkness. They rush out of the pod, ready to fight, and see their darker halves are… occupied. This little scene had both great visuals and great lines.

They end up back in that starting white room once again, and have a reconciliation/acceptance of each other. Altarah pops up again, displeased with them wasting time. Then again, she never seems particularly pleased. She starts to threaten the pair, and then a few unexpected things happen. Fitz and Simmons get some help from an unexpected quarter and are off to their next stop, although we don’t get to see what that is yet. I’m wondering if those two are going to end up in some SHIELD version of Hitchhikers Guide to the Galaxy as they bounce around from place to place.

Back home, Mack is thrilled at Daisy’s news that Fitz is alive. She points out Fitz is still in danger, and Mack pretty much dismisses it, showing great confidence in the combined resources of Fitz and Simmons. He explains to Daisy what’s going on, how it relates to what happened to Altarah’s people, and they have a comedic exchange of lines to end the episode.

What I liked: This was a very well written and acted episode. There were some great comedic bits and some heartbreaking reveals. We got a lot more insight into Simmons, so she seemed less like the perfect good girl scientist. I think “Observing from a distance” and the immediate post-pod scene were my two favorite parts. I liked getting to see some of the aftermath of Fitz’s death, despite how sad it was. They did a great job of making people look a few different ages and stages of health.
What I didn’t: As I said, I really wanted Ward to pop up. He was such a big part of their early careers and relationship. There were a few things hinted at that I’d like to have seen fleshed out, like Simmons’ father (have we ever actually seen either of her parents?).

I thought this was one of their better episodes. I’ll give it a high 4 out of 5. This will be a tough act to follow.