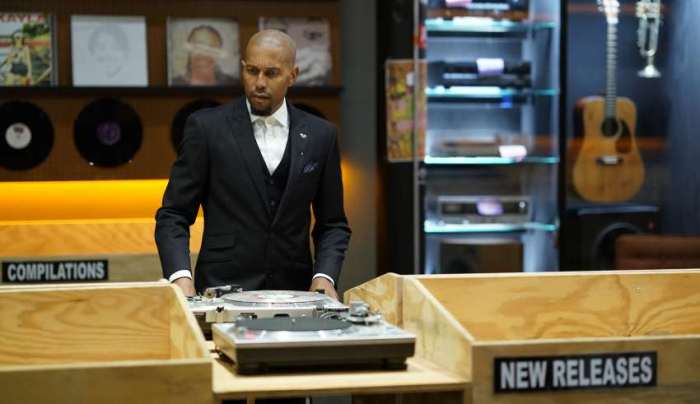 The source of most of the problems this season

Cloak and Dagger are almost done with their second season. There are some seriously not good developments in the future, and a fair amount of backstory on two of the villains from eight years ago forward. The strange combination of their scientific accident giving people powers but crossing over to the mystical should be jarring, but somehow it works. We learn a lot about Andre the would-be god as this story unfolds. A lot of what got him into trouble was his quest for the “Blue Note.”

96 months ago (8 years, I don’t know why they did it by months), we see Andre preparing for a gig at a club. He’s disagreeing with one of his bandmates about something he’s got planned. Andre has always been a selfish, power-hungry ass, or at least he was then and is in the present. His plan falls apart when we see him get what appears to be the first of his staggering headaches while on stage. In the present, in his bizarre record shop, he picks a few selections with familiar names, still on the same quest as that long-ago night.

Tyrone is using the veve technique to try and find Andre, but it’s not yielding the results he hoped for. He and Tandy debate what to do next, and come up with a few ideas. They split up to put them in play, going in very different directions. After a worried call to her mother, Tandy goes to see the new Bridget/Mayhem. Mayhem isn’t thrilled to see the vigilante, and they debate about what to do next. They ride on a call together, and end up finding what could be a clue to tracing Andre. They do some fast talking and end up bending a lot of rules to get what they want.

After another quick check-in with Andre’s past, we see Tyrone make his own call. Unlike Tandy, he gets through. Adina, like Melissa, is doing things she’d rather her child not know, but Adina’s transgressions are a lot more serious, better thought out, and will have more serious repercussions. Tandy and Mayhem return to the church, where they can work in private. Tandy tries her power, but gets some unexpected results, and a commonplace sound from years ago becomes a lot more ominous. It’s an excellently done, subtle sound effect, and I wonder how many younger viewers didn’t get it. The two women agree they might need Tyrone.

Tyrone himself has been stalking Solomon, the young gang member he’s dealt with a few times. They end up in a diner, and Tyrone assures the younger man he just wants to talk. Solomon, among other issues, doesn’t know how to read, so Tyrone helps him out with a newspaper article about Luke Cage, written by Karen Page, giving us another strong link between this show and the sadly finished Netflix/Marvel world. Wouldn’t it be something if Cloak and Dagger became a show that every once in a while updated us on the cancelled Defenders? Tyrone gets Solomon to agree to set up a meeting, and the young man offers some very insightful comments about things that are broken.

92 months (roughly 7 ½ years ago), Andre comes to a decision that gets interrupted by the infamous Roxxon rig explosion that gave Tyrone and Tandy their powers. The unexpected string of events brings him in contact with someone else we know, and Andre starts to learn how his rather unique powers work. I admit that I really don’t care about Andre’s past that much, but these scenes are well done, and show that he was a monster even before he got his abilities.

Tandy chews on her nails while Mayhem cleans her gun, so they have some very different nervous habits. Tyrone teleports in after Tandy called him, and she explains what’s going on. Tyrone isn’t thrilled, but agrees to help. They end up sharing some visions of the past, showing Andre as a deceitful manipulator. Further back, they find a link between Andre and one of his earliest victims. Finding their way out of this dream world, the pair have a run-in with Andre, who continues to justify his actions and spout grandiose plans. Tyrone and Tandy make it back to reality, and warn Mayhem about a new major threat to the city.

85 months ago, a bit over seven years back, Andre sets up the center we saw him working at earlier in the season. He is doing a fine job of stocking his own hunting preserve. The Roxxon execs of season one were greedy and shallow, but Andre is, in my opinion, evil. In the now, Tyrone gets a call and tells them a bit about what he’s up to. Mayhem wants to come along, and Tyrone explains his very logical reasons for not allowing that before teleporting away. While Tandy finds herself not equal to something she wanted to do, and it’s a good thing, Tyrone has his meeting. He sets up a nice dramatic entrance, and gets his point across early that they are going to listen to him. Tandy stands up for her beliefs, showing she has lines she won’t cross.

While Tandy deals with the after-effects of her decision, Tyrone lays down the new law. The people he is talking with aren’t really enthusiastic, but he shows them how little choice they have. Tyrone has gotten a lot better with his powers since his fumbling accidental uses first season. Tandy makes her stand, and wins to an extent, with a warning delivered to her at the end.

Tyrone comes to the other point of his meeting and makes a “request” of his associates. Tandy takes care of someone who needs some help, gets startled by Tyrone, and they make a hasty exit. They talk over what’s going to happen, and then spring into action. Or try to. Tandy leaps to a wrong conclusion, and they disagree for a bit until they discover what the error was. Moving to a new location, they discover Andre in the midst of a ritual that draws in some familiar faces and presents our heroes with some challenges. The two pull off some great teamwork, but it seems to be just a bit too late. Something ominous happens and the episode ends on a dark note. They’ll hopefully finish this fight, and defeat their villain, in their next and final episode of the season. And maybe for good, since there’s still no word on a season three.

What I liked: I really enjoy this show overall. The two lead characters are great, and I like the world they’ve built for themselves in New Orleans. If there was a city where music and magic would blur together, that’s where it’d be. I don’t like Adina’s recent choices, but I understand them and see where she’s coming from. I’m glad Tandy made the decision she did near the end of the episode. Tyrone’s meeting was very well done and showed a man confident in his power. It also, interestingly, drew some parallels to Luke Cage’s third season, and I loved the mention of Harlem’s Hero and Karen Page. If things hadn’t ended as they did, I’d loved to have seen Cloak and Dagger crossover with some, or all, of the Netlix/Marvel heroes.

What I didn’t: The scenes were well done, but I just didn’t care that much about Andre’s past. The new Mayhem/Bridget is going to be someone our heroes have to watch carefully. I really don’t get why they used months instead of years for the flashbacks. Andre is just an evil being and needs to be stopped.

I admit I might be biased, but I’m lowering this one to a 3.5 out of 5 for so much background that I don’t know we needed or wanted it. I’m hoping they end really well next episode.