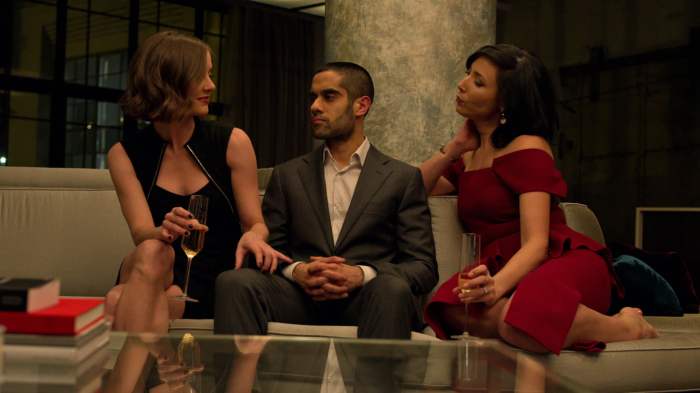 Seriously, Davos, how do you look that grumpy in THAT situation?

The second episode of Iron Fist’s second, and regrettably last, season has the looming Triad war looking more and more likely, if not inevitable. Peace is not an easy thing among bitter enemies, and there are a few outside agents making things worse. Add in a new personal problem for Danny and Colleen, and things aren’t looking great in “The City’s Not For Burning.”

The episode opens with a man making a shady deal who, in turn, gets ambushed by several of the Hatchet Men. The victim is thrown into the street, where Danny finds him, but no one will even call 911 for him. Danny does what he can, but the man is seriously injured and, for whatever reason, Danny doesn’t use his healing ability. We’ve only seen it once, but they have proven it exists in this world.

Later, as Danny wanders down the street, he sees Mary, the girl he helped in episode one, seated in a coffee shop window. They have a chat, and he advises her to not wander around Chinatown this particular day. The conversation covers a lot of ground, and Danny, showing he’s smarter than some give him credit for, heads off one complication by being sure to tell Mary that he lives with his girlfriend. She doesn’t react to this well, having some kind of near-fainting spell, and kind-hearted Danny brings her back to his place, just around the corner. Colleen is home, fortunately, and Danny introduces them, again emphasizing, “My girlfriend, Colleen.” Mary acts oddly before having some kind of episode in their bathroom and rushing out of the apartment. The scene does confirm that Colleen’s Chikara Dojo is closed.

After Mary’s abrupt departure, Colleen leaves to try and find some more information on the missing Frank Choi, planning on visiting her contact Sam Baird. She offers a few useful suggestions to Danny on the way out about dealing with the Triad issues. This triggers a flashback to Danny and Davos’ fateful duel in K’un-Lun to see who would face Shao Lao. They both get ceremonial masks for the fight, which are pretty much the same mask Iron Fist wears in the comics.

Colleen meets up with Sam, an engagingly charming oddball. Sam decides to call her “Wing” and goes on about how cool so many one-name people are. As they talk, Colleen helps him get the hall set up for some kind of charity fundraiser later that night. Sam’s not comfortable with it, but Mrs. Yang, a big supporter of the charity, wants it to happen. The information Colleen wanted is mysteriously missing, which Colleen finds suspicious.

On her way to her next stop, Colleen gets ambushed by the same punk kids she’s crossed paths with a few times now. She turns the tables on them, then follows them back to their urban Lost Boys’ hangout. Undeterred by their attempts on her, she offers them help, and bonds with a younger one known as “BB.” Possibly bragging to impress Colleen, BB passes on some information.

In the fish warehouse we’ve seen before, Danny goes to meet Mr. Yang, and plead for peace. Yang explains the situation between his group and the Golden Tigers. The armored car robbery Danny foiled in episode one was a part of their ongoing hostilities. Danny pleads with Yang to sit down with the Tigers and find a way to avoid open warfare. Danny undercuts his own overture for peace when he loses his temper in an impressive way. This flashes Danny back to the duel with Davos, which is bloody, brutal, and savage.

Back in the present, Ward has a meeting with a new assistant. We learn that Ward is very concerned about what Joy is up to, and is taking his temper out on his employee, but is at least self-aware enough to apologize for it. Katie, the assistant, managed to learn where Joy would be later tonight, and Ward is impressed. They banter about ways to describe his schedule if anyone asks.

Joy herself is busy at an auction with her friend Mika. Mika seems fascinated by Davos, which Joy warns won’t go well. Ward turns up, and Joy is far from happy to see her brother. Ward, to me at least, seems sincere in his offers to help her with her current project, but Joy isn’t going to listen to him. That’s one family that’s not getting back together. Davos comes over to make sure Joy is all right, and there’s clearly no love lost between Davos and Ward. Later, in a back room, we see why Davos and Joy are there, and they try and impress on Mika how serious they are. Mika isn’t really getting their urgency, and Joy has to dissuade Davos from doing something drastic.

Colleen and Danny catch up at home, sharing notes on their days that weren’t as productive as either had hoped. Colleen has some admirable compassion for the kids she was dealing with earlier, but that’s what her dojo used to be about, at least in part. She makes a suggestion to Danny about another way to approach the Yang family. The pair go to the charity event, a casino setup, and find Mrs. Yang. The lady at first pretends to not know what they are talking about, and then listens as both Danny and Colleen plead their case. Finally, reluctantly, she makes a call on their behalf.

Joy has brought Davos and Mika back to her place, and Mika is even less subtle about her interest in Davos. Joy pulls the warrior aside and questions his priorities as she outlines a way to get the woman’s cooperation. Joy is ruthless, and pushes Davos well out of his comfort zone to get what they want.

Danny and Colleen get home, hoping they have averted a slaughter. They don’t have everything they want, but it’s a start. Colleen turns in for the night, leaving Danny to an evening of music and flashbacks. He relives the end of his duel with Davos, and I can see at least some of why Davos is so resentful. As Danny deals with his memories, Davos pays a call on Mr. Yang. Yang has news Davos want to hear, and the young warrior doesn’t take it well. I don’t think this is going to be a good outcome for Yang.

The episode ends on what I believe is the next morning. Colleen’s getting ready for the day gets interrupted by a call from Mary. How she got the number, I’m not sure. Colleen is puzzled by Mary acting so oddly, and Mary hangs up. She has another note back at her place, which she is clearly going to ignore as she folds it up, eyes shining with tears.

What I liked: Danny has matured from first season (I know, I know, low bar). I’m glad he was smart enough to be direct and up front about Colleen with Mary. His desire to keep the Triads from going to war is clear, and heroic. He’s channeling his inner Sun-Tzu: The greatest victory is the battle not fought. Colleen is also a very compassionate person, as seen in her dealings with the kids, and even her reactions to Mary. I like Danny and Colleen together, and I think they’re the only happy couple in the Netflix corner of the Marvel Cinematic Universe. The fight with Davos was impressive, although I don’t quite understand the end of it.

What I didn’t: Joy went from a sympathetic character last season to a budding supervillain this one. I don’t like the alliance of her and Davos at all. I suspect they’ll be feeding the darkness in each other. I’m not wild about Colleen getting involved with the little gang of Lost Boys, but, her being her, I don’t see what else she could do.

I thought it was a good episode. I’ll give it a 3.5 out of 5, and hope the season stays this high quality, if not better.