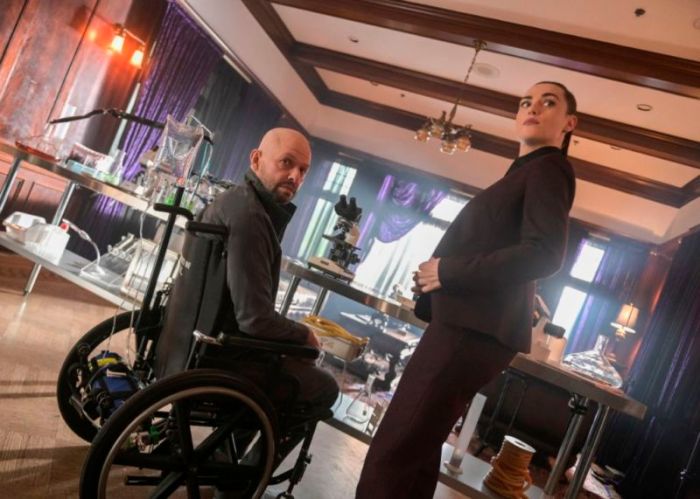 No, no, you’re LEX, not Professor X

A lot of surprises get dished up in Supergirl’s “O Brother, Where Art Thou?” A major character of Superman lore shows up, they follow up on James’ nasty cliffhanger, and a few people are in need of a status update. By the end of the episode, you can see the villains have done a great job planning and setting things up.

The episode opens with a flashback to four years ago in Metropolis. Lex is in the midst of another grandiose plan to kill Superman, and is in full rant mode. Lena, tied to a chair, is his literally captive audience. Lex goes on and on about how Superman is actually bad for humanity, casually killing some cops along the way and evidently not seeing the irony. An appalled Lena is relieved when the police show up, capture him, and free her.

In the now, Lena meets a special police detail bringing Lex to her. She asks him if he was that desperate to see her that he had a stroke (although later it’s said he both has cancer and some form of Kryptonite poisoning). There’s some banter back and forth, but Lex does truly look terrible. As the siblings have a reunion, a mysterious figure, presumably the one who shockingly shot James Olsen in the back at the end of last episode, presses his Superman signal watch and flees. It’s an odd pair of actions, maiming the man and then sending for help.

At Lena’s mansion (the same one they used on Smallville), Lex tells Lena he’s got six weeks left, and she doesn’t seem surprised or moved by the news. He pushes her to use her Harun-El formula on him, and she refuses, not feeling ready for human testing. They bicker about her DEO connections and pulling strings. Eve comes in and Lex continues to be annoying, dismissing her as the coffee girl. In fact, she’s there to tell Lena about James.

Kara, Brainy, and Nia are at the hospital when Lena arrives. They talk about the seriousness of his condition and are annoyed by him not being allowed visitors. Lena starts throwing her weight around, and Brainy offers her some advice. Alex echoes Lex earlier (I’m sure she’d be appalled) and suggests Lena use the Harun-El on James, but Lena again says it’s not ready for human testing. J’Onn is convinced this is the work of Manchester Black, and is going to hunt him down. Kara decides to go with him, and is forced to tell a lame lie to Alex about where she’s going and why. I really hope that mind-wipe goes away soon. Kara and J’Onn leave as Alex looks on, stunned at Kara seemingly abandoning her friend.

J’Onn and Kara end up at a spot of burning ground, which J’Onn says is where his father died. The flames leap higher, and Kara goes to put them out. This is when Manchester Black makes his presence known, having retrieved the Staff of H’Ronmeer from the ground and using it to slow time for Supergirl and the rest of the world while he baits J’Onn. Manchester apparently managed to make some kind of connection with J’Onn when the Martian used his mental powers on him a while back. Manchester does have mental powers in the comics, maybe this is some echo of them. The man makes some ominous threats from Martian theology and then vanishes.

Lex muses on their mother’s portrait, and Lena is devastated by the news about James. He keeps needling her and she asks for his help. Nia and Brainy take turns blaming themselves for not seeing the attack on James coming, and the surgeon delivers some dire news about James. Just as he asks about next of kin, Kelly, James’ sister that’s never been mentioned anywhere as far as I know suddenly shows up. One of the first things she does is make sure the hospital treat James’ friends like family as far as visiting privileges go, which is nice of her.

Lex and Lena work on the Harun-El cure, while he gives his sister a very slanted version of their growing up together. The guard who has been casually cruel as he’s dealt with Lex gives more of the same, angering Lena. Weirdly, Lex waves this off. J’Onn tells Supergirl a bit about the beliefs of his people, and she offers encouragement to her friend. Lena leaves a message for Alex, gets some concerned cautions from Eve, and finally chases the guard off, demanding the keys from him. Alex and Kelly talk family at James’ bedside, and he codes right in front of them.

The surgeon gives them more bad news, and Alex brings up the Harun-El to Kelly. Alex is hopeful but honest, and Kelly has some understandable reservations. Alex presses her and they both get annoyed. Lena and Lex make some significant progress on their work. Alex calls Kara and lays into her for leaving, giving a mix of news and guilt trips. Lena is on the verge of giving up when Lex tells her stories about a family pet and meeting a relative on a business trip.

J’Onn gets some nasty visions care of his link with Manchester, and Kara helps him break free. J’Onn is torn about what to do, and Supergirl offers some perspective. Alex apologizes to Kelly and they bond over Jell-O. Kara comes in and gets hugs from Kelly and glares from Alex. Kara apologizes and they hug. Brainy has an argument with a vending machine, and gets two Easter Eggs in the same sentence. He talks about Chocos, a cookie that J’Onn likes to the point of having a problem with them in the comics, and talks about usually getting on well with machines, which is possibly a nod to Computo, a rogue AI he creates in his time. Nia ends his self-pity string by kissing him, which I, and likely others, have been waiting for. As they kiss, the lights flicker everywhere, startling them. J’Onn uses his power to determine that Manchester is at the dam that powers the whole city, something else I don’t think we’ve heard about before this episode.

J’Onn and Supergirl race to the dam, which Manchester is blowing holes in with the staff. Supergirl goes to tend to the dam while J’Onn squares off with the annoying Englishman. The power failure is also messing with James’ surgery, and Kelly realizes they need to try Lena’s wonder-drug. While the heroic aliens deal with the dam problems, Lena shows an interesting mix of ruthlessness and compassion when she takes over the operating room. J’Onn gets pushed too far and ends things with Manchester, but recovers something important.

James responds well to the drug and he wakes up, telling Kelly she didn’t have to come. They banter about his friends, then everyone flees the room when his mother returns Kelly’s call, leaving James to possibly wish he was back in his coma. Supergirl and J’Onn talk. He’s very unsettled about what happened at the dam, and gives Supergirl something to give to someone else before flying off. Brainy and Nia have a strange relationship scene that deals with emotional stress and movie quotes.

The episode ends with a series of nasty surprises for one of the characters. I’m going very vague to avoid spoilers here, so I’ll just say that the writers harken back to some early DC movies. Some of the reveals here don’t make a lot of sense given the histories of the characters involved, but I’ll give them points for shock value and twists. I didn’t see any of this coming.

What I liked: I admit, I had my doubts about Jon Cryer as Lex Luthor, especially with his history in another part of this franchise. I was wrong. He was perfect. A few of the reveals centered on his character showed the perfect mix of sociopathy and genius Lex is known for. I’m hoping this means we’ve seen the last of Manchester Black, but I’m not confident in that. Any episode without both Hayley and Lockwood is good in my book. While I don’t like the mind-wipe and its continuing repercussions, Alex’s reactions in the context of it made sense. The final scene had some truly unexpected surprises. Hopefully Supergirl passes on what was given to her soon so we can stop hearing about that.

What I didn’t: I’m not quite sure I understand what happened with Manchester near the end. I don’t know that we needed to give James a new relative suddenly. I’m hoping whatever aftereffects happen from his injury, we see him suit up as Guardian again soon and preferably back with Lena. I was hoping for a Brainy/Nia relationship and I don’t like what they did here. As I said above, some of the reveals near the end didn’t quite work.

I enjoyed this episode more than many lately, and the total absence of the Children of Liberty and their related plotlines might have played a big part in that. I’ll give this one a low 4 out of 5.