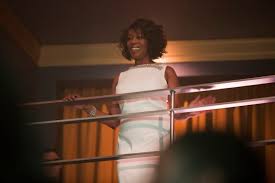 She really does enjoy looking down on people

Luke Cage’s second, and sadly final season moves closer to completion with “The Creator.” The episode is mostly about repercussions from Mariah’s shocking act at the end the previous show, and filling in some background on the Dillard/McIver feud courtesy of Flashback Theater. While it’s a good episode, rarely for Cage, there’s a lot of talking and not a great deal of anything else.

The episode opens with Misty, Luke, Tomas, and a horde of cops amid the slaughter at Gwen’s Café. Luke is bitterly regretting his efforts to save Mariah’s life so many times, while Misty tries to comfort him and Tomas insists it could have been someone else, which I don’t think even he believes at this point. Tomas is worried about what the supervisors are going to say if they show up with Cage on the scene, but Misty isn’t worrying about that right now, and I don’t blame her. After more examination and discussion, our heroes work out there’s probably a survivor of the slaughter, and set to work identifying and finding them. Tilda is trying to save Bushmaster’s life after his extensive injuries, while his number two man, Sheldon, urges Bushmaster to fight.

In the first of several flashbacks to 80’s Kingston in Jamaica, we see younger versions of both sides of the McIver/Stokes feud having a meeting that goes nowhere. There’s even a cocky, swaggering Ben Donovan along as Mama Mabel Stokes’ counsel. In the present in Harlem’s Paradise, Mariah is impressed with some of the club’s upgrades, including some special armor for the walls from Atrius Plastics. Shades is a lot less happy about things, sickened by the slaughter at Gwen’s and Mariah being so blasé about it.

Misty is working her scene re-creation magic when Luke breaks her concentration. Before they get to arguing about it, Detective Tyler comes in with information about the victims at the Café, and ownership records. They figure out Anansi owned the place, and his wife Ingrid is not among the bodies. Luke is urging action while Misty is being more cautious and trying to build her case. Luke tells her his way is faster and has less red tape, and we get to see several scenes of him shaking people down for information. Luke proves to his own satisfaction that the “It might have been someone else” story doesn’t hold up. Luke and Misty argue over what their goals are, and he ends up hanging up on her. Deputy Chief Ridley pulls Misty aside to let her know the case is getting media attention; they’ve dubbed it the “Rum Punch Massacre,” and Karen Page, of Daredevil and Punisher fame, is calling for comment about a survivor. How exactly she got that information I’m not clear, but it rattles Misty and Ridley.

Ridley has plans for Misty, and the detective isn’t pleased about being pulled off the streets because of them. She does a good job at a press conference, dodging questions like a veteran politician, and her voiceover serves at the backdrop while Luke seeks more answers and we see Shades is more shaken by everything than we had thought. He and Mariah have a tense scene as she demonstrates how much further into the darkness she has slipped.

Misty, using a combination of good detective work, excellent memory, and a hunch, starts connecting part of the café slaughter to a case that’s been bothering her for a while now. Bushmaster is going into spasms, not reacting well to the nightshade substitute that is all Tilda has to work with. She tries to get answers about Bushmaster’s medical history out of Sheldon, but the man seems allergic to simple, factual replies. All this triggers another flashback, wherein we see one of the events that shaped Bushmaster’s life, and just how much Mariah favors Mabel. Slipping back to the present, Tilda is shocked by this story, horrified over what her family has done.

Misty makes progress on her case, while Mariah takes a meeting with Mr. Yang, a heroin dealer who is surprised to hear from her, since the Stokes clan’s pretty much one rule has been no drugs. Mariah pushes ahead with a good sales pitch, and she and Yang come to an agreement. Luke, tipped off by a friendly nurse, is looking for Ingrid in some off the books clinics. He finds her and some of Mariah’s thugs, which goes about as well as any conventionally armed man going up against Cage does. After some initial suspicion, Luke convinces Ingrid he’s on her side. Luke briefly loses her in the chaos of a big Carnivale-styled parade, and we see just how much everything is getting to Shades. The traumatized gangster flees the scene, and Luke tries to convince Ingrid to go to the police. The older Jamaican woman isn’t having any of it. She also makes an observation that unsettles Luke.

With tight cuts back and forth from more flashbacks and the present, we see Bushmaster dealing with injuries with some unusual help in both instances. His history with nightshade goes back a good long way. It shows some more of the family’s feud and does some nice dissolves from era to era. Ingrid makes some more observations about Luke and Bushmaster, and makes a tearful request of the hero. Luke reports in to Misty, who is drawing the net tighter around Mariah.

Mariah has a disturbing scene in her office where she argues with the ghosts of her past. The woman has issues. I don’t feel bad for her, I truly believe she’s evil and revels in it, but she is a haunted woman. Bushmaster finally begins recovering and he and Tilda talk about the cost of the treatments, on a few levels. Sheldon is at first glad for his friend’s recovery, but when he makes calls to put out the word, he learns about Gwen’s, and is clearly shaken and saddened. Misty brings her findings to Deputy Chief Ridley and runs afoul of some considerations she hadn’t been thinking of. She gets more bad news when Luke tells her that Ingrid won’t testify and that Luke isn’t going to push her. Bushmaster, Sheldon, and Tilda tour what’s left of Gwen’s, and Tilda is distraught. After some debate, Bushmaster makes a decision that Sheldon disagrees with.

Mariah is getting comfortable in her office with her long-serving assistant Alex, which is about when Shades walks in. Things get a bit awkward and Alex ducks out as soon as he can. Shades and Mariah spar a bit, her being defiant and aggressive, him trying to explain to her there are rules to how things are done and she’s breaking them. Things get uglier and uglier, and Mariah finally pushes Shades too far with her abuse. When she gets really personal with her cutting comments, Shades shows her she doesn’t have the handle on everything she thinks she does, and things end on an ugly note between them. Not content screwing that up, Mariah torches her only other extant relationship within moments.

Misty gets a surprise visitor as she’s leaving work, and it’s something there was no way she could see coming. Grief isn’t wrenching enough, so there’s a really odd scene just about over poor Anansi’s body, as Ingrid and Bushmaster come to terms with their loss, and Luke is alternately an awkward third wheel or having an intense, but restrained, conversation with his most recent enemy. They finally part ways, and Luke runs into Sugar on the streets. Sugar makes a suggestion that Luke seems to be considering, which bodes ill and closes the episode.

What I liked: Much as I loathe the character, I will give Bushmaster credit for his talk with Luke, and Luke points for not pushing the issue to let Ingrid grieve. Luke is a good man caught in a really bad place and is doing the best he can. I feel sorry for Misty getting so many distractions and roadblocks in her way, but she keeps pushing forward. Shades is being faced with difficult choices too, and I think he’s doing the least wrong thing in his lights. The casting of the younger versions of the characters was amazing.

What I didn’t: I’m not really sure the flashback scenes served much purpose. We knew the vast majority of what happened in them already, and they’d pretty clearly painted Mabel and Pete as evil. They could have cut at least some of that. Mariah is just a vile creature who needs to get put down as badly as Bushmaster does, maybe more. At this point, so far barring Tilda, the entire Stokes line needs to get rooted up and burned. I do not at all blame her for leaving, but I keep wishing Claire would come back.

It was a really interesting episode with twists and turns aplenty. I’ll give it a 4 out of 5. It’s really too bad the Netflix/Marvel world is ending, they’ve done so much good work.