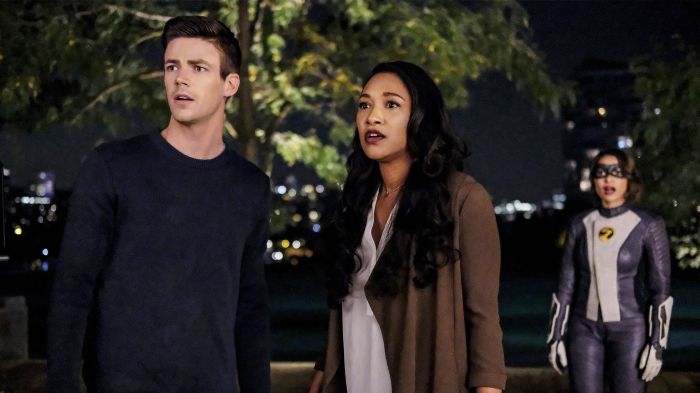 Seriously, Ralph, what the hell?

Flash adds to his Rogues Gallery in this episode, as we see a new use for the phrase, “All Doll’d Up.” The show opens with Iris, frustrated, commenting that Nora had been ducking her calls for two weeks. Honestly, with the revelation about Future Iris suppressing Nora’s powers and lying about it, I don’t think I’d want to talk to her either. Barry’s offering support gets interrupted by an alert about a daring daylight art gallery theft. The thieves are a pair of motorcycle riders who pass off the stolen artwork. Flash stops the one without the picture, and XS shows up and stops the other after Iris orders her not to. XS is as rash as ever, endangering bystanders with her takedown, although, in her defense, a motorcycle that falls over doesn’t usually explode.

Back at STAR, Iris lectures Nora about not training and not thinking. Nora finally blows up and does a rant about what Iris does to her in the future, and there’s a lot of pent-up frustration there. Iris stalks off angrily, and Barry, shaking his head, asks Nora to think about things a bit differently. Elsewhere in the building, Wells, Ralph, Cisco, and Caitlin plot how to try and find and stop Cicada. Personally, I think that’s a lot more important than Iris and Nora’s mother/daughter issues, but I get the emotional involvement. Caitlin also admits they’re at a dead end on finding her father, Thomas, and everyone once again bemoans the loss of their satellite (now called Sally, which I think is new) during the end of the battle with DeVoe. Cisco uses his powers to try and find Thomas, and hides the ugly side-effects he’s suffering now.

A happy couple talks about their upcoming wedding, and the stupidly expensive necklace he’s going to give her tomorrow. This is, of course, the cue for the villain of the week to pop up. Rag Doll was a minor character in DC Comics for a long time, brought to slightly more prominence when he became part of Gail Simone’s Secret Six (one of my favorite comic book runs of all time). Here, he’s definitely a slightly different character, and they made him more complicated by having him dually played: body by Troy James, who was one of the scuttling nightmares on The Strain, and voice by Phil LaMarr, who was Green Lantern on Justice League Unlimited as well as many other voice credits. The theft gives a rough idea what Rag Doll can do, and freaks out the bride-to-be to no end. Barry works the case in his actual job as a CSI tech (or maybe Central City’s only CSI tech, the way they act sometimes) and he sees Iris interviewing the couple. Barry proposes a team up and Iris isn’t sure about it.

Nora exults in her freedom at the West house, and has an interesting scene with Cecile. Nora acts like her cousin (in the comics, at least) Impulse and tries to speed through some chores and does it really badly. Cecile calls her on it and offers a unique payment, after reproving her for not respecting Iris. Team Mystery follow up on Cisco’s new lead with a nice call back to the show’s history as their next stop is the office of the late Martin Stein, formerly part of Firestorm on Flash and Legends of Tomorrow. They get a new clue which points to an old myth and that Thomas Snow knew more about Caitlin than he ever let on.

Barry and Iris work their leads together, and she comments about always wanting to have been a reporter (which was never mentioned in the first few seasons of the show). Barry gets a perplexing result back on one of the tests he’s running from the robbery. Elsewhere, a man closes a business deal for a project in Gotham (where the heroes will go in the upcoming crossover) and becomes Rag Doll’s next victim. Flash managed to rescue the man, but Rag Doll gets away and his plan goes off without a hitch. Barry and Iris compare notes and finally get some clues, learning the identity of the “stretchy clown thief” as they call him. No wonder Cisco does the names. Barry is excited about working the case with his wife, but Iris keeps dampening his enthusiasm.

Team Mystery goes on to their next clue, and Cisco hides his pain again…until he gets a massive nosebleed and passes out. Barry and Iris manage to get in to a big charity gala through unknown means, dressed very fancy, and get some more background on Rag Doll. Barry is again playful and romantic, and Iris is still withdrawn and moody, brooding about her situation with Nora. Barry gives her some very simple, practical advice which she’s really not in a frame of mind to listen to. The scene ends on an ominous set up for Rag Doll finding his next victim.

Caitlin examined Cisco while he was out cold, and has some grim news when he wakes up, much of which he already knew. He’s frustrated with his powers being so limited now, and she offers a peptalk about his many non-powered accomplishments. While she makes him feel better, it points out a few things about the show that don’t really make a lot of sense, like how they should all have some better weaponry, especially to make up for Caitlin’s own power loss. In the loft, Iris bounces back and forth between being stumped on the Rag Doll case and at a loss over what to do about Nora. Barry finally goes to bed, leaving her to brood, although she does get an idea to follow up on.

Nora and Cecile talk about stories, and Nora finally figures out what Cecile has been hinting at. It’s a nice moment for them, and gives Nora some insight she’s been lacking. At the loft, Barry rummages in the fridge, making the classic mistake of ignoring something he heard to chat with Iris on the phone. In a reversal, Barry becomes the one who gets kidnapped when Rag Doll takes advantage of several careless choices from the heroic couple. Iris rushes to STAR for help, because I guess a phone call wouldn’t have been faster? They finally find Barry, and the news gets worse. Elongated Man and Iris swing into action, literally, and Iris isn’t wild about Ralph’s new trick. Nora, improbably, left her phone behind when she and Cecile went out, so she doesn’t get the distress call.

Barry wakes up and tries to talk Rag Doll down, which doesn’t go well. We do get an origin story, and Rag Doll is part of the newest wave of metas to plague Central City. Iris and Ralph show up, and there’s a lot of talking before Rag Doll does something rash. Not to be outdone, Iris does something even more reckless, and I think the writers aren’t wholly clear on how Flash’s powers work. It was a cool scene, though. XS gets there just in time to see the end of things. What was probably an interesting battle between Elongated Man and Rag Doll happens off-screen. XS is really impressed with Iris.

The team meets up back at STAR, where Cisco also gushes over Iris’ big play. Cisco dubs him Rag Doll officially, continuing that trend. Nora ducks out to do something, and she and Iris have a bit of a bonding moment over a shared interest. Barry listens in but leaves them alone to finally have a good conversation. Team Mystery gets an idea on how to proceed with the hunt for Cicada (who has a really dominating presence for an episode he doesn’t show up in), and Cisco gets an idea that, while good, seems like it’s a few months late. While they could use this to find Thomas Snow as well, Caitlin hesitates and Cisco tells her to just let him know when she’s ready.

What I liked: I was thrilled to see Rag Doll, even such a different version. Then again, the comic book version wouldn’t really be a threat to Flash, which I admit I was wondering about before I saw the episode. I like Elongated Man’s new way to get around, and Iris’ reaction was priceless. Cisco foolishly pushing himself was very much in character. I’m hoping this doesn’t drag on and leave him without powers for the whole season. I liked Cecile’s way of getting through to Nora. The Gotham mention was good.

What I didn’t: Barry pretty much deserved to get captured the way he did, between making a rookie mistake and being so careless with an important and dangerous high-tech device. Nora leaving her phone behind didn’t really make any sense, considering we saw her on it every other second a few episodes back. Iris going to STAR instead of at least giving them a heads up by phone seemed like it wasted a lot of time in a crisis situation. Cisco’s big idea at the end, as I said, was a few months late.

They’re really pushing hard to retcon Iris into “I always wanted to be a reporter.”

It was a good episode, and they made some progress on several long-standing subplots. Iris was certainly shown as brave. I’ll give it a 3.5 out of 5.