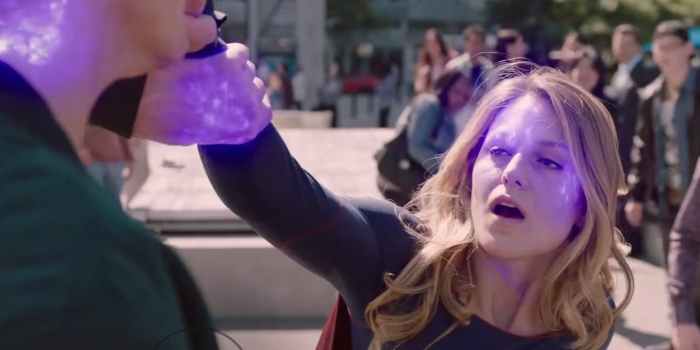 Purple is NOT her color

One of the great things about science fiction is that you can use it to illustrate social issues without being preachy about it. If you do it right, anyway. Supergirl, for most of this season, feels like they’re clubbing us over the head with the idea. That trend continues in “Parasite Lost.”

The show open with some kind of party/gathering in a rooftop garden, now repaired after the damage from the Daxamite invasion. Among the attendees are James Olsen, Lena Luthor, Kara Danvers, Nia Nal, Alex Danvers, J’Onn, and Brainiac 5, who is apparently not doing well with the beverages on hand. He passes out with a drunken, “Long Live the Legion!” He’s definitely taken over Winn’s dual roles of tech genius/comedy relief. Kara talks about getting an interview with Amadei Derros, a famed alien healer. Alex goes to check on Brainy, and comes back with him, totally fine. Apparently Coluans deal with alcohol quickly. Nia asks why he didn’t find her, and he gives an impressive recitation of her personal data. When she asks why he never called, he says through a mouthful of croissant, “You told me to find you, not call you.” A bit literal, Brainy.

Former Agent Jensen is having major problems from the parasite Agent Liberty infected with him. Liberty/Lockwood takes the ailing Jensen to a captive alien to demonstrate the range and lethality of Parasite’s powers. It’s weird that Lockwood, college professor turned hate group leader, knows about all this, and Jensen, former DEO agent (the people that dealt with Parasite before) doesn’t. In the comics, Jensen is the real name of the Parasite supervillain. Agent Liberty calls him an “asset to save humanity.”

Colonel Haley, the babysitter an enraged President stuck Alex with, brings her to a conference room. After an initially confrontational tone, Haley proves to be both understanding and supportive of Alex’s efforts at the DEO. It leaves Alex a bit confused. Kara and Nia go to see Derros, and learn about his power and its limitations (the healing energy doesn’t work on humans for some reason). Derros comes across as a very enlightened spiritual man, impressing both Kara and Nia. Derros talks about his greatest hope being healing the human heart and the recent divisiveness in National City.

Lockwood is on a video blog, ranting about the recent attack on the carnival, conveniently not mentioning his group did it. James watches, and Lena comes in, shaking her head, telling him he needs to stop watching this. I agree. The blog group is called Project Veritas, possibly a nod to the Veritas group that played a part in later seasons of Smallville. Olsen and Lena both remember meeting Lockwood before, and wonder at where he is now. Lena distracts James from worry about Guardian becoming a figurehead for a hate group by telling him he’ll be speaking at a big dinner later.

Brainiac and his various gadgets find Jensen, who interrupts a street performing shapeshifter. They send Supergirl, which is when they learn A) Jensen has Parasite powers now and B) her cape is apparently heat vision proof. Alex shows up with her weapons to blast at Jensen, who escapes via stolen power. Alex brings Haley up to date on both Jensen and the Parasite, and Haley is again surprisingly helpful. Haley approves of Alex’s decision to tell Supergirl to sit this out.

Supergirl doesn’t take the news well, but accepts it. She’ll fight on as crusading reporter Kara Danvers. Jensen barely makes it back to the Lockwood Steel plant, and Agent Liberty vows that his Children of Liberty (I think the first time we’ve heard the name) will find an answer for the power limitations and weaknesses.

Kara’s article comes out, and gets mixed comments. Kara is horrified at the hate speech from some of the posters. There’s a difference between optimistic and naïve. Superman is generally the first. This Kara seems to veer to the second. J’Onn has taken over running Fiona’s former group (what happened to Manchester Black and his gun spree last time, anyway?), and some aliens share stories about not using their image inducers. J’Onn then gets a call that Derros is deathly ill and needs help. He and Kara arrive to discover his special amulet is gone and he’s dying without it.

The alien community doesn’t trust the police at this point, and asks J’Onn to help. J’Onn reads Derros’ mind and gets an image of someone. Using a neat combination of Martian powers and DEO tech, they locate the young woman in question. J’Onn and Kara go to Miss Elizabeth Hawkins’ house, with Kara babbling distraction while J’Onn phases through walls to have a look around. He’s not that good at being sneaky, apparently, and is spotted by mother Natalie. There’s a lot of yelling (fair enough, he broke in without a warrant or anything) and we learn a few things about Derros neither Supergirl nor J’Onn had known. Lockwood reassures Jensen that they have found a solution and will use him as a weapon against the roaches.

Haley and Alex meet back up to scheme about what to do with what they’ve got. Brainy watches and says he can do what they need, while Haley comments they make a good team. Lena and James go to the big dinner and run into Lockwood. There’s a lot of sparring and arguing and self-justification, mostly from Lockwood. J’Onn and Kara continue their investigation and uncover some lies. Going back to the source, they get a different version of events from Natalie, who sides with the Children of Liberty and tells Kara that name for the first time. Meanwhile, well-wishers have gathered by Derros’ place as word of his condition gets out.

Jensen shows up at the vigil and starts killing aliens. Alex responds with a DEO strike team, while J’Onn keeps on his non-violence at the cost of the health and safety of others routine. Supergirl shows up long enough to help evacuate the crowd as the situation grows worse, partially because of the DEO’s gadgets and plan. There’s an amusing bit when Haley recognizes Supergirl’s voice on coms, but doesn’t put together that it’s Kara, fortunately for the secret identity (is that really not recorded anywhere at the DEO? I find that hard to believe).

At the big dinner, James and Lena find out that Lockwood’s poisonous views extend farther than they thought. They hear about the crisis in the city, and Lockwood spins it so that James both has to go help and seems once again like the figurehead of Lockwood’s hate movement. Things get worse inside the force field that the DEO has made to contain Parasite… and a few city blocks. Brainiac works out what’s wrong, and the DEO has a nasty choice to make. Haley is more than willing to write a lot of people off, but Alex does everything she can to find another way. Supergirl stays in the background and helps evacuate people while Alex talks down Jensen. Guardian somehow shows up, getting across the city and changing to his costume and gear in truly amazing time. Jensen finally makes his own choice, and the team manages to save the civilians and Derros. Derros gets to make his peace with one of the things that has haunted him for years.

Back at the DEO, Haley and Alex talk. You know the goodwill that Haley has been building? She gets rid of it all here. Haley lets some of her real opinions slip and it turns ugly. She then goes on a power trip and shows she might well be every bit the dictator Alex (and I) were worried about in the first place. J’Onn relaxes at the alien bar and finds out he may have a new calling, which would put him closer to the classic version of the Martian Manhunter. James and Lena talk, and James is making some really disturbing choices. Kara and Nia talk about a new series of articles Kara has in mind. Lockwood has a temper tantrum and then calms himself when he gets an unexpected phone call.

What I liked: I’m glad Supergirl was mature and smart enough to agree to sit this one out. He could do so much more, but Brainy is at least good comic relief. Alex did a kickass job stepping up as the hero of the episode. J’Onn is being useful while still a noncombatant, even if I disagree with his choice.

What I didn’t: I’m still not sure why Nia is here. She doesn’t really seem to be adding a lot to the show, aside from being Kara 2.0. James deciding to talk to Lockwood makes no sense at all, given his background. I really don’t care for Haley at all. I’m not sure how Guardian managed his quick change/dash across town. They’re beating the analogies to the current political situation into the ground. We get it.

I feel like this show is faltering. I hope they pull it together soon. I’ll give this one a low 3 out of 5.