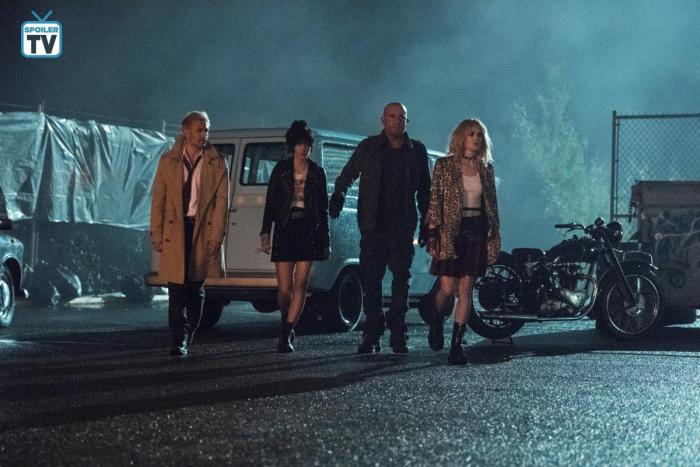 The Legends of Tomorrow continue their brand of entertaining insanity when they have to deal with a “Dancing Queen.” When the Queen of England starts acting very… oddly… in 1977, it’s time for the team to pay a visit. Sara is both surprised and disappointed to learn Nate is planning on staying with the Time Bureau for a while. That scene read a little odd to me, since not only have Nate and Sara never been that close, but Sara has been outright exasperated at the man many times.

Aboard the ship, Ray has made a new housing for Zari’s totem, taking away the last thing that tied her visually to the character Isis she was based on. The new mounting is useful, as you’d expect coming from Ray. They talk about his letting Nora go, and Ray misses his best friend Nate. As they plan the mission, Sara makes it clear she wants to keep John Constantine away from the Queen, which probably isn’t a bad plan. The band that seems to be the magical menace near the Queen is a punk group called The Smell. Constantine is suspicious right off the bat since he doesn’t know who they are, and that was very much his scene.

They decide to go to the club and see what they can learn about the band. Ray, wisely, waits outside, since they have already commented everyone left on the ship is a punk but him, and that he’s never broken a rule in his life. Zari, knowing better, rolls her eyes at this. In the club, tensions between Mick and John erupt once again, this time to an actual fight, which becomes a bar brawl. The band flees when the cops show up, and hop in Ray’s van, making him the very unlikely getaway driver and inside man with the band.

Constantine gives Ray some suggestions on discovering who might be what, and then he and Mick bicker more. John storms off, and Sara sends Zari to keep an eye on him. Then she turns her attention to Mick, trying to get him to stop causing an ongoing rift on the diminished team. Being the leader of this group has never been an easy gig, but I think even Sara is in for a hard time with this set of characters.

Nate begins to realize what he let himself in for at the Time Bureau. Already sick of the mountains of paperwork (and when did he become an expert on magic?), he watches Gary do some horribly awkward flirting with Mona the taco girl. Ray begins his horribly inept attempt at going undercover with The Smell, and it goes about like you’d think Ray mixing with a bunch of hardcore punks would go. At least one of John’s tests proves useless.

Gary gets an alert from the distant past, and talks about writing reports. Nate suggests a more hands-on approach, which of course is going to go perfectly well. Ray and the band go to St. James Park for more mayhem. Ray pulls off a very unlikely stunt, with Sara and Mick helping in different ways. The band, who are debating stealing the van, are stunned at Ray’s triumphant return. He goes through an initiation with them, and then Charlie, the leader, says something that really strikes a chord with Ray.

John is in a pub, no surprise there, when Zari finds him. His newly issued Legends commlink has a tracker in it. Zari makes a few comments and then gets a huge surprise when she finds out why he’s there. In the distant past, Gary compares Nate’s losing Amaya to his own short-lived affair with Constantine. They find some danger on their field trip, and either Nate or the writers completely forget he has powers that would have handled the situation easily. Ray checks in with Mick on a bench in the park, which is pointless with the commlinks they have.

Zari and John talk more, and she gets taken aback by learning more of his tragic past. John is in for a surprise himself when he tries to change his past and the most direct time paradox we’ve seen on the show kicks in. Afterward, he almost shares whatever his current problem is with Zari, then stops suddenly after a nasty flashback. Ray’s cover with The Smell is blown, but not at all the way you’d think, and it’s another spin on the episode title. I give the writers points for this little Easter egg. Charlie makes a great speech about who you are now being important, and Ray nods along, feeling a conflict about his mission starting.

Gary gives Nate some surprising news and a gift, while Ava plays unintentional straight man (double irony there) to their escapades. Gary is a very lazy worker, and his gift looks really familiar. Charlie and Ray have a talk as he sort of tells her about what’s going on with the team, and she shares some secrets about herself. Ray reluctantly reports in, and his big heart causes some debate with the team about their objectives here. The team shows up to take her in, and a lot of surprises ensue.

Nate tries to figure out what is happening with Gary and Mona, which gets weirder when Gary does something that makes me wonder how many times this has happened before. Then, the comedic other shoe drops for the sequel to their foray into the past. The team fight at The Smell’s hideout (where did the rest of the band go?) comes to a surprising end, and Constantine does something that freaks out Charlie and sets up for a few problems. Ray bickers with Sara and finally tells her about his freeing Nora, I guess to make things even more tense and/or confuse the issue. Sara is stunned. Constantine reveals a surprise about what he did as Charlie lashes out from the brig they have her in.

The episode ends with Sara going to get some advice from Nate, and finding out something that makes the current situation worse. Ava comes in to see destruction and chaos, and gets dragged out on a date. Zari and John bond over a picture and her not doing some things. It appears this is, if not a complete two-parter, at least going to have some hanging plot threads and issues that carry over to next episode.

What I liked: The show has some engaging silliness that just really appeals to me, even with some ongoing flaws. I’m really starting to feel bad for Sara: her team is shrinking and fracturing and she’s supposed to get things done. The Gary/Mona bit was interesting. I’m very glad they used Anjli Mohindra for Charlie; I enjoyed her work on the Sarah Jane Adventures, and any Doctor Who reference/crossover on a time travel show is a good thing in my book. While I think he’s getting more than his share of screen time, Matt Ryan is doing a great job with Constantine. I like that Ray is still a very good man determined to do what he thinks is right, but is also still so polite about it. It was good to know he has a failsafe in his ATOM suit.

What I didn’t: I mentioned the pointless park meeting. They need to just take away Nate’s powers if he’s never going to use them. Why is he the expert on magic for the Time Bureau? This would have been a great chance to work in another DC magic character, and there are so many of them. The way the ATOM suit was used didn’t really make sense if you think about it.

Looking at it rationally, it was a flawed episode. If you’re devoted to rational, you’re watching the wrong show. I’m still having a ball with this silliness, and I’ll give this a 3.5 out of 5. And I’m so glad they ditched that opening voice over that never really worked.