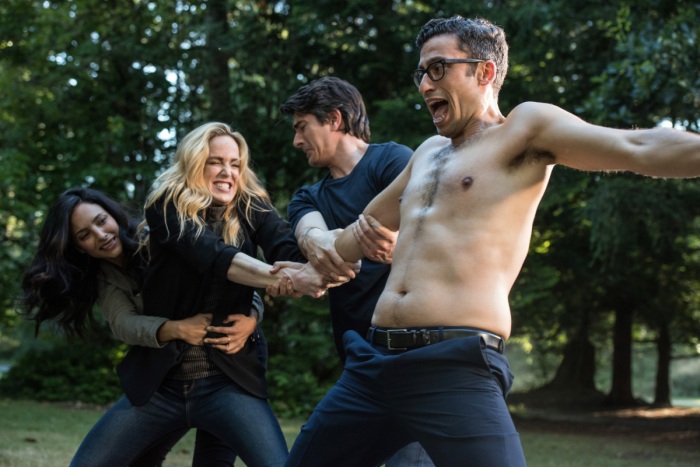 DC’s Legends of Tomorrow return for the fourth season, and without the voiceover that never really worked for me, in “The Virgin Gary.” The episode starts with a fun little bit, as the team deals with Paul Revere showing up at a very different British invasion in their own unique fashion. Later, aboard the ship, Nate toys with a souvenir he picked up as most of the team complains about being bored. Sara just shakes her head at their moping about not having to fight huge monsters or major evil villains. Sara is adamant that the warning we saw John Constantine give the team was wrong, and that they’ve done something really good. Ava Sharpe pops up via hologram and suddenly, formally, and mysteriously summons the team back to Time Bureau Headquarters in Washington, DC.

The team gets a surprise, although not one any of them saw coming. They are definitely getting on better with the Time Bureau than they used to. Maybe that’s just easier without Rip lurking in the background with his own shadowy agendas. We do hear that Wally/Kid-Flash is off taking some time for himself, explaining his absence. There’s a huge party with celebratory drinks, a romantic getaway, and Zari trying to make Ray feel better about Nora Darhk being wanted by the Time Bureau.

Sara and Ava have a lovely evening almost to themselves with their relationship taking another big step forward. The champagne gets interrupted by the sudden appearance of John Constantine, bearing cryptic warnings that Sara doesn’t want to hear. Their conversation turns a bit more personal, and then Ava shows up, even less happy than Sara to see John. John leaves, with something to remember him by on the kitchen counter. Sara isn’t pleased when the “gift” starts doing things.

Nate and Mick make an unlikely pair as they ditch the party for a night of larceny. Mick is disappointed when Nate picks out where they are going, and it ends up being a lot less of a challenge or excitement than Mick hoped for. The former master thief, who seems to be losing his touch without his partner Snart, does get consolation sandwiches as Nate faces something from his past.

Sara rouses Gary from his drunken stupor to start running checks, just in case John was right after all. They find something off at Woodstock. Ray gets a similar result aboard the Waverider, and tries to sneak off, joined by Zari. Her knowledge of the past is still very incomplete, and she’s not sure what a “hippie” is. Zari and Ray get to the famous festival, and find something, but not what they were expecting. Things take a dark turn in the woods, and Zari suspects an old enemy.

Nate’s visit is going badly on several fronts, although Mick is just fine, when they learn of a new anachronism. Ray searches the festival and finds a lot of interesting things, but not what he’s looking for. Sara ends up on the coms, surprising Ray and Zari. Then Nate joins them, sharing what he learned at his stop. They have a lot of work to do. They end up reuniting after some clever graphics on screen. Then something unexpected pops up, and Nate comments that this time, they screwed things up for the more magical. Things take a sudden, ugly turn, leading one bystander to re-examine his wardrobe choice.

They try the simple way of having Mick burn their problems away, but the new adversary is distressingly fireproof. Their foe displays some new and unexpected abilities, with side-effects Mick can’t stand. Sara wants to take care of things themselves, so she doesn’t disappoint Ava. As the others set up for their new task, Sara goes in search of their cranky, alcoholic wizard.

In 2018, Sara finds John, who is busy with something not magic or combat related. She persuades him to help by telling him what they’re up against. He makes some interesting comments about what the team will be dealing with from earlier. Mick and Nate compare childhood traumas, and then a very Woodstock-appropriate effect kicks in, sweeping through the team. Zari and Ray’s side trip is particularly amusing. Sara and John return to Woodstock as John figures out some of what Sara isn’t telling him, or someone else. The pair also debate opinions on teams, friends, and loved ones.

John has a very unique item from his bag of tricks, and the items needed for the spell he’s working on send the team to Jimi Hendrix, Jerry Garcia, Janis Joplin, and Gary from the Time Bureau. It makes sense, in context. Well, as much sense as most of the Legends’ plans do. Gary is thrilled to be part of the team, even if temporarily. He’s a lot less thrilled when he sees what’s being asked of him. Sara keeps trying to persuade John to join the team, and he continues to be dark and grim, even for him. Weirdly, as they prepare their trap, Ray has switched from the one scene he wore his ATOM suit back to civilian clothes for no reason.

The trap sort of works, then goes sideways as John incants his spell. Gary almost gets dragged away with the enemy, and the team ends up in a tug of war to keep him in place. Not only would Ray’s suit have been useful here, but so would Nate’s powers, which he never uses this episode, and he doesn’t show up to help Gary. Gary is injured as the trap finally works, but John talks him into believing it’s a badge of honor.

As the episode starts to wrap up, Nate goes back to finish his earlier talk and maybe makes some progress. Ray and Zari share regrets and she shows him something that’s been tempting her. That scene also carries some undertones of part of the current real world political situation. Ava and Sara share some honest talk about their relationship, and for once, that doesn’t end up in a major fight or a stupidly written breakup. I approve. Sara goes to visit John, who is surly and unwelcoming. She leaves in disgust. After she goes, John has a shower, a musical number, an unwelcome guest, and a cryptic threat.

What I liked: This show is possibly my favorite of the CW/DC shows. I enjoy the off-beat adventures of this band of misfits. I’m liking Sara and Ava’s relationship. It’s always good to see John Constantine, even if he is crankier than usual. The bits at Woodstock were really entertaining, as is Gary’s ongoing geekiness. The enemy this time was especially entertaining. I’m glad they didn’t have the voiceover.

What I didn’t: This show has constantly had issues with justifying (or failing to) why some of the members don’t use their powers. In this one, Zari never uses her Totem, Nate never steels up, Ray’s suit is used as comic relief but not in combat. Gary got injured, but didn’t show the injury he really should have had.

I’m glad they’re back, even if they’re continuing some of the problems of past season. I’ll give this a 3.5 out of 5 for pure entertainment value.