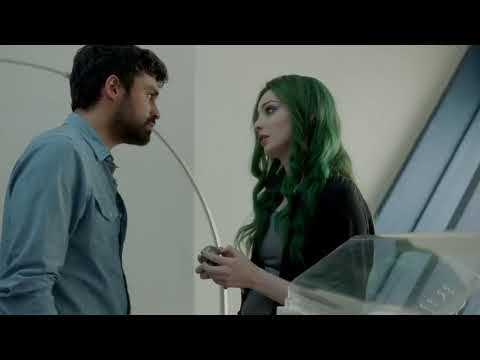 These custody exchange weekends are so awkward…

Things aren’t getting any better for the good guys, as we see The Gifted dealing with “coMplications.” The show opens with some of Marcos’ background, back in Bogota, six years ago. It gives some good insight into his family situation, and why he’s so desperate to reunite with Lorna and Dawn. He hasn’t had the best luck with family, Marcos.

In the present, we find out more about what’s going on with Dawn, and Lorna has an idea how to cure her. The Stepford Cuckoos are less than thrilled about the plan. The doctor says he’s done everything he can for the baby, and then Reeva unexpectedly supports Lorna. She’s thoroughly evil, but she’s very unpredictable, Reeva.

Marcos wakes up looking a lot the worse for wear after last night. He staggers in to the kitchen area as John/Thunderbird and Clarice/Blink are discussing their plans to go track down Erg, the man Evangeline pointed them at. Marcos offers to help, but gets turned down firmly by both the others. Blink gets a great line about drunk dialing your ex. After Marcos goes on his way, Clarice expresses her concern to John about his recent spate of not sleeping and the bruises on his hands. Bearing in mind his powerset, it takes a lot to hurt Thunderbird. He clearly doesn’t want to talk about it, and Clarice reluctantly accepts that, for now.

Reed stares at himself in the mirror, flashing back to his recent power flareups. Shaking himself out of it, he tells Kate that he needs to go up to Baltimore for a medical supply run. Kate, after apologizing for her really unkind words the night before, presses for him to take Lauren along. After some back and forth, he agrees.

At the Inner Circle’s base, Andy visits Lorna, concerned about her plan for Dawn. Lorna reassures her young friend, and they speculate about Dawn’s future. Marcos’ self-pity party in a diner gets interrupted when the Stepfords show up. Lorna’s plan involves Marcos visiting and using his powers to help Dawn. Of course, Marcos is more than willing to sign up, even if it’s a set of very untrustworthy mutants making the offer. While Marcos gets the hood on the head treatment, Reeva finds Andy, interrupting his gaming to lay out her expectations of him. She knows she’s asking a lot, and at least acknowledges it.

John and Clarice make their way down into the sewers in search of Erg, and Clarice is far from happy about the location. John, with some help from his tracking power, figures out one of the secrets of the sewer-labyrinth. Former agent Jace Turner, clearly having domestic issues, continues his crusade about the mutants, traveling to DC to offer his help to the police. He has some trouble convincing them, but is very determined.

Reed and Lauren are coming back from their road trip, Lauren also apologizing for the argument last night. Kate calls with an ill-timed check-in and a question about some stuff that disappeared from their place. Reed is still trying to cover up his powers, but that becomes impossible a few moments later, with not such great results for the car. Lauren is understandably shaken as they gather their supplies up and run. Lauren isn’t thrilled with his hiding his powers, and lets him know it as they flee.

John and Clarice wander the sewers, something interfering with his powers. Clarice gets clever with her own abilities, and finds them a way through, although they don’t end up in the best situation. Jace shares his research with the police, although the man he’s talking to is incorrectly called “Sergeant,” while wearing Lieutenant bars. Someone screwed up in there somewhere. Jace and the police make an unofficial deal, and he overhears some radio chatter about Reed and Lauren’s incident.

Marcos gets to the Inner Circle, and isn’t in the most gracious of moods, although that’s understandable. He gets an unpleasant surprise from Andy, and then finally gets to see Lorna and meet Dawn. It’s a really nice scene as he picks the baby up, listens to the doctor’s worries, and then uses his power to help her.

Down in the sewers, John explains some of the limitations of their situation to Clarice as they get escorted to see the Erg in charge. John makes his pitch, invoking the X-Men, Mutant Underground, and Evangeline. Erg isn’t very impressed, and ends up deciding to talk to Clarice, not John. As part of their getting to know each other, he starts to show her around.

While the cops work the scene of Reed and Lauren’s crash, Jace talks to what they have for witnesses, which isn’t much. He notices something the police missed and sets off on his own, while Reed shows a few new skills and he and Lauren barely get away in time.

Blink is impressed with Erg’s tour, and you can understand why he’s amused at John’s group using the name “Underground.” He is, in fact, leader of a group of mutants calling themselves the Morlocks. The name comes from two places. Originally, the Morlocks were the exploited workers in the distant future in HG Wells’ classic sci fi novel The Time Machine. Later, Marvel borrowed the name for a large group of mutants who lived underground, although in the comics they were under New York, not Washington, and led by Callisto (and later even Storm for a time), not Erg. Erg’s philosophy has some appeal to Clarice, and he offers her a deal for his help.

In something of a reversal, Lauren is acting a lot more like a sensible adult than Reed is. After pointing out that the man with the disintegration touch shouldn’t be driving, she then shoots down his idea of keeping these powers from Kate. She tells him a disturbing story from a few years ago involving both her powers and secrets, and wonders what would be different if she hadn’t kept things from Reed. Reed is stunned by the revelation and reevaluates his outlook.

John impatiently waits, and Clarice finally joins him after her talk with Erg. It was a little odd to me that, considering how much she didn’t like the sewers, Clarice starts walking out with John, not using her portal power to get out. In the lair of the enemy, Marcos’ power cures Dawn, so that part goes well. The rest doesn’t, as they try and tell him he has to go, and he really doesn’t want to leave the woman he loves and his newborn daughter. He gets told he can’t stay, and things escalate badly. We do learn a bit about the Cuckoo’s powers, Reeva’s abilities, and Andy’s loyalty. There’s also something said that makes it a lot more understandable why Lorna changed sides, which has been bothering me since it happened.

Jace returns to the police station, and gets a lot of unwelcome news at once. He’s a bigot fueled by hatred, even if that’s understandable to a point, but I do almost feel bad for him at the moment. John has a lot on his mind, between the lead they got from Erg and wondering what happened between Erg and Clarice. Having caught it from Reed, I guess, she decides to start keeping secrets from her significant other. John shares some of what’s been bothering him with Clarice, but they get interrupted when Marcos staggers in, although for a very different reason than the first time this episode. He’s definitely not in a peaceful mood.

Reed has a long overdue talk with Kate, bringing her up to date on what’s happening with him. She’s not happy he hid this for as long as he did, but seems to understand. Lorna uses her powers to show Marcos’ gift to Dawn, and is happy her girl is well again. Reeva asks some pointed questions to the Cuckoos, and then goes on about her vision of the future, which doesn’t sound like it’s going to be good for anyone who’s not standing right next to her.

What I liked: One of the things I enjoy on this series is the creative use of the powers. Marcos, to an extent, did that with Dawn, but I was a lot more impressed with Clarice finding the way through the sewer maze. I don’t like Reeva, but she’s certainly committed to her cause, and even more powerful than I first thought. The possible explanation for Lorna’s shift in loyalties both makes a lot more sense and is very in keeping with Reeva’s character. I’m glad Reed’s secret is out.

What I didn’t: I get he’s a kid, but I’m disappointed in Andy. Hopefully Reed’s secret and Kate’s obsessions are both done. As I mentioned, I’m not sure why Blink didn’t portal out if she didn’t like the sewers so much, and I don’t like her keeping things from John. What is it about these shows that makes it so people feel the need to hide things from their nearest and dearest? Reeva’s coming revolution sounds like it’s going to be really bad.

It was a decent episode, my quibbles above to one side. I’m not looking forward to the inevitable clash between the Circle and the Underground, but it should be a good story. I’ll give this a 3.5 out of 5.