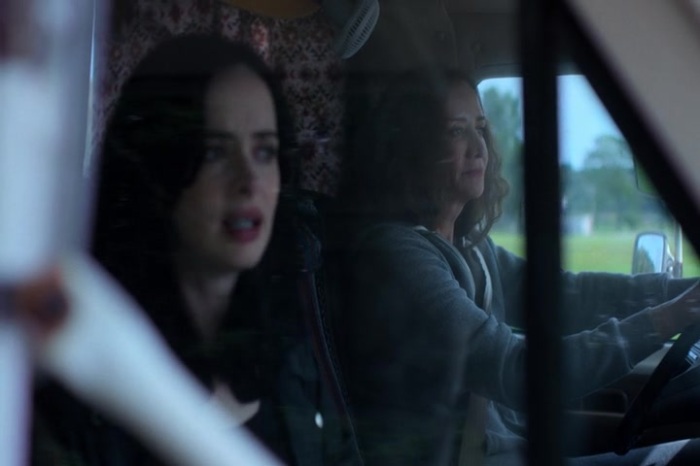 Family vacations can be very stressful

This is a season finale so there will probably be some spoilers along the way. Be warned if you haven’t finished Jessica Jones, Season 2.

Jessica Jones reaches the end of her second season with “AKA Playland.” She wakes to a different kind of morning after, as she slowly comes around from her mother knocking her out. They’re in the camper Alisa stole, and Jessica is both confused and pissed off, although the second one is more a default setting for Jessica. They go back and forth between arguing and Alisa being amazed she didn’t kill Jessica. Jessica is clearly conflicted, but keeps her now-infamous mother from being seen by a passing motorist.

Trish is non-responsive after her own medical crisis, but her mother manages to snap her out of it. The doctor makes a passing comment that Trish used up two of her nine lives, which was possibly a passing reference to her comic book identity of Hellcat. Trish, much to Dorothy’s disgust, is very concerned about Jessica, which Dorothy does everything she can to discourage. It’s a great example of how domineering and cruel Dorothy can be, especially to her daughter.

Alisa and Jessica continue their odd road trip, which is made even more surreal by them both discussing ideas for Jessica to escape. The super-PI admits she feels lost now and has no idea what to do about the mess she and Alisa are in. It’s a rough spot to be in, when your moral code and family loyalty conflict. Alisa calls them the two most powerful women in the world (because Captain Marvel hasn’t popped up yet, I suppose) and Jessica sees a happy family in the car next to them at a red light. Alisa reflects on the problems of super/normal relationships, and Jessica mocks one of Spider-Man’s famous phrases. That’s a nice touch, as, in the comics, Jessica and Peter Parker were classmates before either got powers. Malcolm does a few chores including one that looks very final as he gets a new look.

The Jones family rolls on, and Jessica makes a comparison her mother really doesn’t like. Their argument over Alisa’s morals gets interrupted when they find the family they saw earlier in a nasty car accident. The women spring into action to save the people, but they don’t exactly hide who they are in the process. Alisa nearly gets killed, which shows Jessica how much she still cares about her mother, no matter how mad the powers and process have made her. Jeri does a session with her personal yoga trainer and then gets an unexpected visitor with an interesting offer.

Jessica’s near loss gave her a new perspective, and starts talking about different plans, which thrills her mother. Jessica’s reaction is a lot more subdued than Alisa’s. Jessica has set up a meeting with Oscar, who is appalled by Jessica’s new plans. Oscar is a really good guy and could be a moral compass for Jessica if they stay together. Oscar finds out that he’s being used, and Jessica ends up in a short chase scene, but fortunately her pursuers aren’t that bright. She manages to get back to Alisa in a slightly unlikely way, and they keep moving.

Jeri goes in to meet with her contentious partners at the law firm. It’s a nasty meeting that shows, once again, why you don’t cross Jeri Hogarth.  What I find amazing about the scene is that, despite knowing her and working with her for so long, her partners manage to completely underestimate her. I’d say it’s a mistake they won’t make again, but I’m not sure they’ll get the chance. She has a brief follow up meeting that shows just how ruthless she is, and utterly unsentimental. It’s a bad break for one of the cast, but it makes sense.

Jessica and Alisa keep driving, and Alisa loves the taste of the hero life they got at the accident. Personally, I think she’s more of an adrenaline junky than a hero. Alisa and Jessica debate potential costumes and what they could do to help people. Jessica shows her superior experience to Alisa in how the world works and helps them avoid a problem. Both Jessica and Alisa screwed up, but that lets Detective Costa get hold of Jessica and try and talk her out of this foolishness. Even given his recent loss, he’s still trying to help Jessica. I think Costa is a very good man, and I hope we see him again next season. I do wonder why the cops don’t use a simple app to solve one of their problems. They talk a lot about being in Westchester, which yes, is in upstate New York in the direction they are fleeing, but makes me wonder if it’s a subtle nod to the location of a certain mansion/school for mutants. Alisa gets a bad feeling and looks shaken by her newest realization about her and Jessica’s situation.

Dorothy brings Trish flowers and keeps talking about the future of Trish’s career. Costa comes in and aggravates Dorothy, but then, what doesn’t? Costa asks some questions and tells Trish some things she didn’t want to hear about Jessica and Alisa. Costa leaves on an ominous comment that makes Trish get up from her hospital bed and sneak out. I suspect Dorothy will not be pleased.

Alisa decides to take a sentimental detour and has a conversation with Jessica about being a hero. It’s a good conversation that shows that Alisa truly cares about Jessica, and can show it between spells of her madness. She gives some great advice and tells Jessica some things she needs to hear. The conversation comes to a surprising, shocking finish when Trish takes action to try and save her friend by doing something final and possibly unforgivable. Even in the midst of shock, Jessica takes action to save her friend from the consequences of what she did. Costa and the police show up almost immediately, and Costa again intervenes on Jessica’s behalf. It’s a powerful, stunning scene, but I have to wonder how Trish managed to find them.

Jessica comes back in voiceover mode and talks about how everything and nothing changes. She’s back at work, doing surveillance on someone. Her usual liquor store run develops some complications, and she reluctantly does the right thing. She’s denied even the simple reward she tries for. Trish is waiting for her when Jessica gets home, and it’s not a pleasant chat. I’m not sure what the future holds for their friendship, and it’s made worse for me by understanding both sides of the argument. Trish leaves, and has a run-in with one of Jessica’s neighbors that shows Trish may be a big step closer to her comic book counterpart.

The season wraps with two scenes that set up for the future of several characters. Jeri sets up her new office and starts some hiring. She has a meeting with someone I hoped to never see again, and someone I think is making a (very understandable) mistake. Jessica finishes her business day and goes to have dinner in a surprisingly normal setting. It’s a good scene that, to me, shows Jessica is growing.

What I liked: I continue to be impressed by the series overall. Jessica is showing some growth and change, which I like, and she’s trying to do the right thing. I was impressed by the lengths Trish went to out of loyalty. Detective Costa is a really good guy and I hope he comes back. I’m curious to see what becomes of Trish’s new development. Jeri’s new office opens up a lot of possibilities.

What I didn’t: I’m not sure how Trish was able to find them near the end. Possibly it’s a matter of Jessica told her stories about Playland, but I’d like to have seen that mentioned. I can’t stand Dorothy and think everyone would be better off without her. I miss having Claire in all the series, and there were a few places they could have worked her in.

I’ll give the episode a 4 out of 5, and the season the same. Jessica Jones can be hard to watch; it’s emotionally wrenching at times, but it’s really well done. I still hope the Defenders come back some time, possibly with some new additions.