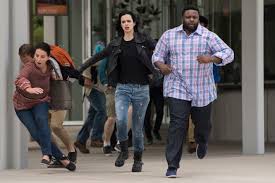 Jessica Jones’ “AKA Facetime” picks up right where “Octopus” left off, with a chaotic scene at the aquarium. Jessica loses Dr. Malus and his mystery super-woman, finds out her phone is doused and dead, but gets a lead to follow up on later. Just to add to the misery, she sees a magazine cover about Trish and Griffin breaking up.

She gets home, cleans up (how do you get aquarium water out of a leather jacket, I wonder?), and her phone comes back to life via the old rice trick. She studies the pictures and gets a clue from something she sees about Malus, while she muses about love in another bitter voiceover. Rattled and alone, she goes over to Oscar’s. She gets some sympathy and then a lot more as they complete something that was interrupted a few episodes ago. It’s one of the more… colorful of this kind of scene on any of the Netflix/Marvel shows so far, I’ll give it that.

Trish gets a night out where we see how far she’s falling and what, to me, seem to be two separate addiction issues. Then again, she’s getting a lot closer to earning her comic book codename of Hellcat. Jessica has an unusual morning after which makes her really uncomfortable and she flees back to her place. Malcolm offers some comments about Jessica’s night and then is a lot more helpful about details on Malus’ ring. You know that old saying about the reward for doing a good job is more work? That’s what Malcolm finds out as we get a bit more insight into his past.

Jeri gets home and has a tense conversation with Inez. We also learn Inez is far from shy. Jeri presses for detail on IGH and Inez is evasive and not particularly helpful. Jeri doesn’t get what she wants and has a hissy fit, which isn’t going to help anything. Jessica meets up with Trish and they go to follow up on the one slim chance at a lead from the aquarium incident. In a weird reversal, Trish makes things worse until Jessica has to calm everyone down. They finally get some information, as well as a commentary on the problems our current political issues are causing. By the end of it, Jessica is getting some really unpleasant deja vu.

Malcolm goes back to a place from his life before Jessica and has a really awkward meeting. Kilgrave really blew Malcolm’s life up when he seized control of the poor man, and we see some of what he lost. Then again, from the looks of the end of the reunion, Malcolm is picking up some of Jessica’s bad habits. That’s not going to help him with anything.

Jeri calls Jessica, and is furious. She want Inez out of her place and tells Jessica so in no uncertain terms. She also pushes Jessica about the information she needs about her partners. Jessica is surprised to hear where Inez is, but tells Jeri she’s making progress. Inez hears all this and goes on a larceny rampage until she finds something out about Jeri that makes her stop.

Malcolm was successful getting information about Malus, and shows Jessica what he’s learned. Trish is looking bad, and Malcolm commiserates, taking her jacket from her and helping her get settled in the office. Trish gives Malcolm some compliments which prompts Jessica to send him home and launches more bickering with Trish. Jessica tells Trish something she doesn’t believe and shows her skills as an investigator by managing to dig up another lead on Malus.

This brings them to a country club where Trish ends up staging a scene at the front gate while Jessica sneaks in another way. She finds a man with a connection to Malus and gets him talking. The man, Ambrose, has a very different opinion of Malus than Jessica does, and some very sharp views on open-toed shoes. He talks a lot, and openly, with Jessica, while Trish pushes her scene too far and starts making a spectacle of herself. Jessica comes back to find her looking a lot worse than earlier.

To no surprise, after Jessica and Trish leave, Ambrose calls and warns Malus. Malus still has killer super-woman with him and talks about it “being time,” because Jessica is on the way. Jessica helps Trish get settled and buys her friend’s lame excuses. I suspect this is something Jessica just doesn’t want to see. Jessica leaves and Trish freaks out, ransacking her apartment for something she lost. Malcolm, back at Jessica’s place, finds it, looks confused, and calls Trish.

Inez has what might be her first honest talk with someone in a long time. She knows things Jeri would prefer she didn’t, but it has made her reconsider a few things. Inez shares something with Jeri that gives the ailing lawyer some hope about the future. Jessica comes home to find a present, and, in a nice nod, it ties in well with something from the comics. It also clearly makes Jessica uncomfortable. Although, come to think of it, I’m not sure how often we see her comfortable.

Malcolm tries to do a favor for Trish and things go very unexpectedly. Poor boy doesn’t know what hit him, although he, too, should recognize the signs. Jessica goes really hardcore to get some more information, and she’s really venturing into dark territory. To her credit, she knows that, as we hear from her next narrative voiceover. She pursues her next lead and finds a place in the country with a few things that are familiar to the viewers. The episode ends with a confrontation between Jessica, Malus, and the mystery woman. Something is revealed I didn’t remotely see coming, and I’m not sure how I feel about it, but it’s a hell of an ending for the episode.

What I liked: Jessica is showing some character development. She’s a better person than she was first season, and I like the changes. It was interesting getting to see more of Malcolm’s past. It was also good seeing Inez isn’t all bad. The episode was blessedly free of both Pryce Chang and Dorothy Walker. I felt bad for the guy that helped Jessica early in the episode. It was a good illustration of the problems with current policy without being preachy.

What I didn’t: Trish is falling fast and hard. Jessica and Malcolm both should be able to see what’s going on. I don’t think I like the very soap opera twist at the end.

It was another good episode in a series that continues to impress me. I’ll give it a high 3.5 out of 5.