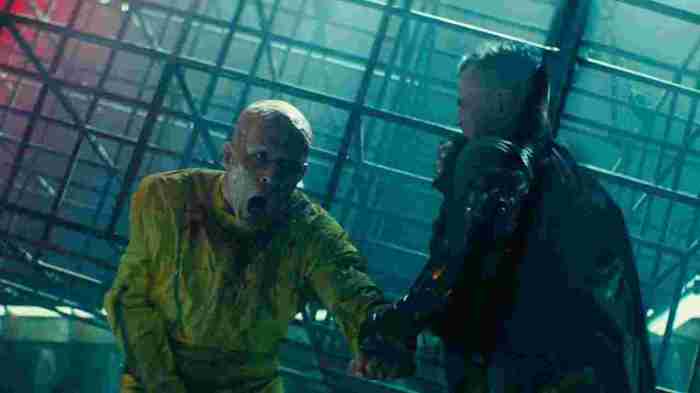 The newest release from the not-actually-Marvel section of the Marvel Universe is Deadpool 2. If you saw the first one, you have a pretty good idea of what to expect. There’s violence to a ridiculously high level, all over the map humor, in-jokes about movies from both Marvel and DC, lots of death, and a lot of breaking the fourth wall. Oddly, the only thing they toned down was the sex. I’m not sure if that was a time consideration or more of the bizarre American stance that violence is fine but sex is a problem.

Ryan Reynolds is entertaining as the Merc with a Mouth, back for more mayhem. He gets a few scenes as himself, not the horribly scarred Wade Wilson, which I attribute to whatever it is sweeping hero movies and tv shows that leads to them wandering around without their masks on so much of the time. Morena Baccarin returns as Vanessa and Leslie Uggams is back as Blind Al, and there are brief appearances by Colossus and Negasonic Teenage Warhead (Brianna Hildebrand). Actually, the “real” X-Men get a hilarious, if exceedingly brief, cameo at one point. Karan Soni is also back as Dopinder, the hapless, comic relief cab driver. Just to make things confusing, they give Negasonic a girlfriend (which is great) but use the same name as a character that’s appeared elsewhere in the X-verse and has ties to other characters, but it’s not the same one.

Among the new characters are Josh Brolin’s Cable and Zazie Beatz as Domino. In the comics, those two are lovers occasionally and teammates frequently. Here, well… it’s complicated. There are a lot of other appearances by various obscure X-Men related characters, but most of them don’t last long. One minor disappointment to me is that two characters who are partners (working, not romantic) in the comics are both in the movie, but never on screen together. There are also a lot of deaths, from the second scene forward, so don’t get too surprised as the body count grows among named characters, not just people for Deadpool to kill.

The basic plot, in broad strokes, is that Cable travels back in time to prevent Firefist (Julian Dennison), a child in the present, from growing up to become a killer in the future. Since Cable isn’t one of the kinder, gentler, X-Characters, you can guess how he plans to do it. This sets him at odds with Deadpool, who grudgingly befriends the kid, and a team Deadpool puts together. There are a few other subplots along the way, some shocking, and a few bigger name characters that pop up for random lengths of time.

It’s a fun outing for the mutants old and new, and there’s lots of great action. That’s almost all the movie is, really, action and comedy, often at the same time. I can’t put my finger on exactly why, but it wasn’t quite as good as the first one. Well worth seeing, sure, but somehow not quite as fun. The last few scenes are a lot of in-jokes, making fun of earlier movies and Reynolds himself. Yes, there are scenes in the credits that are worth staying for.

What I liked: If you saw the first one, you know what you’re getting into. Action, violence, death, and jokes. Brolin’s Cable was dead perfect, and managed to stay an effective bad-ass even amid the silliness of the movie around him. Beetz did a great job as Domino, getting some great scenes. The cameos were well done and some of them I didn’t know about until I checked IMDB (Did you know Alan Tudyk, Matt Damon, and Brad Pitt are all in this movie? I didn’t.) They even sort of snuck in Deadpool’s darker uniform from some of the X-Force books.

What I didn’t: Some characters I really like got smaller parts this time out. Some I hoped for more out of barely made two scenes. Before I get jumped on, please read this carefully as well as what I wrote above: It was really weird to me that they got Deadpool and Cable’s looks perfect from the comics, while Domino was almost unrecognizable visually as the same character. Some of the humor felt a bit more forced in this one than the first.

It’s a fun movie and I recommend catching it in the theater. I’ll give this a high 3.5 out of 5. I’ll definitely go see the next one.