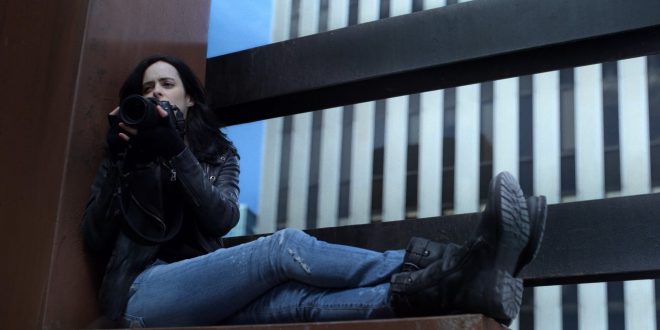 Guess who’s back and on the job?

After teaming up with the Defenders, Jessica Jones returns for the second season of her own show. The only thing I regret so far is that they kept the annoying title trend from the first season. We start off with “AKA Start At the Beginning.” I get it, AKA and Alias Investigations, but still… I guess I’m just not a fan of themed titles.

Continuing the noir theme and feel of the show, this starts with a city street scene and a voice over from Jessica herself, talking about getting things delivered and what you chose to let into your home. This turns into Jessica doing another one of her surveillance jobs. Reporting bad news to a client never goes well, and this case comes with an odd twist that apparently Jessica has been getting since the end of her first season. After dealing with things in her own unique way, Jessica wraps up the scene narrating that, if your door won’t stay closed, build a stronger door. Somehow, that sums her up perfectly.

Next up, we check in with Trish, who is doing a very different kind of job than her usual radio gig, trading on an early part of her career we know she hates. The part of this that got me hopeful was her different hair color, but that doesn’t last. After humiliating herself, we learn why, and it makes perfect sense.

Trish walks down the street, apparently unaware she has attracted some attention as she goes to Jessica’s building. Up on the roof, there’s a very unique entertainment going on which somehow seems very New York. The two friends talk, although Trish is worried about Jessica’s drinking. Then again, most people who know her are. Jessica isn’t happy about Trish talking about supers on her radio show, and Trish says she never mentioned Jessica or “the others” by name, which presumably means the Defenders. They argue about Kilgrave, and what Trish has been up to on her own mission, and Jessica ends up stalking off to go to a bar, leaving Trish in a slightly bad spot, although it’s not wholly clear if that’s deliberate or not.

The next time we see Jessica, she’s clearly having a morning after. Malcolm wakes her up to get her ready for clients coming in, and gets some amusing answers to his questions about how she’s doing. The prospective clients include a woman with a missing son, a guy claiming to have powers and share a connection with Jessica, and someone worried about lizard men taking over. After getting rid of the various people, Jessica and Malcolm talk about which case to take. She offers cynical comments that Malcolm writes down as wisdom, leading to another argument about how many times she has fired him and him not going away. They have a very odd relationship, but then, it’s Jessica.

Before they even get that settled, a new complication arrives in the form of a slick private eye who has a business offer for Jessica that she really doesn’t like. Pryce Cheng is, I’m betting, going to be big problem for Jessica and Malcolm at the very least. After getting Cheng out, and agreeing with Malcolm’s assessment of him, Jessica tries to leave to follow up on a few things, and meets her new superintendent, displaying her powers mostly through impatience. She gets a comment from the super’s kid which irritates her on the way out.

Elsewhere in the city, Jeri is getting a special reward and arguing with her business partners. Jeri mentions bringing in big clients like Rand, so there’s at least a nod to Iron Fist. Jeri has apparently been causing problems for her company, and they seem like they’d be just as glad to see her go.

Trish is on her show and clearly talking about Jessica in all but name. As the show wraps, Trish meets with Ian, who is suspect is going to be her work nemesis. They have some disagreements on the future of her show, but Trish stands her ground. Jessica embarks on her own job, and finds out she’s not as good at being sneaky on this one as she would like to believe.

At Alias, Trish is impressed at how skilled Malcolm is at home repair. That’s a useful talent in Jessica’s life. Jessica comes in, ranting about smug, and then gets in an even worse mood when she finds out what Trish brought her. They argue, and Jessica fires Malcolm again, who leaves with a shrug and a, “See you tomorrow.” Trish wonders if what she’s been investigating on Jessica’s behalf, with or without her approval, is still doing bad things. They argue a bit more about some approaches to a problem of Jessica’s, and Trish ends up leaving. She’s being watched by someone as she goes. Meanwhile, Jessica glares at a picture of Cheng, and then gives one of the saddest toasts I’ve ever heard. Hey, at least she’s using a glass.

Jessica has a bad dream/flashback about the accident that killed her family and started whatever chain of events gave her the powers she’s so annoyed by. She wakes up with Malcolm coming in with a package and telling her a client cancelled. Cheng has sent her something that is another example of him being smug, this is about when her earlier client, who claims to have powers, comes back, and Jessica gets rid of him. Malcolm comments she’s not being nice, and she doesn’t care. She gets in more voice over about people’s secrets as she realizes what Cheng is up to.

Jessica decides to go beat Cheng at his own game, and she’s just as subtle as usual. While she beat him at one small thing, she ends up playing into his hands through her temper. She really needs to get that under control. Things go downhill fast, and Jessica ends up in a mess she can’t really punch or sorta-fly her way out of. Trish, of course, drops everything to help her, and we meet Trish’s boyfriend, a man named St. Clair who seems like a great guy. He’s either the next major villain, or Trish finally caught a break.

After another dramatic exit by Jessica, Trish and St. Clair talk about her being worried about Jessica. He does show a somewhat ruthless streak when it comes to following a story (he’s apparently a reporter, as well). As if she doesn’t have enough going on, Trish gets either a glimpse or a hallucination of an old enemy.

The next day, Jeri has a complication with her schedule that annoys her. We then find out she has a connection to one of Jessica’s current problems, which I can’t say is a major shock. In no time at all, she goes from misguided but I can see it trying to help Jessica to apparently actually working against her.

Jessica goes home and gets a big surprise. One of her earlier clients actually isn’t crazy, or at least isn’t just crazy. Jessica and her almost-client have a kind of unique argument where she gets a lot more surprises both from the client directly and the story Jessica hears. This ends badly for her client and looks like it’s also going to complicate things with her new super.

Jeri gets some really bad news that we don’t quite get details on, and then Jessica is dealing with her problems the way she usually does. Her earlier argument had some very ugly after effects in her office, and Malcolm almost makes it worse before he figures out what’s going on. It’s both kind of grotesque and a very “only Jessica…” moment. Jessica and Malcolm talk, and she actually gives him a real pointer about being a PI, which he’s been asking for. She decides to take things more seriously from her client’s story, and goes and gets a lot of weird reminders about her past. I will say that, with what appears to be going on, she really should have reached out to Luke at the very least. Aside from her making the big mistake of wearing her trademark fingerless gloves and leaving prints, Jessica sees something that may back up something another one of her clients was saying.

What I liked: I missed Jessica, dysfunctional relationships and all. It’s touching how hard Trish and Malcolm are trying to help her. It was interesting seeing something else tie in to Jessica’s murky past. I kind of liked her client she ended up having the argument with. Malcolm’s constantly being fired is entertaining.

What I didn’t: I don’t like what happened to Jessica’s client. I’m not sure what Jeri is up to, but I don’t like it. I get she was upset, but wearing fingerless gloves was just sloppy. Jessica really should have talked to Luke, not for help, but to give a warning.

I’ll give this one a high 3.5 out of 5. It’s good to see our alcoholic, PTSD detective again.