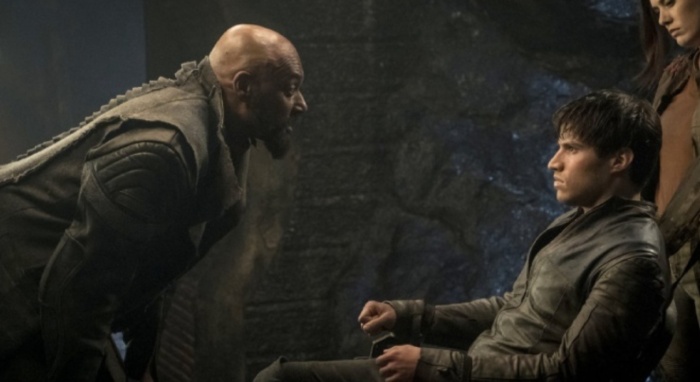 Do you have another chair I could try?

Krypton continues their first season on what seems increasingly like a nastier and nastier planet as learn more about the “House of Zod.” We see Jayna Zod, the Primus and Lyta’s mother, training as a girl under a voiceover about what it takes to be a Zod. They do seem to be collecting names from random corners of the DC Universe for this show. Jayna, of course, is the female half of the Wonder Twins from the old Superfriends cartoon. What we learn is that Jayna’s father was even worse to her than she has been to Lyta.

In the Outlands, black armored troops are hunting for the escaped Seg, who is freezing and suffering badly from the weather out there. So far, nothing I’ve seen there would make me want to visit this planet, either culturally or climate-wise. Seg, in a clever move, doubles back on them and sneaks inside, where he steals various useful tools and then finds another prisoner. He gets her freed and they stagger along trying to get out of the stronghold.

Lyta toys with her family necklace while awaiting trial, and Dev comes to visit her. He comments that since she’s a Zod, she won’t run, and dismisses the guards. They talk about their feelings, their first meeting, and his belief in her. It’s a sad scene for both of them.

Kem and Adam have a scene where they share their concern about the missing Seg, and there’s more of the running joke about Earth slang not translating well. Seg and his new friend, Raika, lurch along corridors until she leads him to a hidden door. The door is marked with a familiar symbol, Raika gets them through it, and then Seg finds a new group with the first different language we’ve seen on the planet so far. The newcomers are not fans of Seg.

Nyssa and Daron bicker about her approaching Primus Zod. It’s a scene with a lot of pent up emotions at least on her part. It also shows the huge differences in the characters, with Nyssa willing to risk a lot for their cause. Daron is a coward and really a stereotype of a corrupt official. So far, he’s my least favorite character on the show. They don’t really come to any kind of agreement, not that I expected one.

A woman tells stories to a group of kids, but gets interrupted when a mob comes through, dragging Seg along. Seg keeps asking them questions, which is foolish at best since we’ve seen they speak something different. Their leader finally shows up, speaking Seg’s language, and he learns they worship an ice goddess who pre-dates the Rao takeover of the planet. Or Kandor at least; we really haven’t seen anything else of the planet. We also learn that Seg’s family is well known to these people, and apparently feared and hated.

Daron goes to see Kol-Da, the trooper that’s been lying about Lyta. We see they are more than just co-conspirators. Lyta does martial arts forms in her cell, and we get more flashbacks of Jayna’s early training. Her family send her and her brother, Vidar (now they’re stealing names from Norse myth) on a really brutal test that would make for awkward family reunions if they do that sort of thing on that world.

Nyssa goes to visit Jayna Zod, and presses her for an answer about the proposal. Jayna is stuck between her honor and her love for her daughter, a dilemma Nyssa keeps hammering on. They argue about duty versus honor for a while, and Nyssa is relentless.

Seg gets patched up, and tries to get some more information from Raika. There’s a loud crowd outside, and she tells him they’re trying to decide what to do with him. That can’t be a comforting thing to hear. Raika tells him she would not have brought him here if she knew he was an El, and he learns a bit about his family’s connection to this place and people. He tries to play on their fear of his family and bargains for a way out. Know that saying about being careful what you wish for?

Lyta’s execution begins, with a full house looking on. Jayna gets another flashback to her family history, which is far from a pleasant one. As Lyta kneels before the sword-wielding executioner, Jayna finally gives in and nods to Nyssa. One quick set of signals later, Daron Vex announces that there has been a development, Kol-Da lied, and he sets Lyta free and restores her rank and position. Lyta looks relieved and Jayna looks stricken.

Lyta tries to figure out what just happened, and Jayna is just as uncommunicative as she usually is with her daughter. Jayna walks off in a huff, while someone attends to some loose ends about the testimony. Jayna works off some frustrations and we see another neat bit of Kryptonian tech.

Daron and Nyssa find a grisly place for their next debate about Nyssa’s actions. Daron continues to be a weak weasel of a character who I really hope meets up with some kind of justice before this season ends. They talk about sacrifice and he wanders off, probably nervous from just hearing the word.

Seg argues with someone who technically isn’t really there, then gets clever. He MacGyvers something together to try and get a hold of Adam Strange. It sort of works, and Seg reaches the lost Earthman, and makes a few requests. Adam seems very worried about Seg, but then, Adam’s future depends on Seg sticking around long enough to at least produce a kid.

Nyssa and Lyta have a talk, with the confused Lyta trying to catch up. She’s not stupid, she just has been kept in the dark about all the deals and machinations going on around her. The women debate about theology briefly, and then Adam shows up, needing Lyta’s help. Adam brought her a message, which Nyssa overhears from her hiding place in the shadows. Lyta springs into action, dragging Adam through someplace that actually makes the brash Earther uncomfortable before setting off on save our hero.

Seg gets found, but not by his preference. He ends up tied to that same chair as before as the Commander looms over him. He rages that Seg needs to tell him what happend to Raika, as she is the key to stopping Brainiac. Lyta and company show up for a timely rescue. Lyta confronts the commander, and we learn things are a lot more complicated than we thought as Lyta relies on her usual combat technique of getting beaten on badly until pulling off a last minute surprise. It sounds like a painful way to fight to me.

What I liked: The revelations near the end add a whole new layer into the complications that are going on around Seg and Lyta. While I don’t trust her, I’m starting to like Nyssa. The glimpses of Jayna’s family life make her a more sympathetic character, which I’m sure was the point. The new group was a surprise, as was their separate language and religion.

What I didn’t: Kem, aside from one scene so far, seems to relegated to comic relief, and I’d like to see more from him. He’s one of the only major characters who we don’t even know what House he’s from. Daron is spineless and annoying.

I’ve drawn the parallel before between this show and Gotham, but I like Gotham better. This one’s just not really grabbing me. I’ll give this episode a low 3 out of 5, and hope for improvement.