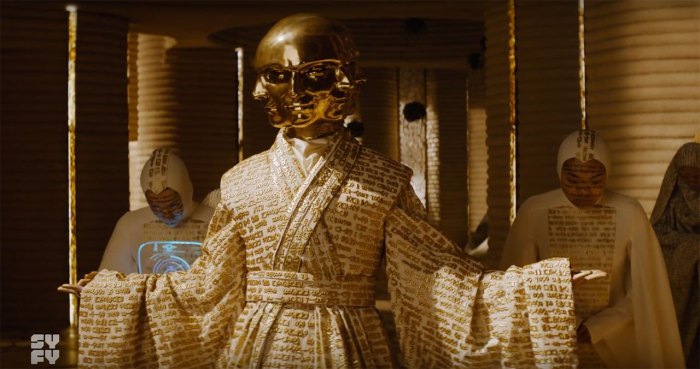 So if two-faced is supposed to be bad…

Things are getting worse for Seg-El and his band of scruffy miscreants, as Krypton’s first season continues with us hearing from “The Word of Rao.” The show opens with the Voice himself in his chambers, talking to his acolytes. Due to the unrest following the failed Rankless Initiative (last episode), the Voice has decided to move up a religious ceremony. I don’t know how complicated their Nova Cycle is, but can you imagine just suddenly making Christmas earlier? The Voice also puts on the strange gold mask he’s been wearing and starts the day, apparently literally.

Back at the communications hub that was such a big part of last episode, a group of apparently fake guards take on some real ones to get inside. As that bit of violence goes on, Val studies Rhom at the Fortress, saying there’s nothing he can do for her. The alien tech is beyond him, and he says Rhom only has hours left. Seg is worried about how Ona will take this news.

At the Military Guild, things aren’t looking great for Lyta Zod, either. She’s been summoned to the Intelligence Committee for her actions during the failed Initiative. Lyta also gets lectured by her mother, the Primus. Lyta’s not having a great day. Seg and Adam walk through the streets of Kandor, with Adam making Star Wars references Seg can’t possibly get, and Seg worried they’re being followed. Lyta and Dev-Em get a brief but touching scene about their feelings for each other.

The Voice walks the streets in a serious miscalculation, and witnesses first hand how bad things are getting. The Voice goes to Daron-Vex and tells him this must be handled, and someone in authority must take the blame. I guess politics are the same on every world and time. Lyta gets interrogated about her decisions, and Daron seems to get around really quickly to do it. Daron ups the stakes and shocks both Lyta and Mother Primus.

At Kem’s place, the barkeep is worried about Ona losing her mother, reflecting on when he lost his family. Adam stalks outside, apparently missing smoking, a bit of stupidity that seems confined to Earth. Ona talks about her belief that her mother will be fine, since she is praying for it, and Kem and Seg share bad news about Lyta.

Seg tries to talk to Lyta, and runs afoul of first Dev-Em, then Primus Zod. The Primus is blaming all Lyta’s troubles on Seg and his family, which is actually semi-legitimate, if a bit skewed. Seg leaves without being able to see Lyta.

Nyssa shows us a cool little trick of Kryptonian tech, and then shows Seg a lot more when he comes to her for help with Lyta’s case. Nyssa does some cat and mouse with Seg about his motives before agreeing to help. Daron has set up a few more things to make things even worse for the young Zod.

Adam is furious when he hears what’s happening to Lyta, which is a bit odd. He not only doesn’t know her, but the name Zod isn’t exactly one that Earth’s heroes are fond of. He’s also worried about Rhom, then moreso when Seg wants to bring her to the Council to show the claims about Brainiac and alien life are true. Seg loses his temper with Adam, stalks off, and then gets a nasty surprise from some of the fake troopers we saw near the beginning of the episode.

Primus Zod goes to visit her daughter in her cell, and Lyta isn’t thrilled with the company. The Primus doesn’t think her daughter deserves death, and shares her beliefs about Lyta’s problems. Lyta doesn’t agree, and they argue about trust. They get interrupted when Nyssa comes in, claiming to now be Lyta’s advocate and telling the Primus she needs to leave. Seg, for his part, wakes up in worse circumstances than Lyta, and gets tortured in a way that fans of Star Trek II: The Wrath of Khan might find familiar.

Lyta and Nyssa talk, not so much about her problems at first, but about Seg. Nyssa does mention he’s missing, and then goes out of her way to be a bit obnoxious about her relationship with the young El. They finally get around to the case, and Nyssa asks about Kol-Da, the trooper Lyta arrested who seems to be the source of a lot of their troubles.

Seg finds out his captors are very well informed about things he thought only he and his circle knew. If Seg is still doubting Adam at this point, he’s being an idiot. The torture wasn’t for fun or to make Seg talk, it was a test. Seg and their leader, only referred to as Commander, spar about the alien menace and what’s going on to threaten their world. Seg keeps being snarky, gets zapped again for it, and we see the Commander is not what we’d call a good guy, kidnapping and torture to one side.

Kem talks to Ona, and we learn more about his background. Kem is really, touchingly, worried about Ona and her future, making him yet another rogue with a soft heart ala Han Solo. You know the type. Ona and Kem make plans to go to the Nova Cycle so she can pray for her mother.

Nyssa goes to her father, upset about his interference in Lyta’s trial. I have less and less respect for Daron-Vex as this goes on, and never had any at all for Kol-Da. They argue back and forth about their grand plan. Their ambitions are a lot higher than I realized. We also learn why Seg is so important to their schemes.

Seg and his captor argue about the man’s methods, and we find out there is some shared history between these two. The man is focused on finding the Sentry (still a bad name), and is a lot more ruthless about dealing with the threat than Seg. We also find out that Lyta is being held prisoner in Fort Rozz, a place that plays a big part in the first season of the Supergirl series. Seg and the Commander make a deal to show their good intentions.

Kem and Ona go to the festival and, in part due to the tensions in the sector, things get out of hand quickly. Kem does some inspired pleading on Ona’s behalf, and the Voice does something no one saw coming. At least Ona will be well cared for, and the Voice isn’t completely heartless.

Adam gets to the fortress and there’s some banter about his name and a passing reference to a certain, much better known, Doctor. Thing are looking bad for Rhom, despite Val’s efforts. She wakes up, makes a desperate plea, and then dies. Unfortunately, she didn’t finish what she was saying, leaving behind a puzzled Adam and Val.

Despite having struck a deal with the Commander, Seg stages an escape which turns ugly. Nyssa finds Primus Zod and makes a few suggestions, which the Primus isn’t willing to listen to. Nyssa is neither subtle nor nice, but then, Lyta is running out of time.

The episode wraps with several scenes that jump around a lot. The Commander disciplines people for “letting” Seg escape. Ona shows up in her new role, providing some voice over for Primus visiting Lyta, Seg escaping, and Kem looking happy for once. The very end of the episode shows us what Rhom was trying to say, as something really bad happens to one of the most powerful people we’ve seen on Krypton so far.

What I liked: It was nice seeing another side of Kem. I’m not sure what to make of Nyssa, but she’s at the very least aiming high, which I can admire. Lyta is standing by her beliefs, which is good in general, but maybe not for her personally at this point. It was an interesting reveal that the Commander knows a few things that surprised Seg so much.

What I didn’t: Adam had a smaller part this week, and, while I disagree with using the character, he’s at least entertaining. I’m not sure what Seg was doing, taking such a huge risk after seemingly coming to an agreement with the Commander. Daron is a spineless, cowardly stereotype of a corrupt government official, and I’d really be ok with it if he met an ugly end.