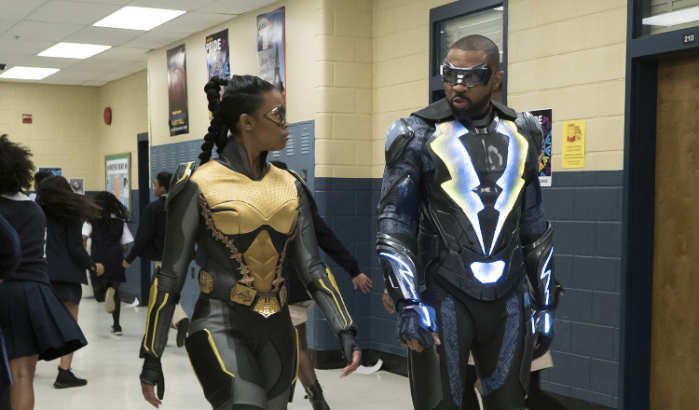 Too cool for school… in school.

Black Lightning’s first season continues, along with their tendency towards elaborate titles, in “The Resurrection and the Light: The Book of Pain.” This starts with an unholy alliance as Tobias Whale wakes up from his extensive medical treatment at Proctor’s ASA facility. They talk about Lady Eve’s death, opportunities, and the history of Green Light and metahumans in Freeland. Whale shows Proctor he’s smarter than the government agent gave him credit for, and Proctor gives Whale an assignment.

Lynn calls Jefferson to come over under somewhat false pretenses, but he doesn’t end up minding that much. I’m not quite clear on where she called him to, since last I knew they were all hiding out at Jefferson’s father’s place, but that’s kind of beside the point. They have a good reunion, show a creative use of his powers, and then have a longer talk afterwards. They come to an agreement about a future plan that I think is a horrible idea.

While Tobias Whale gets back to his usual style of management, Jefferson is shocked to see Khalil walking by. Jefferson tries to reach out to him, and it goes badly. Khalil has a new attitude to go with his new look and new spine. Jefferson seems actually concerned about his former student, but the encounter doesn’t really go well. Khalil walks off co-opting one of Jefferson’s mantras.

Surprised, Jefferson consults his tech expert, Gambi. Gambi is surprised that a poor kid has some expensive tech in him suddenly, and suspects Proctor and the ASA are involved. Gambi goes off to confront the weapons maker Hildago, and, when Jefferson is worried about him, has a stark if realistic come back as he leaves.

Lynn and Jennifer banter about power suppression and cakes, while Jefferson follows up on his Khalil sighting by going to visit the young man’s mother. She’s no help, and seems genuinely surprised to learn what Jefferson has to say. Gambi gets his errand done with some cutting words and threats.

Jefferson looks in on his youngest daughter and tells her about Khalil’s apparent return. He warns her to stay away, that Khalil is a different person now. He shares some suspicions about what Khalil is up to, and she doesn’t want to hear or believe it. Jennifer then surprises her father by her spin on recent conversations with her mother. Jefferson isn’t happy to hear this and stalks off, and Jennifer listens to her father’s instructions for a whole ten seconds or so.

An enraged Jefferson confronts Lynn over what Jennifer told him. The man is really mad and Lynn is stunned at his reaction. Jennifer, who seems to be the Pierce family champion for bad ideas, sneaks off to meet Khalil. She’s at least smart enough to be a bit suspicious, when ends up ticking him off. Khalil makes his own dramatic exit, showing that his enhancements do more than just let him walk.

Whale lays out his plan to find Black Lightning, using his usual calm and steady management style with Khalil. Lala is using a similar style when he gets a call and leaves mid-beating… err, meeting. Lala’s new mission impacts something Gambi was doing, and one of them is going to be disappointed. Lynn and Jennifer talk about what Lynn’s actually trying to do, pre-calc, cake, and bad options. Anissa, Gambi, and Jefferson plot down in the Sanctum about how to find the missing kids, and get interrupted by word of an attack on Garfield High.

Khalil is on a rampage at the school, and shows he has no kindness in him for former fellow students. Jennifer tries to talk him down, but he’s not going to listen. He does, at least, warn her to get out. Vice Principal Fowdy stops being a traitor long enough to try and get her students out of harm’s way. Black Lightning and Thunder show up, doing the cool slow walk into the school. The heroes split up to save as many kids as they can, and, due to the demands of secret identities, treat Jennifer like just one of the students. I wonder if she’s regretting not training with her powers yet?

Thunder finds a classroom full of kids being held hostage by Syonide. In a fit of un-villain-like behavior, Whale’s trigger-woman lets the kids go as soon as Thunder shows up, and then finds out the meta-hero is fairly bulletproof. This degenerates into a nasty fight between the two of them, and we get a hint that Syonide isn’t quite what she seems. A concerned Jennifer looks on and tries to summon her powers to help. You know when you don’t do your homework, you’re not ready for the test?

Black Lightning squares off with Whale, who is unfortunately well prepared. Gambi figures out what’s going on and gives Black Lightning some great advice which the hero promptly ignores. That seems to be a Pierce family trait. In the other room, Thunder gets worn out and Syonide gets the upper hand in their fight. For some reason or other, this kicks both of their fight skills into higher gear as they start pulling off some impressive moves. Black Lightning gets in over his head, and then gets saved by a surprising combination.

“Saved” doesn’t mean “all is well,” and the Pierce family is taken to a previously unseen cabin in the woods by Gambi. Lynn goes to work on her wounded ex, while Gambi does everything he can to make them hard to find. Proctor rages at his plan not working how he had wanted, and barks out new orders. Whale stays true to himself and begins enacting his own agenda to end the episode.

What I liked: Black Lightning and Thunder make a great team, and they are both clearly devoted heroes. Gambi has a dark, but realistic, sense of his place in the scheme of things. Whale’s plan, while simple, showed good insight. Proctor making use of Whale made sense and is very in character from what we’ve seen.

What I didn’t: Khalil went to the dark side pretty damn fast. His weird outfit during the big attack didn’t make a lot of sense. I can understand Black Lightning’s initial attack against Whale not working in their final fight, but it seems like he managed to miss a few tricks there. His ignoring Gambi’s advice there was just foolish. Where’d this cabin suddenly come from?

I really enjoy this series, even with this episode having a few flaws. I’ll give this one a 3.5 out of 5.