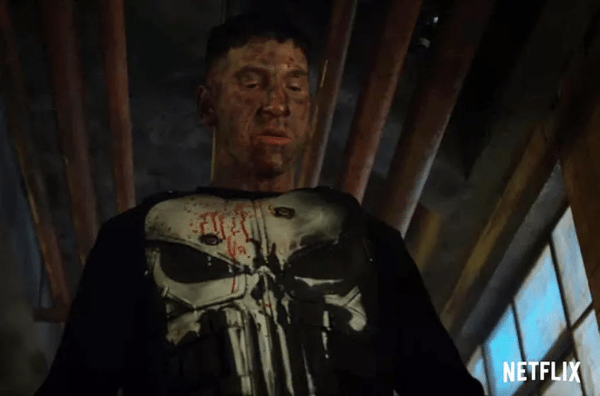 Really, why would you make an enemy of this man?

Punisher’s first season is speeding towards the end as subplots collide and separate parts of the show start coming together, not in the best of ways for those involved. This episode does change a lot of the status quo so far, and I’m not sure what we’re going to end up with at the end of that thirteenth episode. This is a mess, that’s for sure. The episode is called “Danger Close” which is a term for calling in an artillery strike way too close to your own position, among other things.

The show opens with Frank staring into the stereotype barrel with a fire in it, wrapped in a blanket from… somewhere. There are several of these barrel fires where he is. I’ve never seen one of these in the real world. Does this happen? Anyway, as he gazes into the flames, which utterly destroys your night vision, Frank has various flashbacks about Russo, struggling to come to terms with one of his few friends betraying him like this. Russo goes on tv, making Frank sound completely crazy. David and Madani both watch this with varying degrees of dislike. Frank finally lurches in to the hub, bloody and battered and glaring at David.

Frank is trying to patch himself up, and he really looks horrible in this scene. David finally persuades Frank to let David help. David does a bit of a recap of recent events, which actually makes sense because he wasn’t there and is trying to make sure he has this right. He mostly gets grunts for responses. David talks about his childhood ambitions, and Frank berates David for taking action without him. Which is rich, coming from Frank of all people. David did have some reasonable motivations for doing what he did, but Frank really isn’t in the mood to listen. Or think.

After a scene showing how the reveal of who “Pete” is effects Sarah and the kids, Russo goes to Homeland for a not real friendly chat with Madani. It’s not really productive, and they both get personal. She makes him an offer he refuses, and she does a really great threat to close out the scene. If I was Russo, I’d be worried.

Rawlins and his boss, Marion James, go for a walk by the river. They really love using waterfront settings for this show when people talk, or blow things up. He slowly reveals some of what he’s been up to, and she is not happy. Ever the scheming little psycho, Rawlins threatens her and outlines a plan for what they should do. Not that I doubted it at all, but Rawlins is only loyal to Rawlins. As they cut a kind of deal, Frank is painting up some body armor with his trademark symbol.

Madani and her boss, AD Hernandez, go over her less than successful interview. He’s pissed at her, and she defends at least some of her actions. In her defense, remember, when she and Russo started dating (for lack of a better word), she had no idea how deeply involved he was going to be in all this. Hernandez wraps it up with an interesting suggestion that makes it sound like he’s got her back, at least for a bit.

Sarah and her kids suffer a nasty home invasion from disguised operatives of Rawlins. This is another complication caused by Zach’s bad attitude. It’s cosmically unfair that this annoying punk kid is still alive while Carl on Walking Dead is gone. Anyway. Sarah and Zach don’t do too well here, but Sarah manages to help Leo get away. I swear, that kid is the only one in this family with her head on straight.

David mocks Frank’s new paint job and he says some things to Frank not a lot of people would either dare to do or survive the process. Their argument has the potential to break up their rough partnership, but it gets interrupted when they notice the monitors at David’s house. David freaks out and Frank makes him pull it together. Frank figures out the bad guys are going to be coming for them, so he sends David off to collect Leo while he gets ready for company. He’s not exactly putting out a cheese plate. With some cameras and phone work, they find Leo and Frank sets up a meeting. He persuades David to go and sets up some contingency plans.

Sarah and Zach are not enjoying their new accommodations. As she tries to reassure her son, Russo and Rawlins talk about David being alive after all, blaming Carson Wolf (remember him?) for this intel failure. Rawlins manages to look worse than Russo as they talk, and that takes some doing at this point. Russo is at least planning to go into this fight in a smart way.

AD Hernandez sets his own plan in motion by working a few connections. He calls Marion James in for a chat about what Rawlins has been up to. Sadly, Marion has gotten over her initial outrage and had time to revert to government “cover your ass” mode, which is probably a default setting for a lot of people at her level. She sort of denies, then goes to a kind of “even if it’s true, you can’t go public with this” defense. I was halfway liking her up to this point, but she’s gone from unknowing dupe to actual accomplice. She leaves and Hernandez offers a few suggestions.

Punisher gets ready for his coming company with some dramatic music playing, while David has a tearful reunion with daughter Leo. I’m glad they’ve finally let those two get back together at least. Then comes the big fight we knew was coming. Russo’s operatives storm the hub, and it’s a really ugly fight as Castle mows through them, stalking the first few silently. He and Russo taunt each other over the radio Castle captures in the carnage. Russo is definitely going to need to start putting out some help wanted ads if he lives through all this, which I really hope he doesn’t at this point. They finally arrange a swap of Frank and David for Sarah and Zach. I’m sure that’s going to go flawlessly with no issues.

Marion has a heated exchange with Rawlins, shaken and angry after her meeting at Homeland. David and Leo have some awkward conversation while they wait for “Pete.” The episode ends with an unexpected gathering of allies on one side, and Russo getting more bad news from his men on the other.

What I liked: I thought this was another good episode. Frank’s shock and disbelief at the beginning was believable, and offset nicely by his rage as he dealt with Russo’s men later. Leo showed she’s clever and capable, as opposed to Zach’s whininess and self-centeredness. David’s panic at Sarah’s capture worked nicely. Hernandez and Madani working together, finally, was long overdue.

What I didn’t: Marion covering her ass was disappointing. Zach’s role in their capture has me liking this pain in the ass kid even less. Russo is slimy but Rawlins is worse, and I look forward to both of their most likely impending gruesome deaths.

This series has been great beginning to end. I’ll give this one a 4 out of 5. The end is moving close quickly.